Although season 1 ends in the same way that Margaret Atwood's book does, the story is ready to leap off the page 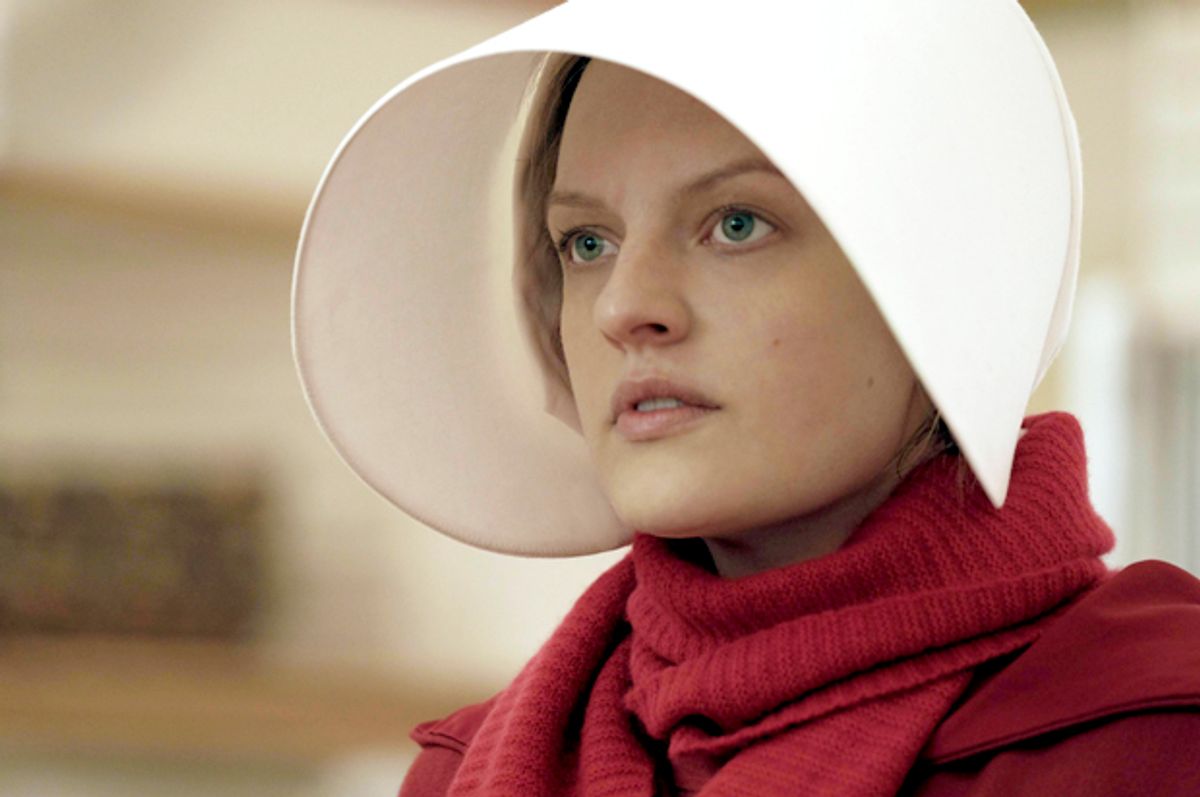 Elisabeth Moss as Offred in "The Handmaid's Tale" (Hulu/George Kraychyk)
--

Often it’s the small acts that set fire to uprisings — the casual disrespect of a memorial, the refusal to relinquish a bus seat. The deliberate dropping of a stone, followed by a carefully worded apology delivered in measured tone. “I’m sorry, Aunt Lydia,” Offred says in the season finale of “The Handmaid’s Tale,” released on Wednesday on Hulu.

Offred, played by Elisabeth Moss, offers her regrets this way twice during the episode. The first time occurs in a memory sequence as she recalls the initial moments of her capture, as she shudders with fear upon meeting her captors and looks at a uniformed Handmaid — a version of her future self — the wrong way. Lydia (Ann Dowd) physically corrects her, making sure her hands are folded and her eyes sufficiently downcast.

The second comes near the hour’s end, as Lydia orders the Handmaids to stone an offender to death. The women deliver a similar version of capital punishment (called “particicutions,” in Margaret Atwood’s novel) to an alleged rapist in the season premiere. His guilt or innocence is never confirmed; all that’s known is his purpose is to be an emotional release valve for the Handmaids, who beat him to death, with Offred leading the charge.

“Handmaid’s Tale” showrunner Bruce Miller wrote the script for that episode and for “Night,” making this return to Gilead’s government-sanctioned killing ground an act of coming full circle. For this time, the offender is Janine (Madeline Brewer), the woman driven crazy by this new world order. Janine survived a gang rape in her pre-Gilead existence only to have her survival depend on her willingness to submit to rape over and over in the new. It becomes too much; she threatens to kill herself along with her infant in the ninth episode, sparing the child and failing in her suicide attempt after that. The government and Lydia save Janine’s life — only they, through the Handmaids, have the right to end her.

But in that moment, the women refuse. First, Offred’s walking partner Ofglen voices her dissent and takes a rifle butt to the jaw for stepping out of line. Then Offred steps up, eyes fixed on Lydia’s gaze. Earlier in the episode Offred finds out she’s pregnant, and therefore she knows she’s untouchable. She drops the stone she was meant to employ for murder, and the other Handmaids follow her example. Offred apologizes in the way that she was taught, even as she refuses to do as she’s told.

Maybe this is how this resistance finally gains steam. Or it could mark a horrible new phase for Offred, who starts to let a few people know she hasn’t forgotten that her real name is June. Atwood’s novel offers no definitive hints about what lurks ahead for Moss’ Handmaid, since the book ends with her being led away by armed men and shuffled into a vehicle bound for places unknown.

From there the novel veers into an epilogue set many years in the future, following the collapse of Gilead. Hulu granted the series a second season, placing the onus on Miller and his team of writers to determine where that van takes Offred and what happens after that. Dedicated viewers have little to fear in that notion, considering season 1’s firm command of tone and structure.

It is tempting to call these initial 10 episodes of “The Handmaid’s Tale” demonstrably flawless; that would make a tremendous pull quote for the streaming service’s PR team, but it’s not completely true. Certainly “The Handmaid’s Tale” has hit audiences at the perfect time, speaking to our fears and stoking people’s anxieties.

Hulu’s careful releasing of a few episodes at a time has enabled people to feast to satisfaction as opposed to bingeing and moving on. The uncanny similarities that the events of its worst-case-scenarios bear to real-world political developments have ensured that we cannot comfortably move on, even if the freshman season is officially spent.

Undoubtedly this set of episodes is fueled by outstanding performances, led by Moss’ sublimely furious portrayal of Offred-June, Yvonne Strahovski’s sympathetic yet twisted Serena Joy and Dowd’s malevolently righteous Lydia. But the strength of these episodes is in the plotting, writing and direction. Any series that paints a dystopian future governed by laws that are simultaneously chillingly familiar and unfathomable requires a fair share of world building in addition to character development. “The Handmaid’s Tale” constructs Gilead as an archetypical example of how damaging and corrupting a patriarchal structure can be to both men and women, how both sexes play a role in its creation as well as its dismantling and how everyone eventually pays the price.

Miller and his writing team do this through integrating character-development storylines, told in flashback, in a number of episodes. This means the drama's opening hours portray life before Gilead’s takeover through the lives of June, her husband Luke (O-T Fagbenle) and her best friend Moira (Samira Wiley). As the story evolves, the audience is also granted views of the former lives of Max Minghella’s steady and inscrutable Nick, Offred’s lover and the household driver, as well as those of Serena Joy and her husband, Commander Fred Waterford (Joseph Fiennes), to whom Offred belongs for the time being.

And it is their stories that contain the more chilling messages about how simple it is for democracy to tumble into totalitarianism and how well-meaning people play a part in pouring the foundations upon which the bricks of an evil world are stacked.

Nick is an “Eye,” but only because he happened to have no other options in the former world. He’s also presumed to be the father of Offred’s child and, with a faint whisper to her before she’s taken away, he may play a part in helping her stay alive in coming episodes.

Serena Joy was once a published author whose ideas influenced the formation of Gilead’s government; in one exchange in the finale, she reminds her husband that she helped write the laws that now make it illegal for her to read — or play Scrabble with her husband.

Collectively these small moments saturate “The Handmaid’s Tale” with a potent sense of tension and even some version of wryness. Short but telling sequences throughout the season, such as a simple scene of watching servants clean house in the aftermath of Gilead’s takeover, serve this purpose as well. (In that scene we see Nick walk out to the curb in front of the Commander’s house a box of feminist literature authored by women . Serena Joy is forbidden to admit she’ll miss those books, but Nick probably resents tossing away the sexy pumps placed on top of them.)

There’s always room for improvement with any new series, and in the show’s second season Miller would do well to rectify the drama’s glossing over of race relations. In fairness Atwood didn’t hone in on racial strife too profoundly in her novel beyond Offred’s report that the black population (called “the Children of Ham”) is being relocated, which she intended as a reference to South Africa’s system of apartheid. Miller and his fellow executive producer Ilene Chaiken also intentionally cast Wiley and Fagbenle in major roles and pleasantly surprised viewers by revealing that Wiley's presumed-to-be-dead Moira is actually alive, albeit designated a Jezebel and relegated to a whorehouse.

More than this, both she and Fagbenle’s Luke, June’s husband, remain alive and well as the series heads toward its second season. Actors representing a host of ethnic backgrounds can be seen in the ranks of the Handmaids, so that’s worth noting. It’s hard to ignore the fact, however, that the ruling class is almost exclusively white, which in a fundamentalist regime has to be intentional but is never explicitly explored. A black man sits on the Commanders Council, but he has no lines and he visually blurs into the background of the conversing figures. In other scenes brown and black characters blend into the periphery.

Luke and Moira are the only characters of color that are fleshed out, but what we know of Moira’s backstory is revealed through flashbacks to Offred’s life as June. Again, “The Handmaid’s Tale” will be back for a second season, so these are issues Miller’s team can explore next year. And perhaps the producers might consider hiring a few writers of color to help them do that.

If that’s the case, it’ll also be helpful to remember that a Handmaid played by a multiracial actor, Tattiawna Jones, actually inspired Offred’s act of resistance and paid a hellish physical price for it. This, too, is an unavoidable truth of rebellions: Often the people who have the lowest level of protection pay the highest price before others are emboldened to stand with them. But wherever viewers find themselves when “The Handmaid’s Tale returns,” the next battles promise to be thrilling. Offred says as much: “They should have never given us uniforms if they didn’t want us to be an army.”