Will Trump fire the special counsel? If he does, don't assume Republicans will save us 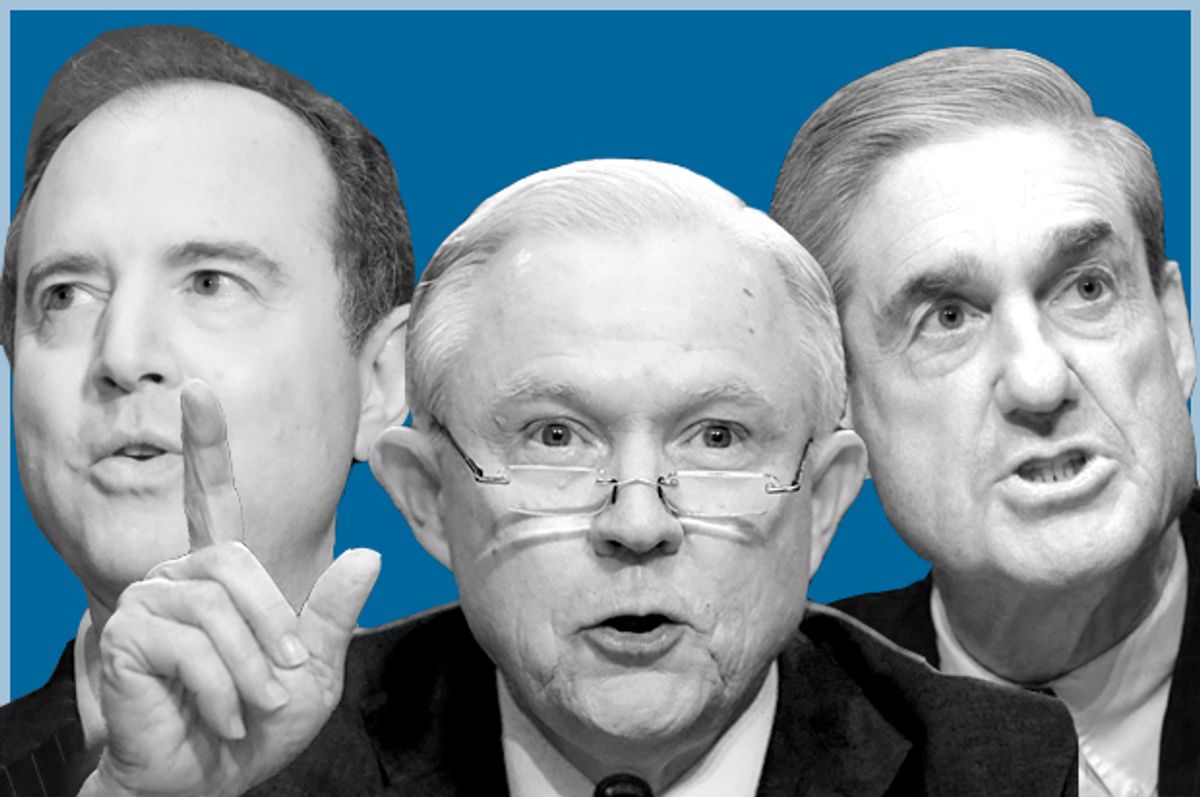 Facebook
Twitter
Reddit
Email
Another week, another day of dramatic testimony from a Department of Justice official about a counterintelligence investigation of possible collusion by the president's election campaign and the Russian government. Ho hum. Tuesday's episode featured none other than Attorney General Jeff Sessions, who insisted that he had never even thought about the Russian interference in the campaign before he recused himself. This may explain why fired FBI Director James Comey testified that he and other high-ranking Justice Department officials were so sure Sessions' recusal would be imminent from the beginning of his term.
It was obviously extremely odd that an attorney general would not be interested in an assault on the country's electoral integrity and would not seek some way to thwart this happening again in the future. That Comey and others gave Sessions the benefit of the doubt by assuming he was simply trying to avoid the obvious conflict was actually quite generous. Someone else might conclude that he simply didn't care — or worse, that he was personally implicated. (A Washington Post article by Philip Bump has pointed out that Trump's lack of interest in the issue is equally startling.)

In any case, Sessions' testimony was mostly marked by his refusal to characterize any conversations with President Donald Trump by evoking some strange new extended version of executive privilege that has never existed before. And the problem with these claims of privilege based upon rules he was making up on the fly is that special counsel Robert Mueller will not care about any of that if he decides to investigate Trump for obstruction of justice, convenes a grand jury and calls Sessions to testify about those conversations. Nobody knows if such an investigation has been opened, but we know for sure that Trump is very upset about that possibility.

Reports this week that Trump has talked about firing Mueller have been corroborated by numerous sources. The topic also came up during an earlier hearing on Tuesday in testimony by Deputy Attorney General Rod Rosenstein, the man who appointed Mueller. Rosenstein told a Senate Appropriations subcommittee he has no reason to believe that Mueller has done anything untoward and  he would not fire him simply because the president ordered him to.

For now, the White House has said Trump has "no intention" of firing Mueller, but administration officials insist he has every right to do so. Apparently it took some hard work on the part of Trump's staff and friends to get him to agree to that. The reports that Trump was considering firing Mueller bubbled up from the right-wing fever swamps over the weekend. Newsmax CEO Chris Ruddy, a good friend of Trump, was the one who intentionally thrust it into the mainstream on Monday night. According to CNN's John King:

Chris Ruddy achieved his goal. His goal on going on television was to start a conversation in Washington about this so the president could see and today the speaker of the House and any number of other Republicans said, "Whoa whoa whoa, let Bob Mueller do his job, Bob Mueller is doing a fine job, I respect Bob Mueller." Why would a friend do that? Why would a friend go on television to influence a friend? Because friends who have talked to the president about this [say] that he sounds very much about Bob Mueller — venting about this unaccountable investigation that he has no control over — the way he sounded about James Comey right before he fired him.

On Tuesday evening The New York Times published a behind-the-scenes look at the issue that shows the president once more to be the most infantile 71-year-old in history.

But people close to Mr. Trump say he is so volatile they cannot be sure that he will not change his mind about Mr. Mueller if he finds out anything to lead him to believe the investigation has been compromised. And his ability to endure a free-ranging investigation, directed by Mr. Mueller, that could raise questions about the legitimacy of his Electoral College victory, the topic that most provokes his rage, will be a critical test for a president who has continued on Twitter and elsewhere to flout the advice of his staff, friends and legal team.

If you thought Trump's mistaken assumption that firing Comey would be popular with Democrats was obtuse, his understanding of how his threat to fire Mueller would bring him the result he wants is mind-boggling. The Times further reported as follows:

The president was pleased by the ambiguity of his position on Mr. Mueller, and thinks the possibility of being fired will focus the veteran prosecutor on delivering what the president desires most: a blanket public exoneration.

The man is a skilled con artist who can easily spot a gullible mark, but his understanding of intelligent people who have power and independence is sorely lacking.

According to the Times, Trump has calmed down for the moment, but nobody knows how long this will last. The question then is what happens if he actually fires Mueller?

The ranking member of the House Intelligence Committee, Rep. Adam Schiff, D-Calif., told Greg Sargent of The Washington Post he believes that if this happens it will spur the Republicans into action and Congress will immediately pass an independent counsel law with enough votes to override the president's veto. It's a nice thought but I think he's being wildly optimistic.

Here's a sample of where the Republican Party stands on the Russia scandal:

Rep. Sean Duffy, R-Wis., echoed this notion on Fox News, saying, “What the hell are we investigating? Why are we going through with this charade?”

As Sargent's article pointed out, changing course would require that Republicans pretend "they have not actively enabled the serial trampling on rules, norms and constraints — the abuses of power and contempt for the rule of law and our institutional processes — that have characterized Trump’s presidency since the beginning."

Trump already fired the U.S. attorney for the Southern District of New York who was examining his business dealings, the acting attorney general for refusing to violate the Constitution with his ill-fated Muslim ban, and the FBI director who refused to swear a loyalty oath and back off investigating his campaign's ties to Russia. The president has shown that he's more than willing to flout any rule, norm or law that gets in his way.

And the Republicans have gone along with him at every turn. We simply cannot assume that they will save us. They're in on it.