Republicans, the Second Amendment and gun violence: Will the GOP ever return to sanity?

Second Amendment purists have pandered to our worst instincts for years. Will they ever face the consequences? 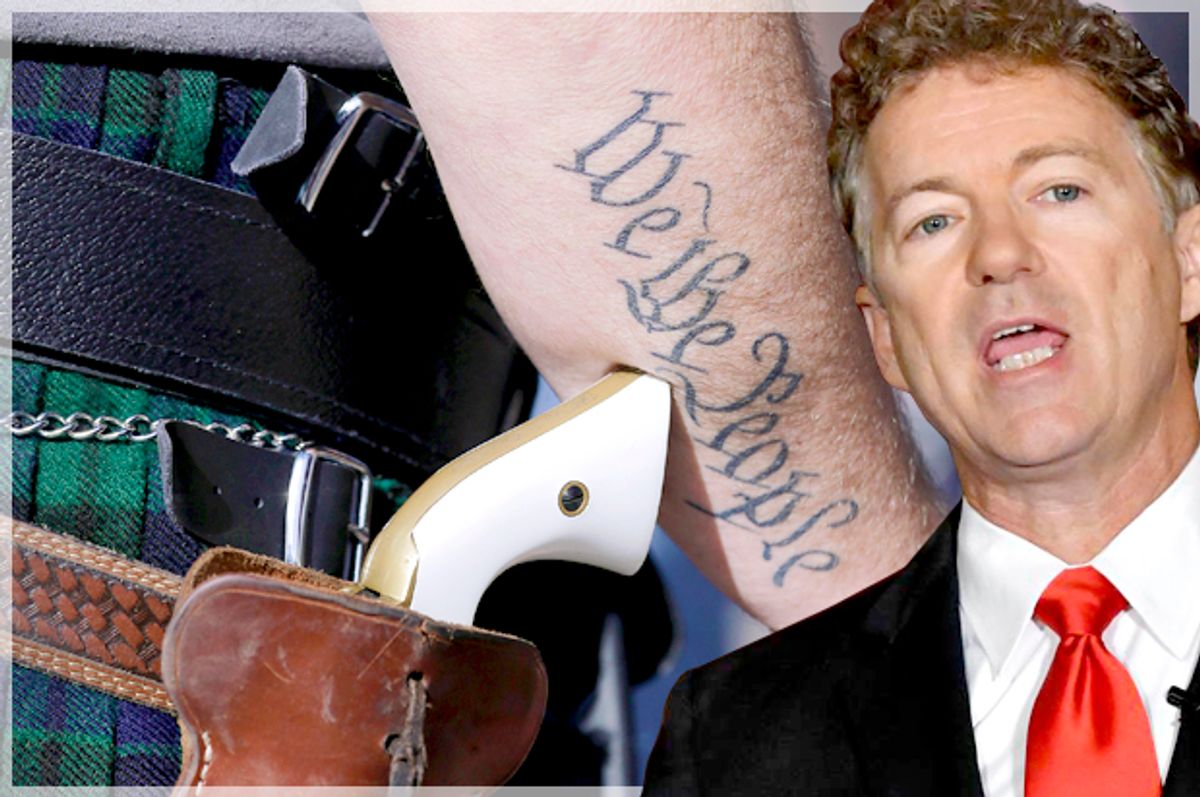 This story has been updated to clarify the context of a tweet from the account of Sen. Rand Paul.

Having been born and raised in Northern Virginia, I can clearly envision the not-yet-sweltering June morning on the baseball field in Alexandria — the humid, hazy mid-Atlantic air synonymous with D.C. summers not quite oppressive enough to chase people indoors, the fresh-cut grass of the field, the crunch of the infield dirt and the metallic ping of softballs against aluminum bats punctuating an otherwise normal day. All that was shattered Wednesday morning when a gunman opened fire on a congressional softball practice involving, among others, the House majority whip, Steve Scalise of Louisiana.

The Republican leader is a familiar face for those of us who follow politics religiously. You might know him from this frequently memed photo laughing with Speaker Paul Ryan. That’s Scalise, not doppelgänger Sean Spicer, in the middle of the frame. He was reportedly shot in the hip by 66-year-old James T. Hodgkinson, a clearly disturbed man who officials say was an avid supporter of Sen. Bernie Sanders. As of this writing, Scalise is in critical condition at MedStar Washington Hospital Center. Meanwhile, during the melee, Hodgkinson was shot by first responders and later died from his wounds. Five people were wounded in total, and the shooter was the only fatality.

As with most of these mass shootings, we can practically recite the details by memory, as if reading from a script. Thoughts and prayers. Calls for legislative action. Finger-pointing. Even a few wild conspiracy theories tossed in to underscore the digital democratization of journalism. We all have our pet issues and our own ways of dealing with catastrophes like this, even me, and other than the knee-jerk, loony conspiracy theories, there’s nothing wrong with acknowledging the tragedy then moving on to considering how best to prevent another one from happening. As David Frum wrote in the wake of the Alexandria shooting: There was a massive apartment fire in London yesterday, but is it too soon to talk about fire prevention and safety? Nope. Having lived through two house fires myself (long story), I assure you, it’s never too soon.

It’s also never too soon to be reminded that back in February congressional Republicans overturned an executive order known as “the Obama rule.” During the final lame-duck days of his administration, President Barack Obama authorized a new rule for augmenting the National Instant Criminal Background Check Improvement Amendments Act of 2007. The rule required the Social Security Administration to provide the names of people receiving disability benefits for mental health issues who aren’t personally managing their affairs, indicating a serious psychological incapacity. It’s not the answer to the crisis by any means, nor would it necessarily have prevented the Alexandria shooting. But it was intended to help gather a more comprehensive and enforceable National Instant Criminal Background Check database — you know, as the National Rifle Association’s Wayne LaPierre has repeatedly demanded.

The Republicans, including Steve Scalise and the other members of Congress who were shot at on Wednesday, voted in lockstep to repeal this rule. President Donald Trump signed it into law. Again, it might not have prevented James Hodgkinson from doing what he did. But what about next time?

It’s also never too soon to be reminded that Second Amendment purists believe that the “right to bear arms” was written into the Constitution to protect people against a despotic government. What they never tell us, however, is how exactly this works.

Last year a tweet from the account of presidential candidate Sen. Rand Paul quoted Fox News Channel’s Judge Andrew Napolitano who said during a joint appearance: “Why do we have a Second Amendment? It's not to shoot deer. It's to shoot at the government when it becomes tyrannical!”

Oh, really? Wasn’t that exactly what Hodgkinson was doing? As an apparent Sanders supporter — and judging by his presence on social media — it’s safe to say he wasn’t happy with the current government in Washington. Is that an excuse for what he did? Not to me, nor should it be anyone’s excuse, including Judge Napolitano and Sen. Paul. But it's fair to assume if asked outside the bubble of the Alexandria news cycle, the aforementioned Second Amendment purists will agree that, yes, using your God-given right to unlimited firearms ownership to strike back against perceived tyrants is acceptable.

It’s difficult to wade through a gun debate without more than a few radical gun hoarders popping into the fracas to warn us about protecting ourselves from would-be tyrants — just as Napolitano and Paul stupidly did last year. You might remember how the Kentucky senator filmed a campaign commercial in which he shoots the U.S. tax code with an AR-15 — the same kind of rifle used at Sandy Hook Elementary and, according to some witnesses, the same type used in Alexandria. What kind of message does this send — that firearms are acceptable tools for political change? Maybe. Is it inconceivable to someone who might have mental health issues that the shooting of political targets might be digested as a real-world solution?

Among many sensible, rational changes that are long overdue, this kind of frivolous gun usage and pandering to our worst instincts has to stop. We’re talking about for-profit retail products that already enjoy constitutional protections crafted during an era when there wasn’t a standing army or active police departments to protect and serve citizens. However we may continue to justify the language and meaning of the Second Amendment, Americans have long since abandoned any sort of reason when it comes to debating gun laws and how to best keep firearms out of the hands of people like James Hodgkinson who don’t know how to behave responsibly when granted open access to deadly weapons.

It’s crucial that instead of encouraging the use of firearms against perceived tyrants — my tyrant, after all, might be your hero — and constantly moving the goalposts in the debate, the Republican Party, including Rep. Scalise, return to the values of, at the very least, Ronald Reagan and James Brady, who supported modest regulations against the unrestricted purchase of handguns, assault rifles and the like. By the way, it’s germane to note regarding the moving of goalposts, that many or most Republicans — including the leaders of the NRA — once supported expanded background checks and the augmentation of the mental health database. Apparently, not anymore. Why? Because it makes too much sense, I suppose.

Nevertheless, my thoughts and positive vibes (I don’t pray) go out to the victims of the Alexandria shooting. And without apologies, many of my thoughts and positive vibes include yet another perhaps futile demand for a return to sensible talk when it comes to regulating consumer products that are manufactured, marketed and sold for the sole purpose of harming other living beings, be they animals, ordinary citizens or, once again, elected officials of our federal government. And it’s never too soon.