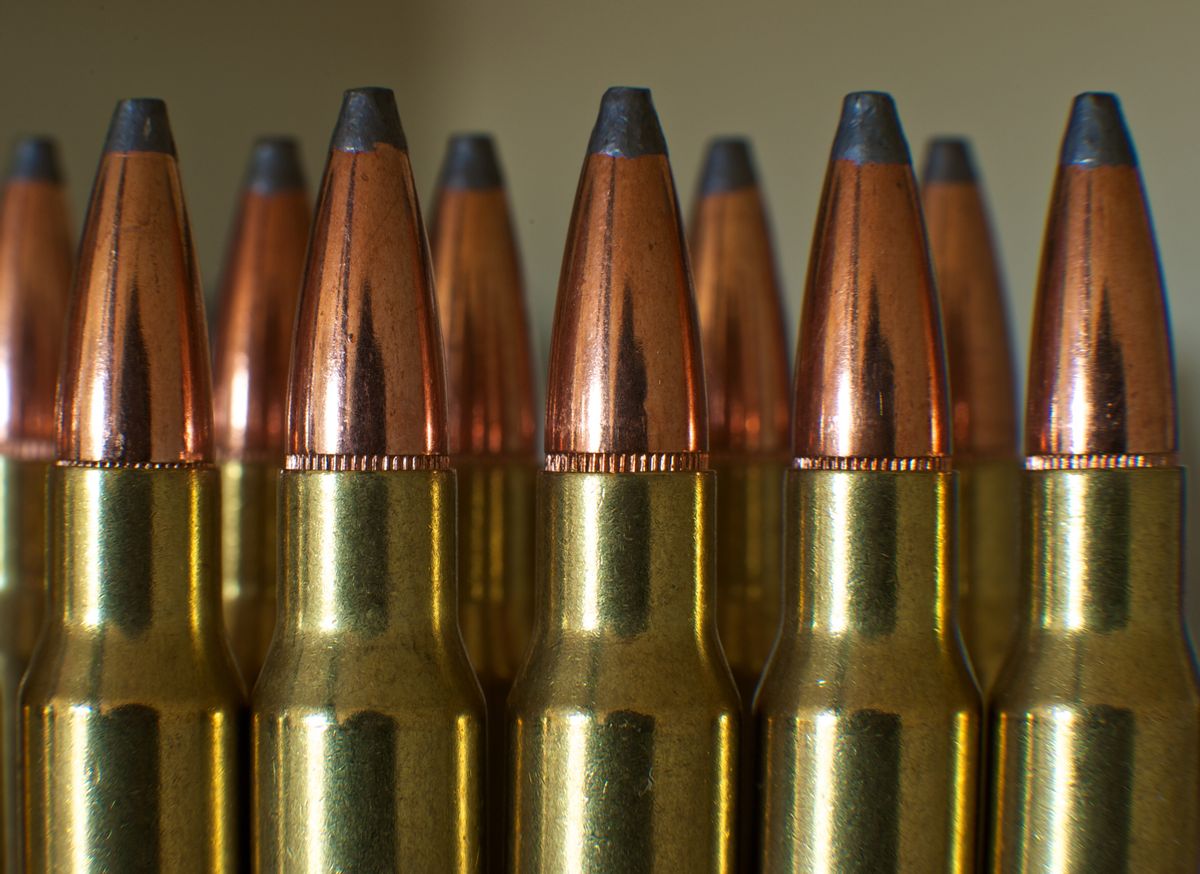 Seven people were killed in London on June 3, after three assailants used a vehicle to run into pedestrians on the London Bridge and then got out of the van to attack other victims with knives in nearby Borough Market. About 50 people were injured before police shot and killed all three suspects. Saturday’s attack came 12 days after a suicide attack at an Ariana Grande concert which left 22 dead, and a little over two months after a March attack in London that left four dead.

While NRATV program Stinchfield, which provides live news updates at the top of the hour from 9 a.m. EST to 1 p.m. EST, offered significant coverage of the London attack on June 5, the show ignored a mass shooting that took place that morning in Orlando, FL. (The Orlando incident was briefly mentioned on the NRA’s talk radio program, which airs later in the day.)

Covering the Orlando attack would have brought the nonsensical nature of the NRA’s arguments surrounding guns and terrorism into clear focus: The United States has much more permissive gun laws and availability compared to the U.K. and as a consequence experiences much higher rates of gun homicide and homicide generally.

While first reporting on the latest London attack during the June 5 9 a.m. edition of Stinchfield, host Grant Stinchfield said that just one armed police officer could have stopped the “carnage” and asked, “When is London going to wake up?” Stinchfield went on to fearmonger that it is “only a matter of time before these things start happening here on a regular basis” and blamed the attack on “politically correct politicians” before suggesting British citizens should carry guns to stop attacks. From the June 5 update:

GRANT STINCHFIELD (HOST): It took just eight minutes for three Islamic jihadists to kill seven people and wound nearly 50 more. Eight minutes. They didn’t use guns, but a truck and some knives. The reality of this attack is one police officer could have stopped this early on. What few people are talking about is that the attackers came upon the first officer just after exiting their van on the London Bridge, after running over so many unsuspecting Londoners. We have to assume the officer, like so many in England, was unarmed. The attacker stabbed him and then moved on to attack others. When is London going to wake up?

STINCHFIELD: It is only a matter of time before these things start happening here on a regular basis. We already see them happening in the United States. Now, since March, in London there have been three attacks and 34 people dead. In Europe the terrorists are winning. Submissive policies by submissive, politically correct politicians are getting people killed. How many times does America need to be warned? Does the world need to be warned these evil jihadists are for real? And they are brutal killers? As I watched Londoners flee in panic, I thought in that crowd of thousands, not one citizen had a chance. Not one citizen had a gun because the government bars them from having one. It took eight minutes for armed officers to arrive and save the day with a simple tool called a firearm. Eight minutes of carnage that could have been stopped if only that first officer was armed in the early seconds of that attack. [NRATV, Stinchfield, 6/5/17]

During the 11 a.m. update, Stinchfield again turned his attention to the citizens of England, who, he said, could not defend themselves “because the government disarmed them all.” He referred to this as “delusional” before slamming a British man as an “idiot” who was photographed “running away from the terror with a beer in his hand.” Stinchfield went on to claim that the British government has “made him this way” and “tricked” him into thinking he is safe, before rhetorically asking, “How sad is that?"

GRANT STINCHFIELD (HOST): For too long, left-wing leaders failed to realize that radical jihad is a real threat. Now in Europe, attacks are nearly a daily occurrence. With Saturday night’s attack in London, terrorists have killed 34 people in England since mid-March, and wounded countless more. All of this should serve as a global wake-up call. For Americans, these daily attacks are soon to come here. Are you ready? England was not. Look at the people fleeing. Not one could stop the attacker or defend themselves because the government disarmed them all. Now in the height of English delusion, England is hailing a probable drunk as its national hero. Look at the man running from the terror with a beer in his hand. The people of England thinks the terrorist won’t deter him. To me, anyone under attack who hangs on to a beer is simply an idiot, not a hero. But his government made him this way. They tricked him into thinking he is safe. So safe, the attack he is fleeing couldn’t really be real to him or a danger. My guess is, he looks at all of this as it’s simply some kind of office fire drill. How sad is that? How sad is that’s their hero, not the first police officer to come face-to-face with a terrorist just seconds into the attack. That police officer couldn’t be a hero, because he never stood a chance. He was unarmed. The jihadist stabbed him and moved on to attack so many others. For eight minutes they had their way until what? An armed unit showed up and killed them. [NRATV, Stinchfield, 6/5/17]

NRATV also took issue with London police’s suggested response to the attack. Police sent out a tweet on Saturday night advising people to “run,” “hide,” and “call” authorities in case of an attack. The strategy has previously been promoted by England’s National Police Chiefs Council, which said that during an attack, “people should first run to a place of safety,” or hide if they can’t, and call the police when it is safe to do so. (In the United States, the Department of Homeland Security recommends that in an active shooting situation, people first try to evacuate, then hide, and then confront the attacker as a last resort.)

During the June 5 1 p.m. update, NRATV commentator Bill Whittle called this strategy a “passive, weak kind of reaction” that only encourages the terrorists. During the June 5 10 a.m. update, Stinchfield said that “one armed citizen could have stopped the carnage early on” and that a better strategy for the people of England would be to “hide, fight, and fight,” before claiming, “Cowards always lose, sheep always get slaughtered. With the ever increasing threat we face, ... I refuse to become a coward or a sheep.”

Stinchfield doubled down on his stance in a June 5 tweet, saying his message to England is to “be a fighter!”

Beyond pushing more permissive guns laws, during the 9 a.m. update, Stinchfield said that the government in the United States should “surveil” mosques.

During all of NRATV’s June 5 Stinchfield updates, neither Stinchfield nor his guests brought up Monday’s attackin Orlando, which left five people including the gunman dead. NRATV host Cam Edwards mentioned the attack briefly during his three-hour show, but used it to push for more gun ownership.

UK actually has drastically lower rates of gun violence than US

Despite Stinchfield’s repeated claim that the U.K. was unprepared for the attack because the government has “disarmed” its people, the country actually has drastically lower rates of gun homicide and homicide generally compared to the U.S. The U.K. also has much more restrictive gun laws.

Firearms are used in more than two-thirds of homicides in the United States. High gun availability has been linked to increased gun homicide rates, with one review of academic research finding that “case-control studies, ecological time-series and cross-sectional studies indicate that in homes, cities, states and regions in the U.S., where there are more guns, both men and women are at a higher risk for homicide, particularly firearm homicide.” (The same trend is seen in comparisons between high-income countries.)

Academic research has also found that guns are used in the U.S. far more often to commit crimes than to stop crimes. A 2000 study by Harvard Injury Research Control Center found that as a ratio, "guns are used to threaten and intimidate far more often than they are used in self defense. Most self reported self defense gun uses may well be illegal and against the interests of society."

In fact, the odds of people needing a gun to protect themselves are so low that it’s difficult to accurately measure the total number of defensive gun uses each year. Meanwhile, gun violence is so frequent in the United States that more than 100,000 gunshot injuries are recorded every year (a figure that does not include crimes committed with guns where no one is shot).

In contrast to a lack of evidence that civilians can effectively use guns to stop mass shootings -- a frequent claim that the NRA makes -- terror attacks involving firearms in the United States, which often involve AR-15-style assault weapons, have been incredibly deadly over the years. A December 2015 terror attack in San Bernardino, CA, involved a gunman shooting and killing 14 and wounding 22 with an assault rifle at an office holiday party. The perpetrator of a June 2016 terror attack in a nightclub in Orlando, FL, also used an assault weapon to kill 49 people and wound at least 53.