The truth about Jeremy Corbyn staring us smack in the face: Socialism isn't bad 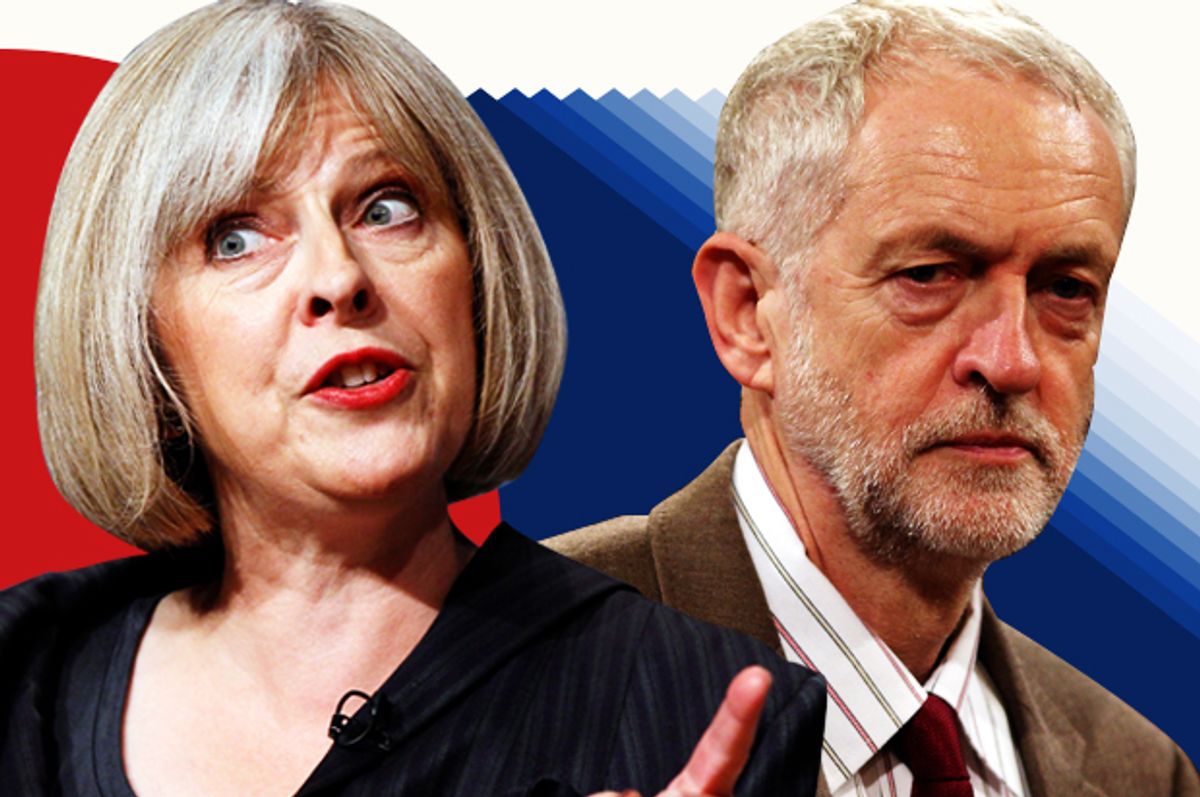 The signal couldn’t have been clearer if the entire British electorate had beamed it into the clouds Thursday night, standing with 13 million flashlights on hills and towers to project a blinding new sun over the Eastern Seaboard. No, Corbyn didn’t win the election outright, but nobody else did either. This was supposed to be a rout, the final destruction of left-wing electoralism, a tiny and barely formed thing crushed under Theresa May’s heels; instead, Labour has denied the Conservatives their majority, and destabilised the government to the extent that it might have to call another election within a few months, one which they’re well on course to win.

Corbyn has shown that while centrism and fascism gurgle mindlessly over a landscape flattened by low voter turnout and mass political apathy, it’s socialist politics that can drive the optimism and engagement needed to stop them. And if a left-wing platform can flourish here in Britain, a country toxified by decades of assault on the commons and centuries of racism, it can win anywhere — even in a country that elected Donald Trump.

Similarities between Corbyn and Sanders can be overplayed — yes, they’re both kindly white-haired socialists despised by their party apparatuses but immensely popular among younger voters, but Corbyn’s socialism is situated in a far deeper internationalist tradition, while also being considerably more inflected with recent theoretical developments than Bernie’s Cold War New Dealism. And while it’s still unfortunately important to keep relitigating the 2016 election, Corbyn’s triumph offers a blueprint for the future. It’s left the dominant myths of 21st-century politics crushed along with the Tory majority, namely that elections are won from the center.

For 20 years, Labour governments under Tony Blair and Gordon Brown pitched themselves to everyone and no one, jettisoning socialist dictums like public ownership and a general suspicion towards finance capital. The result was 20 years of steadily falling vote shares. In 2015, Ed Miliband abandoned his leftist leanings for more of the same, and he barely improved on the previous election.

This year, as the entire country appeared to have lurched sickeningly to the right, while newspaper columnists lauded a rabidly nationalistic Conservative party for occupying the new middle ground of British politics, as every numbers-obsessed party wonk urged Labour to drift rightwards with what appeared to be the national tide, Corbyn stood on an unashamedly radicalmanifesto. The newspapers, almost without exception, derided it as a fairy tale, bordering on Bolshevism. And it delivered a 9.6 percent shift towards Labour, a swing that outstripped Blair’s victory in 1997, the biggest increase in the party’s vote share since 1945.

It’s not just that centrism is unpopular; there’s simply no such thing. The center is a fiction, believed in only by politicians and the people who would like to become them; political science majors and the people who teach them; journalists and the people who imitate them. Nobody else has ever identified themselves with something as vapid and empty — an ideology of no ideology, the plan to keep everything the same, the residue of class power disguised as a doctrine. It’s the imaginary space between parties, a desert, a wasteland. For most people, the world doesn’t revolve around a happy stable core: it’s a nightmare, in which the rich want to fill their veins with the blood of the poor, in which the old promises of health and security are vanishing, in which everything has gone and continues to go monstrously wrong.

The Tories did not have a workable plan to actually improve things for the people of Britain. Instead, they demonised Corbyn personally. As the campaign whirred to a finish, a vast media campaign excoriated him for supposed links to the IRA, mostly based on meetings he held with the Irish Republican Sinn Fein party, and supposed sympathies for Hamas, Hezbollah, and Iran. After the brutal attacks in Manchester and London, the Daily Mail cynically tried to spin the horror into a campaign issue, devoting a full thirteen-page attack on a Labour party it claimed was led by a terrorist ideologue under foreign influence. It didn’t work. None of it really stuck. Nobody really cared.

This experience should haunt Democrats as they pursue a byzantine investigation into Trump’s alleged Russian ties. In a world that still hasn’t recovered from the 2008 crash, most voters simply do not care about geopolitical conspiracy theories; they want politics that will make a difference to their own lives. And the Democrats can’t offer that either: whatever its merits, the Russian probe offers a distraction from the fact that the mainstream offers no ideological alternative to Trumpism. After all, if Trump is impeached, the country is left with Mike Pence, and then after him a catalogue of further monstrosities, degenerating and without end. Even if the collusion narrative is true — and it’s become so vast and convoluted it seems unlikely to prove Trump's undoing—this is not the terrain on which modern conservatism should be fought. Political change doesn’t come out of Senate hearings; it comes from the people, and people are far more receptive to good progressive policies than they are to shrieking about treason.

The questions that the reactionary right offers itself as the answer to, it turns out, are actually far better solved by socialists. Trump's Republicans — as well as the Tories and UKIP — launch themselves happily into questions of identity and community. People, and older people especially, feel like they have ‘lost their country’ and want to get it back; they’re concerned by the disintegration of close-knit social ties, the anonymity and alienation that comes in the wake of a world surrendered entirely to market forces and lacerated by international free trade.

These are genuine and important concerns. The right’s solution, whether tacit or overt, is anti-immigrant hysteria and ethnic homogeneity: we can restore a mouldered social fabric just by making sure that nobody has to see any Muslims on the street. And there are people who will embrace this answer, if it’s the only one offered. But the better answer — that we can take a country back by wresting it away from private interests and into communal ownership; that we can restore communal ties by restoring the sphere of the commons — will always be more popular.

America is no exception. The Democratic Party still sees two distinct working classes: a core, ‘traditional’ working class that is white and intrinsically, helplessly racist, and a more peripheral working class, ethnically differentiated, its own kind of special interest. The only difference is that while British centrists desperately try to appease this imaginary proletariat with witless flag-waving and a constant tilt towards social exclusionism—is this racist enough for you? how about this? — American centrists tend to write it off altogether in favour of a minority coalition who, presumably, don’t need a roof over their heads or anything to feed their kids.

Corbyn’s success shows that none of this is necessary. Instead of a politics based on the triangulation of various evils — unfettered capitalism, institutional racism, endless war abroad, endless immiseration at home — something good is possible, and not just possible, but viable.

But it wouldn’t be right to talk about what the American left can learn from Corbynism without also thinking about what we in the UK can learn from the American left. The Outline has catalogued the immense enthusiasm among Americans for Corbyn; I’ve seen it first hand. Throughout election night I received a constant stream of congratulations from friends across the Atlantic; comrades I’d visited in New Orleans let me know that they’d crammed themselves into a bar to watch the BBC live stream. Others sent pictures of themselves in Corbyn T-shirts and badges.

Throughout the difficult two years of Corbyn’s leadership, plagued by petty in-fighting and the occasional terrifying doubts, every American leftist I knew was absolutely confident that he could pull it off. They could see something a lot of voters and commentators here, even those of us on the left, couldn’t. While British people contended with the heavy historical baggage of Labourism and the questions of the party’s future, Americans saw only a politician who had the chance to do something good. And they were right.