Who wears the pants? Claire Underwood, Hillary Clinton and the fiction of being a fashionable first lady

Kemal Harris, costume designer for Robin Wright on “House of Cards,” talks about the evolution of her iconic style 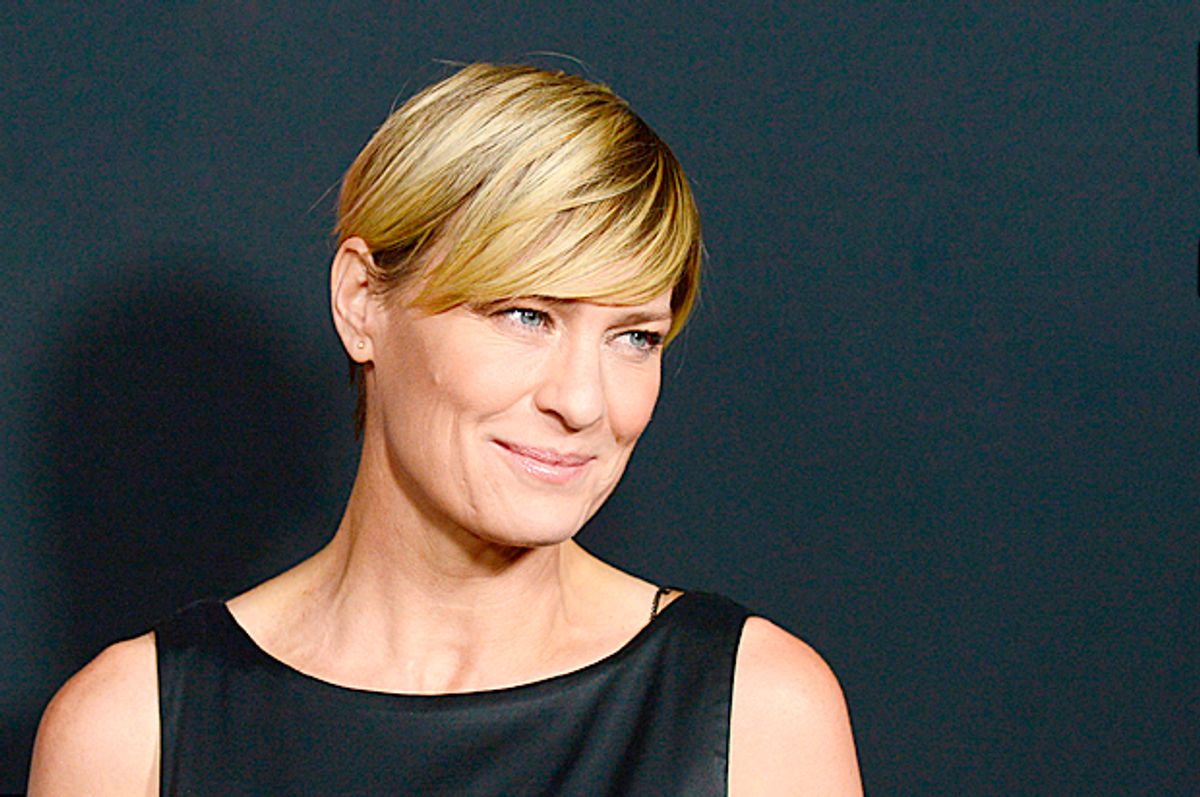 When Hillary Clinton joined Instagram in June of 2015, her first post was a rack of suit jackets in a hopeful array of cardinal red, bright white and cobalt blue. Given everything that has happened to the poor gal since, the caption, which read, “Hard choices,” conveys more than your ordinary sartorial dilemma. Instead, it trumpets something both patriotic and revolutionary though bottomless. Therein lies the rub: She forgot to put on her pants. By cutting herself off at the waist, Ms. Clinton confused (or delighted) a body politic still accustomed to the patriarchal synecdoche of skirts for girls. This costume fail basically kickstarted the trajectory from her choice to wear the pants to the colossus that became Pantsuit Nation. The only problem — okay, one of the problems — was that it didn’t work.

The question of how do you dress if you want to play the leader of the free world and you also happen to have genitals on the inside of your body is one that Kemal Harris happens to consider as often as Hillary Clinton does. (Note: some spoilers may follow.) The more Harris became known for designing Claire Underwood’s (Robin Wright) stunning wardrobe on “House of Cards,”the more often she was asked about Hillary Clinton’s signature costume. Though Harris was understandably baffled by the the fashion world’s obsession with Clinton’s pantsuits, asking Vanity Fair, “Can’t we just wear whatever we want,” what she may or may not have recognized with that question was that Clinton’s ensemble was more than a deliberate choice. It was as made up as Clinton herself. What’s more, at that point, Hillary Clinton might as well have been an adversary to Frank Underwood.

The revelation that 1993 also saw its first-ever woman in pants on the senate floor, Carol Moseley Braun — the first African-American woman elected to the Senate — also helped Harris to understand, if not the impetus behind this choice, then the bold statement it made for a female in a position of political power. As Claire’s character evolved, Harris reconsidered the pencil-skirts-and-dresses policy that she had honed to perfection in seasons 3 and 4. Enter the misunderstood, man-repelling trouser, only somewhat redux.

“We never did a full Hillary,” Harris admits. “To have success in a man’s world you don’t have to dress like a man. Claire will never fully lose the pencil skirt, but it was great to bring in a lot more trousers.”

Harris began designing Robin Wright’s costumes for “House of Cards” in season 3 — she favors Ralph Lauren, Michael Kors, Derek Lam, Altuzarra, Burberry, Armani and Equipment. (Who wouldn’t?) A third of the clothes she uses come courtesy of Barneys and Bergdorf’s; the others from the designers themselves. If Harris can’t find the exact look, she sketches, designs and custom-produces the jacket, blouse or suit herself, using a dressform with Wright’s exact dimensions that watches over Harris’s New York studio like a talisman. This mannequin is also used to tailor everything to Wright’s exact proportions, or to make subtle changes to the clothes, such as adding belts or buttons or shortening sleeves.

Since Harris had been working with Wright as her red-carpet stylist (she also styles Zosia Mamet, Kate McKinnon and Alexis Bledel), the move from combing some very high-end racks and thinking, “this is so Claire,” to being Claire Underwood’s sole designer was a no-brainer. As a New Yorker, Harris also understood David Fincher’s muted aesthetic — no bright light, no primary colors. She immediately caught on to the practical constraints of designing costumes versus the one-and-done of everyday styling, carefully reading scripts to familiarize herself with the storyline as well as the tone of a scene, or, famously, if Claire is going to be playing beer pong in an evening gown. (They borrowed three silver evening gowns from Ralph Lauren for the state dinner and subsequent beer pong scene in season 3).

“In season 3, Claire was the first lady, so she and Frank were the total power-hungry couple,” Harris tells me. “I hate to use the term arm candy, but she stepped into that role. I used a lot of forties-inspired apparel. Season 4 is a shedding of the skin. She reconnects with her mom and sheds tears for the first time ever. She wears tweed and boots. Also this was the first time I put her in pants. It was after her mom’s passing, which was meaningful because her mom was this Southern belle.”

The New York Times recently drew a comparison between Claire Underwood and Melania Trump, asserting that the latter drew some of her style cues from the first lady of Netflix. This assertion seems somewhat specious. At first glance, both wardrobes originate from the couture floor at Bergdorf’s, yet one is meant to convey power where the other is about publicly evolving toward propriety. It’s tantamount to comparing Michelle Obama to Jacqueline Kennedy Onassis. Okay, both Michelle and Jackie are prominent women married to young presidents and both wear clothes, but, let’s face it, the similarities end there. Jackie favored Dior, Givenchy and Chanel until the country got on her case for lavish spending and she hired Oleg Cassini. Meanwhile, Michelle Obama wore J. Crew cardigans, gave conservatives tsuris with her bare arms and put Canadian designer Jason Wu on the map. In other words, leave Melania out of this. She’s a mannequin.

The correlation between Claire and Hilz has more to do with calculated costumery and the opportune donning of the power pants. For Hillary it seemed to be about second-wave feminism and appearing sexless. She even wore pants to Bill’s inauguration. Though, so did Ivanka to her dad’s (Oscar de la Renta), so who knows? How does one intimidate yet still be accessible? Since we can’t exhume Eva Perón to ask her advice — we can only watch Madonna as Evita singing, “I came from the people, they need to adore me, so Christian Dior me from my head to my toes” — the next best thing is to hire an expert stylist who understands the importance of the ensemble as conveyor of character, AKA brand. Each look is honed for intense public scrutiny, including running gear. To lose this influence, even for a moment, is to drop character. To overdo it is death.

In season 5, Claire’s intent is bloody, bold and resolute. She might as well be the Cersei Lannister of Washington, minus the poopy shame walk. To convey this rapaciousness and single-pointed focus, Harris chose a lot of militaristic details, such as an array of buttons endlessly marching up the front of Wright’s toned, tight tummy like so many foot soldiers. The Harris-designed navy and light-blue dress with the buttons in episode 5 is an absolute show-stopper. The high crewneck suggests a don’t-fuck-with-me capability that also somehow manages to beckon. Harris also puts Claire in a fair amount of trousers, yet she pairs them with either a Ralph Lauren blouse or a Derek Lam turtleneck to lend the overall look a more feminine feel. Unlike what Kate McKinnon called Hillary’s “hard, tan business shoe” on SNL, Claire’s Christian Louboutin, Manolo Blahnik and Christian Dior heels are still impossibly high.

What’s more, there’s something about Robin Wright’s figure and expressionless face that’s disarming. Her whole mien feels more unattainable than the $51,500 Dolce & Gabbana jacket Melania wore in Sicily. In contrast, Hilary looks like a schlepper, but maybe that’s the point. Unlike Nancy Reagan’s red Adolfo suit or Jackie Kennedy’s infamous pink Chanel suit, or Kellyanne Conway’s red-white-and-blue showstopper, Hillary’s pantsuits were supposed to be the ultimate accoutrement for the nation’s hard-hitting grandma, a part she has been playing since her glory days at Wellesley.

“Claire Underwood is aspirational,” Harris says. “A huge part of her identity is untouchable. It’s used to intimidate and disarm and it’s very effective, but she’s also a fictional character. She has a full staff that’s tailoring and dry cleaning her clothes. You can’t run around the city in those heels!”

Of course, Claire Underwood never wears a pantsuit in which the jacket and trousers match. They tried for a hot minute but it didn’t work. While Claire’s seduction beguiles, Hillary’s hits you over the head with all the subtlety of a cast-iron skillet. The semiotics are at once obvious while the message is mixed: Whatever mishegas went on in that there Oval, Hillary sat in the residence like Penelope, weaving her skirts into pants as she waited for the exact moment to slap those suckers on and clomp her way into the presidency. Meanwhile, Claire Underwood’s elegantly tailored slacks portend dark victory. Both women are fictional characters in costumes; only one fiction continues to work.