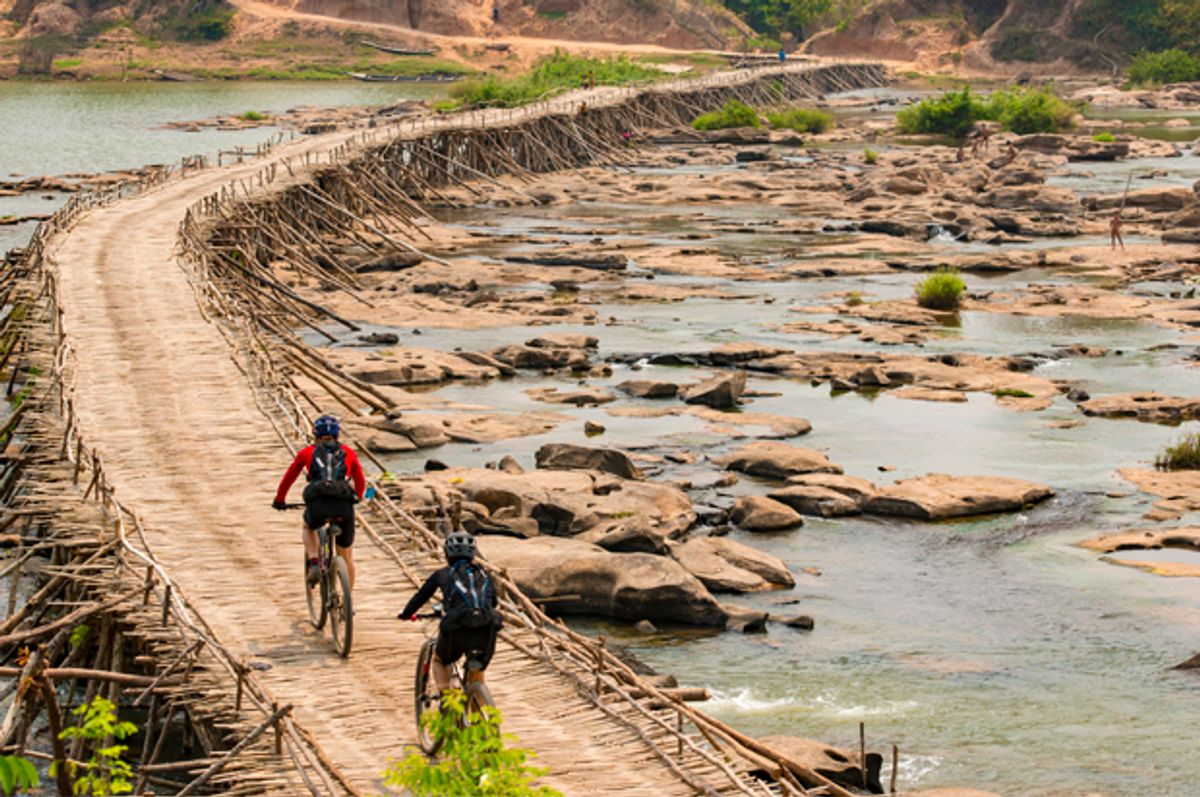 Watching or playing sports is usually a time when we can turn off our politically engaged (and anxious) minds to enjoy a sweet nine innings or an alley-oop, without a care for the world off the field or the court. But it would be foolish to suggest athletics don’t get political. Ask any Cuban baseball player, for that matter, or Colin Kaepernick.

The good news is that sports can often be an arena where connections are made between nations and people. That’s certainly what happened on Vietnam’s Ho Chi Minh Trail, when ultra-endurance mountain bike athlete Rebecca Rusch endeavored to retrace the trail with an emotional stop at the location where her American pilot father, who was shot down when she was three years old, died during the Vietnam War.

In the new documentary “Blood Road,” director Nicholas Schrunk follows Rusch’s personal quest for closure. The film begins rolling out into theaters this weekend and will be available online June 20. On the eve of Father’s Day, it made sense to ask Schrunk some questions about the film, which demonstrates that sport can build bridges between nations as well as a daughter and her long-deceased dad.

How did the film get started? Did Rebecca approach producer Red Bull Media House with the idea?

The genesis of the project started back in 2003 when Rebecca was racing in Vietnam. For an athlete, physically being in a place is a powerful thing, and having Laos — the location of the crash site — being just over the mountains to the west planted a seed for the expedition. Over the next 12 years this sat with her until she approached Red Bull Media House with the log line of the film. I remember hearing it for the first time via our executive producer: “I want to ride the entire length of the Ho Chi Minh Trail to find the crash site where my father, a fighter pilot in the Vietnam War, was shot down more than 40 years ago.” That idea was the basis that motivated our team to start developing the idea, and together with Rebecca we started the long process of putting the logistics team and creative together to tell the story.

How would you describe the current relationship between the U.S. and Vietnam? How were Vietnam, Cambodia and Laos as hosts to your production?

This production very heavily relied on field teams in all three countries for production support, but more specifically for Rebecca and her story. You travel to a place and you’re totally in their world and on their terms; this isn’t something we had hesitations about, but certainly we all expected some amount of resistance to Americans being there, regardless of how clearly we communicated our goal and story. What we found was not only a wonderful community of professionals on the production side, but a warm and empathetic group of locals who welcomed Rebecca and her team. You travel to the other side of the world to a group of people who owe us nothing and yet they helped in every possible way. I spent over six months in Southeast Asia between scouting, documenting, production and, in my experience, the mood of the current relationship between the two countries is remarkable, especially in Laos. In fact, I don’t think I’ve ever traveled anywhere with such an open group of people who had a strong, genuine interest in helping Rebecca.

The symbolism of a Vietnamese woman [former professional athlete Nguyen Huyen, who joins Rusch] and the daughter of a deceased American soldier traveling the Ho Chi Minh trail is pretty heavy. How would you say Rebecca and Huyen's experience on the trail represents an evolution since the war?

One of the most important creative aspects was to show the experience (with the war being part of it) through the eyes of both an American and a Vietnamese citizen. Huyen (Rebecca’s Vietnamese teammate) was phenomenal in empathizing with Rebecca and her story, and as a coach and mother herself she was equipped emotionally to handle this very heavy and difficult journey with Rebecca and support her as such.

While the Ho Chi Minh trail runs through the three countries, it primarily resides in Laos, which was a sovereign country during the war, used by the North Vietnamese, and of course bombed by the Americans in an effort to stop the flow of supplies down the trail. Having much of our story based outside of Vietnam, in a country that wasn’t officially involved in the war, but had a major conflict between the Americans and Vietnamese, offered fascinating perspective and dialog between both of them as they saw the effects of the war on both sides. I feel that Huyen’s journey with Rebecca represents an evolution of attitudes since the Vietnam War. In my experience, both Vietnamese and Americans want to heal any wounds that remain.

During the Reagan years, the MIA/POW movement was used to galvanize support for the Republican Party. Did you feel like you had to navigate that baggage?

In the Reagan years, it could be summarized that he encouraged the POW/MIA political agenda that led some families of MIA soldiers to not have to accept the loss of their loved ones. But for Rebecca and our project I don’t see this as the case. Regardless of what placebo politics were being talked about, Rebecca’s desire to learn more and travel to the crash site redirected and put her back in control of her own personal narrative.

For myself, I approach every documentary project with an open mind and heart, and while there are certainly aspects of the war present it wasn’t my intention of ever getting caught up on America’s botched political agenda. This was Rebecca’s journey and I only wanted to get into what was relevant to that. One of the most revealing aspects of the film was Stephen Rusch’s [Rebecca’s father] letters back home to his family. In them he expresses his hesitations with the war and questions why they were there and how he can’t see “any reason why.” This is the story I wanted to tell, not of any macro movements of our countries and not to make a political statement, but to relate it back to Rebecca’s journey and to show how one man and his thoughts could be relatable to an audience trying to project themselves into that time, in that position and make up their own minds.

What would you say are other good examples of where sport has helped to defuse or reconcile political differences?

To me, Rebecca’s ride was more about healing two cultures together, with family being the common thread, but certainly the parallels exist with sport. Most recently, in my mind, the India versus Pakistan Cricket World Cup (2011) is a great example. With all the tensions in the region, the two national teams hadn’t faced each other since the 2008 terrorist attacks in Mumbai that left 164 civilians and security personnel dead. When the teams faced off, businesses closed for a day for people to watch and both prime ministers publicly watched together. No one single act will ever resolve a nation's differences. However, I believe sports are a universal language across all people, and sometimes a simple gesture can make a significant impact and become relatable, transcending differences.

Father's Day is coming up and this is very much a story about a daughter who lost her father. How did Rebecca's journey impact your own ideas about fatherhood?

Our fathers serve many purposes. They’re caretakers, disciplinarians, part of our social development and are a strong inner core resource. In the case of Rebecca, she was really seeking a part of her self-identity and also his leadership. In my personal relationship with my father I see the functional aspects he offers, but with Rebecca I saw the more nuanced roles, and almost an appetite for guidance. At the end of the film she felt that he was still guiding her, bringing her to the crash site, motivated to get there by the very character traits that he possessed and passed on to her. She was craving that guidance and found it. What was originally thought of as “finding closure” with her father was revealed as her need to open up to know more.

At the end of the film, Rebecca's final words about "forgiveness" are potentially open to interpretation. Do you think she's asking the Vietnamese for forgiveness?

The idea of forgiveness at the end of the film is multifaceted, but to me it means letting go of the negatives of dwelling in the past and instead choosing to heal. Forgiving isn’t the same as forgetting; it isn’t some divine form of amnesia, but forgiveness can be a way to strengthen and set the example for others whether that be countries, communities or other people in our lives.