Get us out from under. . ."Wynonna Earp"? That's right

"Wonder Woman" may rule theaters, but TV viewers can take heart in the spirited adventures of Syfy's gunslinger 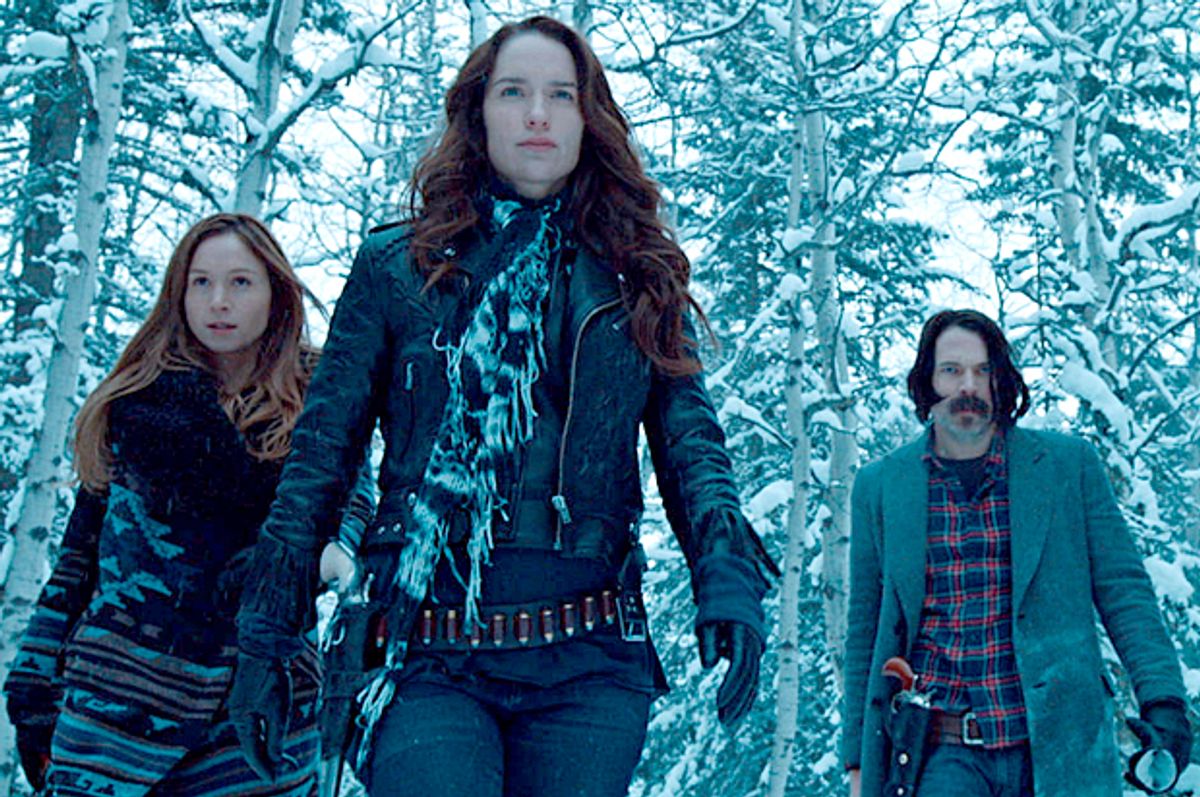 Scanning the television schedule in the wake of seeing "Wonder Woman" might leave a person bereft. Few female characters resemble Diana of Themyscira in the first place; her physical and moral strength are without parallel, and unlike superheroes featured on other TV series, the Diana seen in Patty Jenkins' film is confident and never doubts her right to assert herself.

Don't forget that while Diana of Themyscira is a paragon of female strength, she is also a demigod. She can fly and toss around tanks. She's strong, man. She can kick! The women of this world are mighty too, of course, but society loves to remind us of our limitations. Women are assaulted at every turn by denigrating messages about our physical and intellectual worth that, unfortunately, we internalize and inflict upon each other. Wouldn’t it be tremendous to have a “Wonder Woman” series on TV right now? Sadly, we don't. But we do have “Wynonna Earp.”

The second season of “Wynonna Earp” is currently airing Fridays at 10 p.m. on Syfy. And if you let season 1 pass you by, that’s forgivable. “Wynonna Earp” came on the scene last year as a part of the cable channel’s efforts to reclaim the reputation it enjoyed in years past thanks to the critical adulation slathered upon series such as “Battlestar Galactica” and to a lesser extent before it, “Farscape.”

After “Battlestar,” Syfy's popularity as a go-to channel waned, although it tapped into a weird sort of currency with B-movie titles such as “Piranhaconda” and “Mega Python vs. Gatoroid” and the ever-more-pointless “Sharknado” films (that is said in the full awareness that the series barely had a  point to begin with).

This is a very long way of saying that Syfy probably did no favors to “Wynonna Earp” by salting the path ahead of the titular heroine with the likes of “Frankenfish” and “Mongolian Death Worm.” But this modern Western proved its mettle by dint of unexpectedly weird plotting and witty dialogue, becoming a word-of-mouth phenomenon among genre addicts.

To its everlasting credit, "Wynonna Earp" also happens to be easy to pick up if you haven’t seen the first season, which is an increasingly rare and underappreciated quality in series these days, and certainly welcome on Friday nights. (That said, do not deny yourself the pleasure of watching season 1.)

The basic outline for the uninitiated viewer is this: Wynonna Earp, played by Melanie Scrofano, resides in the town of Purgatory, a place where her family has lived for several generations. The Earps are not a beloved clan in Purgatory due to their habit of attracting Revenants, outlaws gunned down by their ancestor Wyatt Earp and resurrected by a curse.

Scrofano lends a hardened and slightly feral swagger to Wynonna that’s vastly entertaining, particularly in the scenes where she allows Wynonna to match the overwhelming resentment Purgatory's denizens spew in her direction with an equally powerful attitude of having zero Fs to give. Wynonna drinks as much as she wants, screws whomever she wants, and simply does not care what anyone thinks. Being a pariah can be its own superpower.

But Wynonna is Wyatt Earp’s heir and the only person who can wield Peacemaker, a supernatural pistol that sends demons to their final resting place. If you’re saying to yourself, “that sounds a lot like a certain vampire slayer,” why yes. “Wynonna Earp” and the Whedonesque traits displayed by its heroine are intentional.

Showrunner Emily Andras played with the “Buffy” archetype somewhat in a previous adventure hour, the Canadian import “Lost Girl” (“Wynonna Earp” also originated as a comic book series). But plainly Purgatory has characteristics that are downright Hellmouthy. Wynonna has a team around her that includes an immortal Doc Holliday (Tim Rozon) and a geeky sister named Waverly (Dominique Provost-Chalkley), who is in love with a deputy from Purgatory’s sheriff’s office named Nicole (Katherine Barrell).

Wynonna and the crew currently answer to a special law enforcement division called Black Badge that paired her up with a U.S. Marshal named Xavier Dolls (Shamier Anderson); when the agency turned on him Wynonna broke him out and forced him to head out on the lam. In this place they’ve brought in a scientist named Jeremy (Varun Saranga).

Beyond that, all a person needs to do is settle in to enjoy a breezy hour of Earp-on-monster violence and a developing subplot that threatens the life — and the very soul — of someone Wynonna holds dear.

Much of the show’s winning spirit rests in its exploration of family loyalty and the popular conviction that one’s blood and dynastic ties compel one to fulfill a prescribed destiny. And that’s a theme the series shares somewhat with “Wonder Woman,” although where Diana fervidly embraces her destiny, Wynonna accepts her quest with a lot less enthusiasm.

On the other hand, Wynonna fights demons because she’s good at it, and because the challenge thrills her. And the story of “Wynonna Earp” conveys the sense that when these battles are through, she’ll be delighted to hang up Peacemaker and journey off into the sunset to enjoy a life free of anxiety over when the next attack will come and which form it will take. That’s a dream I’m guessing a lot of us can relate to.