Sorry, centrist liberals, the politics of Bernie Sanders and Jeremy Corbyn are the progressive path forward 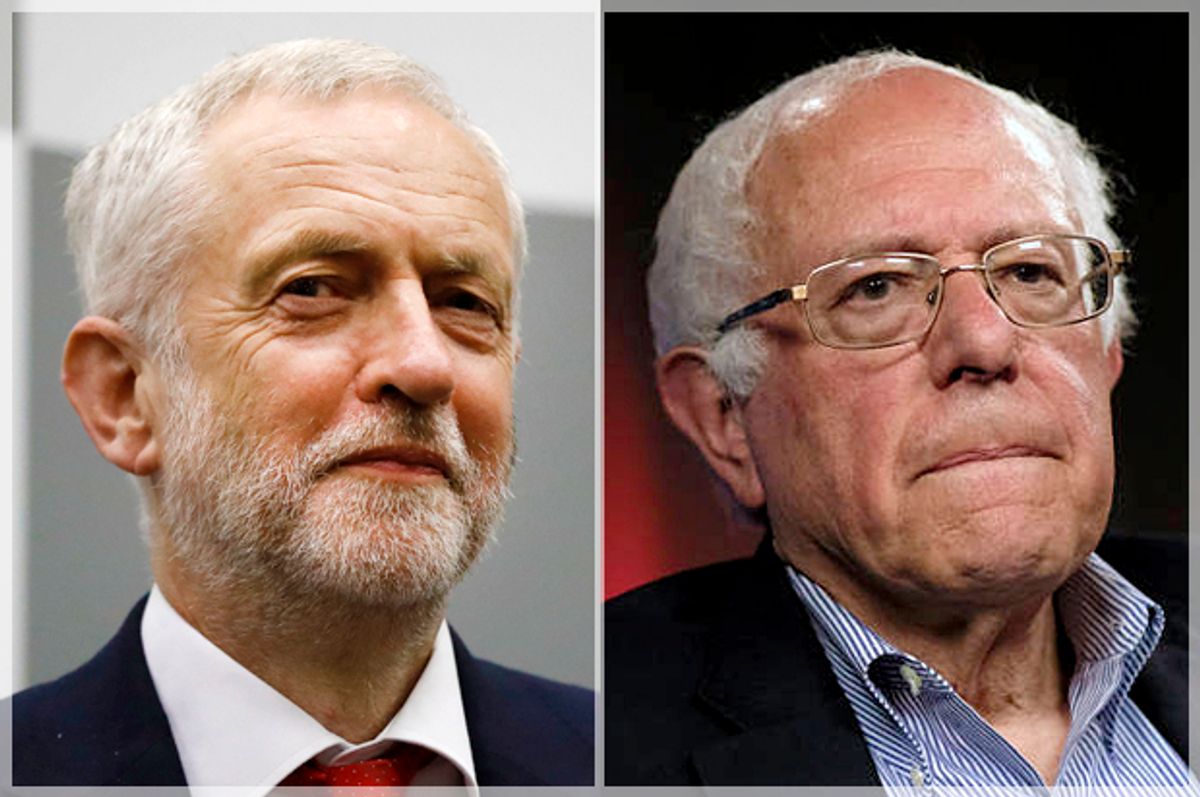 It has been over a week since the U.K. election that left the political establishment reeling in Britain and around the world. And though Prime Minister Theresa May will remain in office — for now — Jeremy Corbyn was correct when he said last week that the election had “changed the face of British politics.”

The snap election that was supposed to have crushed Corbyn — and the Labour Party — once and for all has instead re-energized the British left, while throwing serious doubt on the Conservative Party’s future. When Theresa May arrogantly called the election in April, polls indicated that her Conservative Party would win by a historic landslide, and the British press — which has been fiercely against Corbyn since he was elected as leader of the Labour Party two years ago — ran giddy headlines predicting the death of his party. There was no doubt whether May and the Tories would win a majority; it was only a matter of how massive that majority would be.

But if we have learned anything over the past year, with the election of U.S. President Donald Trump and the “Brexit" referendum result last summer, it is that absolutely nothing is certain in this populist age. May was expected to “Crush the Saboteurs,” as the Daily Mail’s front page read after her announcement in April, but instead she ended up crushing her own party, which lost its majority in the House of Commons after leading by more than 20 points just a month earlier.

Meanwhile, the unconventional and “unelectable” Corbyn, who has been smeared and misrepresented by the British media for the past two years — and who has faced repeated mutinies within his own party — generated the highest turnout for a U.K. election since 1997 and won a larger share of the popular vote than Tony Blair did in 2005. It was an even bigger upset than last year’s Brexit shocker.

Even Labour Party members and Corbynites had been resigned to the Tories winning back their majority; their goal had been simply to keep that majority as slim as possible and to not be completely humiliated. But Theresa May was the only one humiliated on election day, while the leftist Labour leader was clearly vindicated after years of abuse.

And Corbyn’s political success will be felt far beyond the shores of Great Britain. For weeks and months to come pundits and political strategists will continue to ask themselves how this happened, and many will no doubt try to spin and distort what happened last week. But the answer is simple: The old-school socialist triumphed because he ran an effective grassroots campaign with a compelling message that offered principled leadership and a progressive platform to galvanize the working-class and young people of Britain. Though Labour clearly benefited from May’s poorly run campaign, there is little doubt that Labour’s progressive manifesto was essential to its parliamentary gains.

Before the election, Corbyn’s approval ratings were in the gutter after years of his being maligned by the British press. An analysis of 2016 by The Independent found that more than 75 percent of press coverage had misrepresented Corbyn (and his views), while more than half of the (purportedly neutral) news articles were “critical or antagonistic in tone, compared to two thirds of all editorials and opinion pieces.”

By contrast, the British public was broadly supportive of Corbyn’s actual policies. According to a poll by The Independent, along with a May survey by ComRes for the Daily Mirror, the major policies featured in Labour’s general election manifesto earned strong support from the British public, while the right-wing Tory manifesto was widely rejected. It is not surprising then that the candidates’ approval ratings changed places during the election, as their policies were publicized. According to the latest polling by YouGov, May’s approval ratings have plummeted to Corbyn’s pre-election levels, while the Labour leader’s ratings have surged.

It is already quite clear how last week’s election has changed politics in the U.K., but its outcome has also been felt across the Atlantic.

Much has already been said about the obvious parallels between Corbyn’s Labour Party success and the rise of Sen. Bernie Sanders in the U.S. and what the British election means for American politics. Like Jeremy Corbyn, Bernie Sanders was seen by the commentariat as a fringe socialist kook who was completely unelectable — and like Corbyn, he created a mass movement that appealed to working people and young voters in particular. Sanders was by far the most popular candidate among millennials in the 2016 election, while Corbyn’s Labour Party won 63 percent of aged 18 to 34 and increased voter turnout for 18- to 25-year-olds from 45 percent in 2015 to about  72 percent last week, according to exit polls from Sky data. Similar to the scenario in the U.K., the majority of Americans tend to support Sanders’ social democratic policies, including his support for Medicare for all and raising taxes on the rich.

Of course, there’s at least one obvious difference between the two progressive politicians: While Corbyn has been personally unpopular in his country, Sanders continues to rank as the most popular politician in the United States. Moreover, Sanders consistently outperformed Hillary Clinton in the polls against Donald Trump last year and would have likely defeated the Republican billionaire handily — barring a major spoiler candidate like Michael Bloomberg.

This reality continues to infuriate many establishment Democrats, who have inevitably tried to dismiss and downplay Corbyn’s success in Britain, noting that Labour still didn’t win a majority of its own. If a centrist Blairite were leading the party, they insist (with no empirical basis whatsoever), then he or she would have been elected prime minister, say centrist Democrats. The same people who were gloating about Labour’s anticipated ruin just a month ago — and using it as evidence that a populist shift to the left would be disastrous for the Democratic Party — are now spinning Labour’s historic accomplishment to fit their narrative. Clearly there is a lot of denial going on here. The Blairites and Clintonites cannot bring themselves to admit that “third way” centrism is a relic of the neoliberal 1990s. They refuse to see the writing on the wall, even as it stares at them directly.

In a column for The New York Times on Tuesday, Sen. Sanders wrote that the British election “should be a lesson for the Democratic Party” to stop clinging to an “overly cautious, centrist ideology.”

He wrote, “There is never one reason elections are won or lost,” adding, “but there is widespread agreement that momentum shifted to Labour after it released a very progressive manifesto that generated much enthusiasm among young people and workers. . . . The  [Democratic] party’s main thrust must be to make politics relevant to those who have given up on democracy and bring millions of new voters into the political process.”

A few days earlier at the People’s Summit in Chicago, Sanders discussed the U.K. election during aspeech, noting that Labour “won those seats not by moving to the right” but by “standing up to the ruling class of the U.K.” He also reiterated that “Trump didn't win the election, the Democratic Party lost the election.” It seems clear that if the Democratic Party wants to start winning elections again, it should pay careful attention to what is currently happening in Britain.