The sadism, compassion and sheer liberated joy of "Like a Rolling Stone" 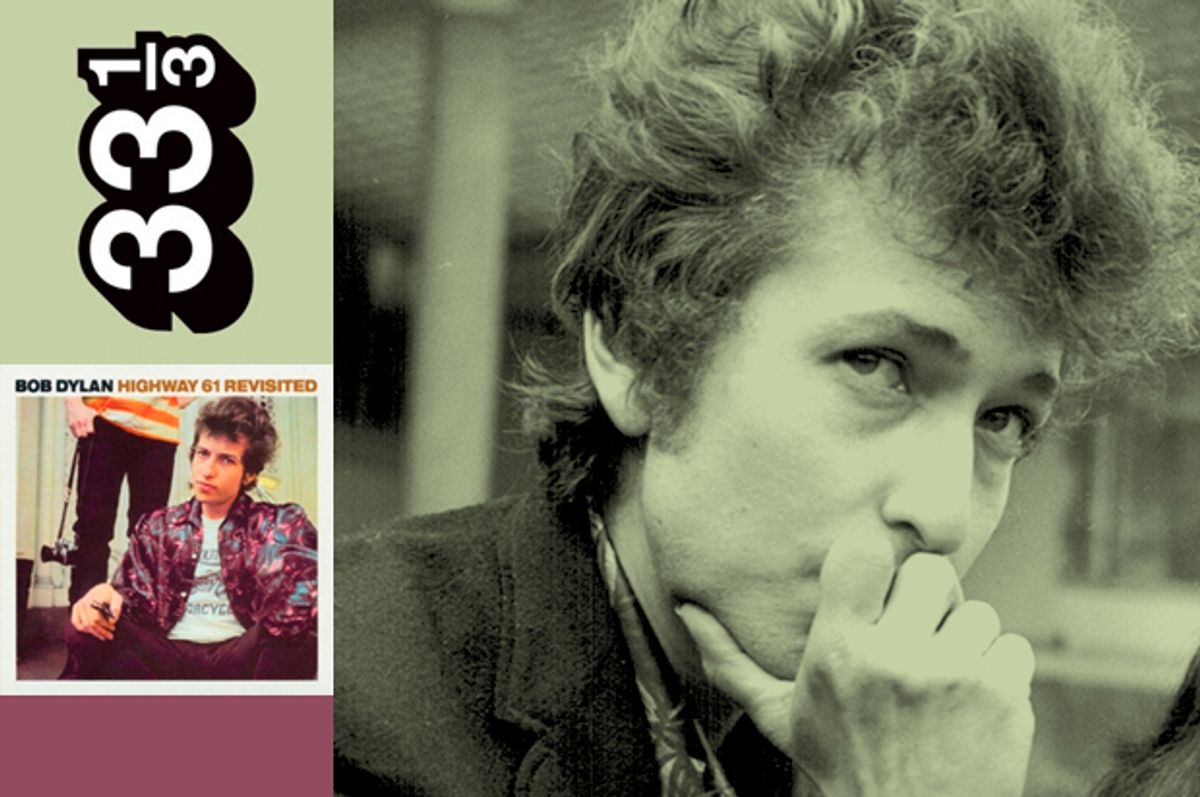 It has to be the most celebrated drumbeat in all of popular music. Often described in ballistic terms—a “rifle shot,” a “gunshot”—Bobby Gregg’s inaugural smack is indeed the shot heard ’round the world. “I was in the car with my mother listening to WMCA,” Bruce Springsteen recalled twenty-four years after the fact, “and on came that snare shot that sounded like somebody’d kicked open the door to your mind.” Greil Marcus, in his penetrating if overwrought study of “Like a Rolling Stone,” contends that while many other songs use the same kick-off—including the Beatles’ “Any Time at All” from the previous year and Dylan’s own “From a Buick 6” further down Highway 61—“on no other record does the sound, or the act, so call attention to itself, as an absolute announcement that something new has begun.” This might be overstating the case somewhat: as Al Kooper reminded Marcus, it’s very common for the drummer to end a one-two-three-four count with a sharp thwack. Still, there is something about this particular beat that makes it more than simple timekeeping, that renders it more memorable. Somehow, a common device has turned itself into a signature. If you heard only this one second of “Like a Rolling Stone,” you could still identify the song.

This drumbeat has become so associated with the song, in fact, that its presence or absence directly inflects upon the character of the performance. “Like a Rolling Stone” was the invariable closer of Dylan’s 1966 world tour. One can almost gauge the degree of exasperation he felt on any given night over the catcalls that greeted his electric set by the emphasis that drummer Mickey Jones placed on his opening salvo. It echoes authoritatively in Edinburgh. It booms with smashing finality in the valedictory concert at Albert Hall, following a drawling introduction in which Dylan dedicates the song to “the Taj Mahawwwl.” And it positively deafens with scorn following the legendary “Judas!—You’re a LIAR” exchange between Dylan and disgruntled fan Keith Butler at the Manchester Free Trade Hall ten days earlier, which triggered Dylan’s exhortation to the band to “play fuckin’ loud.” Its absence in favor of a cranking instrumental build-up, in the version played at the Isle of Wight in 1969, was one of the reasons for that performance often being tagged as lifeless. (Oddly, the version played at the infamous Newport concert, only weeks after the studio version was recorded and with many of the same musicians, also foregoes the opening bang: it made enough of a statement as it was.) Among the many, many covers of the song, one by the band Drive-By Truckers is notable in that it begins with a similar drum shot, which then rests for a few bars, imbuing their entire rendition with a kind of we-know-you-know slyness.

In fact, the famous drumbeat is actually two beats, the resounding snap of the snare followed by the almost subliminally faint echo of a kick-drum, which makes the whole thing take a half-step back and gives it an extra push of forward momentum: not ONE-(pause)-TWO, but ONE-two-THREE. Marcus, again, tends to oversell when he likens “the empty split-second that follows” the initial beat (but that’s just it: it’s not empty) to both “a house tumbling over a cliff ” and the Oklahoma Land Rush. What he’s missing in his own rush to hyperbole is the way that half-heard second beat pulls in, eases in, the onslaught of guitar, piano, organ, bass, and drum that henceforth sends the song—and the album it starts off with a literal bang—charging forward.

“Like a Rolling Stone” is also no doubt the most famous song ever written out of sheer boredom. Dylan had spent April and May 1965 in England, for what would be his last fully acoustic tour. Both the performances and the time surrounding them, captured in D. A. Pennebaker’s documentary Dont Look Back (the title’s lack of apostrophe mirroring Dylan’s idiosyncratic approach to punctuation), show a man barely going through the motions. Dylan is in control of his material and his audience, but there is no spontaneity and little verve. Even supposedly off-the-cuff remarks (“This one is called ‘It’s Alright, Ma, I’m Only Bleeding’—ho ho ho” [audience laughs]) have been rehearsed many times before. By the time he returned to the States at the beginning of June, he was considering giving up performing altogether. “I was very drained,” he explained [in a Playboy interview] several months later. “I was playing a lot of songs I didn’t want to play. I was singing words I didn’t really want to sing.… It’s very tiring having other people tell you how much they dig you if you yourself don’t dig you.”

What changed his mind, he said, was the new musical vista opened by “Rolling Stone.” “I’d literally quit singing and playing,” he told Martin Bronstein of the Canadian Broadcasting Corporation, “and I found myself writing this song, this story, this long piece of vomit about twenty pages long, and out of it I took ‘Like a Rolling Stone’ and made it as a single. And I’d never written anything like that before.” As he described it to Jules Siegel, the “vomit” began as simple prose ramblings: “It wasn’t called anything, just a rhythm thing on paper… I had never thought of it as a song, until one day I was at the piano, and on the paper it was singing, ‘How does it feel?’ in a slow motion pace, in the utmost of slow motion following something.”

Dylan’s interviews are notoriously unreliable sources of information, more like theatrical performances than communication sessions, and perhaps none more so than the ones he gave around the release of Highway 61. But what emerges consistently from his remarks about “Rolling Stone,” in addition to his pleasure at having written it—“the best song I wrote,” he told Gleason—is the sense of spontaneity regained, of an elusive but thrilling encounter with the muse. “It’s like a ghost is writing a song like that,” he recalled in 2004, with a note of wistfulness as if speaking of a long time gone. “It gives you the song and it goes away, it goes away. You don’t know what it means. Except the ghost picked me to write the song.” To television commentator Ed Bradley that same year, he described the songs of this period as having come from “a place of magic.”

In this case, the magic seems to have been triggered precisely by the creative stagnation Dylan had been feeling (and that his records had been showing) over the previous two years. The Times They Are A-Changin’ is well-crafted but resolutely downbeat, more like medicine than entertainment, while Another Side, despite a few stand-outs, just sounds bored. Little wonder that by the time Dylan returned from his all-acoustic British tour, he’d decided to give it all up—or that the inspiration of “Rolling Stone” seemed such a godsend. It ushered in a creative outpouring that is almost unrivaled in Dylan’s career (let alone anyone else’s), and that over the following half-year resulted in many of the songs on which his reputation still stands.

Also rare for a chart-topping pop hit, the lyrics focused not on love but its opposite. It was “all about my steady hatred directed at some point that was honest,” Dylan told Siegel, immediately amending that to: “In the end it wasn’t hatred, it was telling someone something they didn’t know, telling them they were lucky. Revenge, that’s a better word… It was like swimming in lava. In your eyesight, you see your victim swimming in lava. Hanging by their arms from a birch tree.” Lucky in lava is not the same as lucky in love, but the contradiction is very much in keeping with the spirit of “Like a Rolling Stone,” a song that manages to balance sadism, compassion, and sheer liberated joy in a six-minute display of pure bravado.