It’s official: Republicans have become an all-or-nothing party committed to going down with Trump’s ship 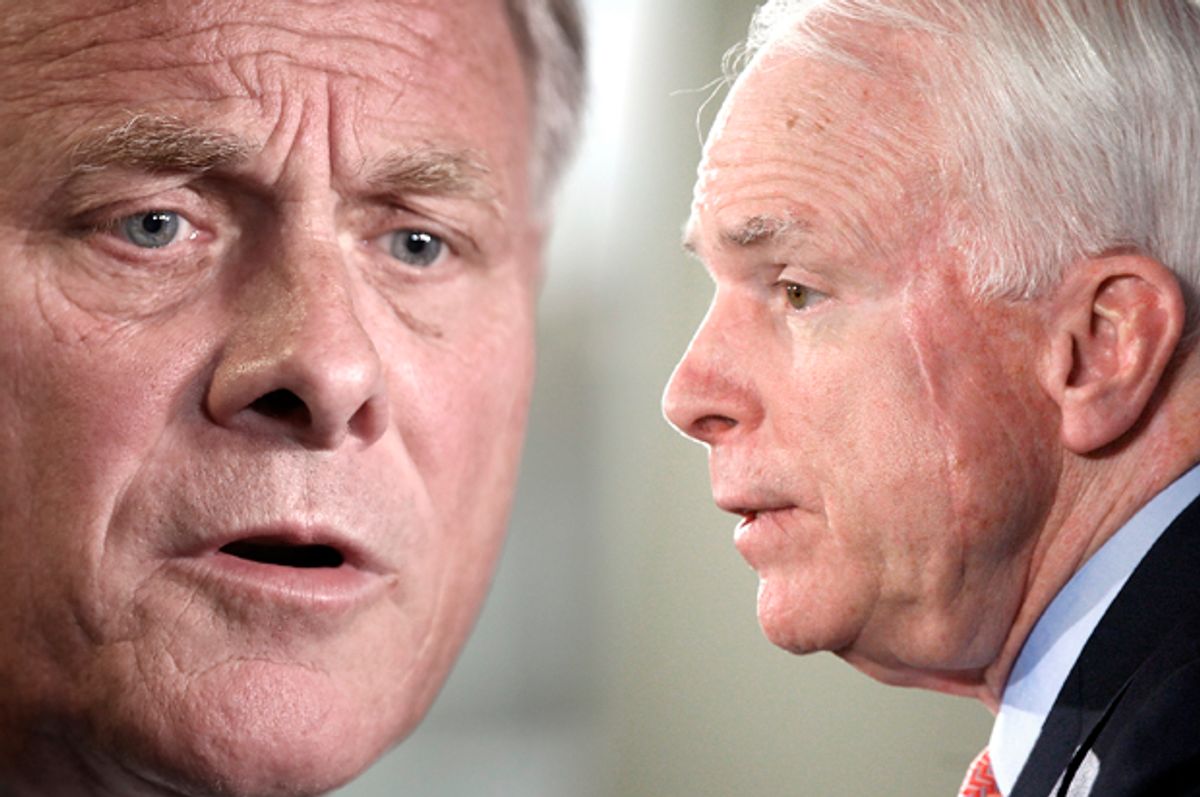 Republicans have gotten away with pretense after pretense for decades, hiding behind one phony construct after another. They pin little American flags to their suit lapels, hiding behind patriotism. Thrice married hypocrites like Newt Gingrich hide behind “respect for marriage” as they oppose gay marriage. Tennessee Congressman Scott DesJarlais, who was recorded urging his mistress to get an abortion, paid for two abortions for his own wife, and had six sexual affairs with women at a hospital he managed, hides behind “family values” as he opposes abortion for other women. The entire Republican congress has hidden behind “respect for our veterans” as they have voted to cut the budget for the VA over and over again. They hid behind “Benghazi” as they voted to cut the State Department budget for embassy security. They hide behind “national security” to justify everything from torture to the completely insane wars in Vietnam, Afghanistan and Iraq. They hide behind “fiscal responsibility” as they vote to eviscerate the Consumer Protection Bureau. They hide behind love of “the market” as they vote to make it easier for banks to gamble with money deposited by their customers that is insured by the Federal government. They have hidden behind “law and order” to get away with everything from Jim Crow laws to outfitting local police forces like fully armored regiments ready for war.

But we have arrived at a point both in the nascent Trump presidency and in our national political life when they can’t hide any longer who they are. Their desperation to support Trump at any cost is forcing them into the open. Just in the last week, we have reached an apotheosis of sorts. It seemed as if every time you turned on the TV, another mask came off. Early in the week, Attorney General Jeff Sessions, who has been on something of a campaign to recreate the “law and order” Republicanism of old, was stripped of pretense before the Senate Intelligence Committee. Relying on a tactic long used by defense lawyers  — you remember them, don’t you, Jeff? The guys at the table opposing your prosecutors — Sessions used the dodge of “I cannot recall” or “I can’t remember” so many times the news shows ran his fake faulty memory on a video loop. But that was only the half of it. Pressed on numerous occasions by Democrats on the committee to answer simple questions about the decision to fire FBI Director James Comey, Sessions invented from whole cloth a new privilege in refusing to answer their questions. When it was pointed out that only the president could invoke executive privilege, Sessions said “it would be inappropriate for me to answer and reveal private conversations with the president when he has not had a full opportunity to review the questions and to make a decision on whether or not to approve such an answer.” Sessions in effect invoked executive privilege preemptively, something which had only been attempted twice in the past: The same dodge was used a couple of weeks ago by Director of National Intelligence Dan Coats and National Security Agency Director Michael Rogers in refusing to answer questions before the same committee, making it look like all three had been coached to use this invented privilege.

Meanwhile, behind closed doors in a basement hidey-hole somewhere else in the Senate office building, Majority Leader Mitch McConnell was writing the new top-secret Republican “health care” bill, preparing to ram it through a vote before going on summer recess. It hardly needs pointing out that this is precisely what Republicans for years accused Obama of doing when Democrats passed the Affordable Care Act in 2009 — which they didn’t. It took more than a year and dozens of hearings and more than 140 Republican amendments before the ACA was passed — without a single Republican vote. Meanwhile, in yet another Senate hearing room, Senator Elizabeth Warren asked a committee chairman when they were going to see the bill and if it would strip people from prescription drug coverage, Medicare and Medicaid. He simply refused to answer her.

Back at the Intelligence Committee, for the second time in as many weeks, Senator John McCain cut off Senator Kamala Harris’ questioning of Sessions when her questions got a little too pointed. Sessions, who wasn’t enjoying being grilled by the Senate’s only African-American female member, laughed as McCain delivered his dressing down to Harris. Two white men, at least one of them having been accused of being a racist when he was rejected by the Senate for a Federal judgeship some years back, telling a black woman to essentially shut up. Any Republicans on the committee come to her defense? Nope. In fact, the chairman, Richard Burr of North Carolina, backed up McCain and closed off her questions altogether by calling time on her. By week’s end, Republicans had even tried banning reporters from interviewing senators in the hallways of the Capitol and Senate office building, before abandoning the move under intense media criticism. First Amendment, anyone? Republicans? Anybody for the Constitution these days? Apparently not.

Over at the Pentagon, generals in the halls of the E-Ring were celebrating the news that Trump was turning the wars in Iraq and Afghanistan completely over to them, allowing policy on troop levels to be set by the Pentagon. Civilian control of the military? Yet another constitutional principle apparently abandoned by Republicans in their reflexive support of Trump. Where this Republican support is coming from as Trump’s poll numbers head ever closer to 30 percent, and why it is still being given by Republicans on Capitol Hill in the face of one scandal after another, one insane tweet after another, is a question Republicans will have to answer sooner rather than later. It is regularly reported that it’s all about congressional Republicans just wanting to push through their so-called “conservative” agenda of tax cuts for billionaires and health cuts for the poor. But as that agenda has stalled, that excuse isn’t holding much water.

It’s becoming more and more clear that the crazed tone of Trump’s presidency is, as they say, a feature and not a bug of modern-day Republicanism. Conservative has become just another word for nothing left to lose. They have become the All-or-Nothing Party. They are showing every sign of being willing to go over the falls with Trump. With speculation rising about whether or not Trump will go all Saturday Night Massacre, fire Special Counsel Robert Mueller, and transform us overnight from a democracy into a totalitarian backwater, I guess we shall see. But whatever Trump decides to do in the coming weeks, the way the Republican Party is handling itself is going to stick to them for a long time. It’s going to be very, very hard to forget the image of a racist like Jefferson Beauregard Sessions laughing in the face of an African-American Senator like Kamala Harris as she’s being told to shut up and sit down. Those who kept their mouths shut and stood with Sessions at such a moment might keep their jobs for the time being, but they won’t keep their reputations.