Why Trump's drug addiction task force should freak you out

Some cannabis advocates fear Christie-led panel will not follow the science. 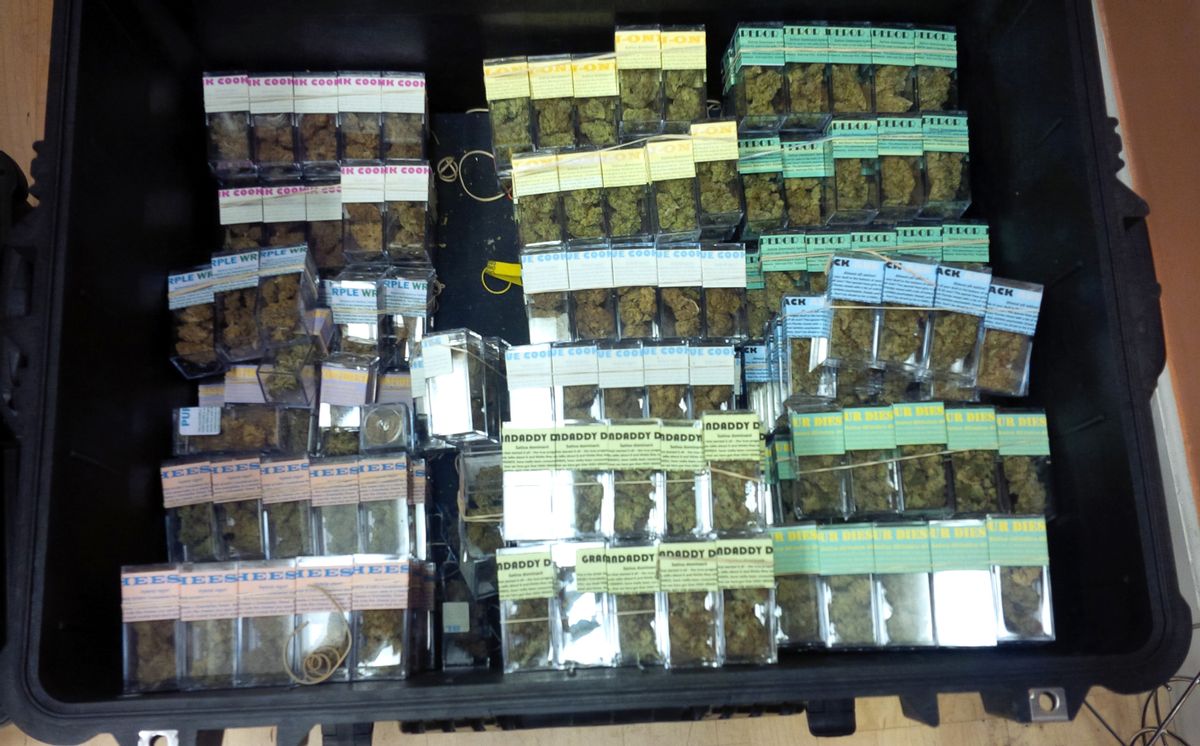 The American opiate crisis continues to spiral out of control with no end in sight. And the numbers stagger the mind.

To battle this deadly crisis, President Donald Trump in March created the President’s Commission on Combating Drug Addiction and the Opioid Epidemic, an advisory committee designed “to review the state of drug addiction and the opioid epidemic and make recommendations regarding how the Federal Government can best address this crisis.”

On Friday, the task force will hold its first meeting at the White House, to be livestreamed beginning at 12:30 p.m. EST.

Almost immediately after announcing the committee, Trump selected New Jersey Gov. Chris Christie to lead it. Clearly, solving America’s opioid epidemic will take bipartisan cooperation. This is simply not an issue in which there is much disagreement.

Sen. Claire McCaskill (D-Mo.) welcomed the news of the task force. “Drug overdose deaths, the majority of which are from heroin and prescription opioids, are a national crisis,” McCaskill said in a written statement. “We’ll need the help of Governor Christie, President Trump, and others at all levels of government, from any party affiliation, if we’re going to make progress and save lives.”

But many health professionals and cannabis advocates are wary of Trump’s task force. Nearly all the members selected to the committee have spoken out against marijuana legalization — which runs counter to the overwhelming majority of the American people. Christie, an ardent longtime opponent of cannabis regulation, will lead these members:

Massachusetts Governor Charlie Baker, former U.S. Representative Patrick Kennedy, Dr. Bertha Madras of Harvard Medical School and North Carolina Governor Roy Cooper. All but Cooper have a record of conflating cannabis consumption with opioid addiction. When you add the fact that Attorney General Jeff Sessions clearly wants to put the brakes on cannabis reform, you can understand the trepidation of marijuana advocates.

“Governor Christie has zero percent credibility on drug policy,” Eric Altieri, the executive director of NORML, told Forbes last month. “When it comes to cannabis’ relationship to opioids from real-world experience, not bluster and rhetoric, states that have medicinal and recreational cannabis laws on the books see lower rates of overdose, lower rates of use, and lower rates of opioids being prescribed to patients,” Altieri added.

In Forbes’ story titled “Chris Christie Is The Last GOPer Who Should Be Leading Our Opioid Fight,” Altieri slammed the N.J. governor and unsuccessful presidential candidate as a suitable task force chairman:

Christie has spent much of his time as governor (and, as it happens, much of the opioid crisis) fighting the rising tide of calls for cannabis reform in his state. Last week, as part of opioid-themed comments, Christie even called the ever more crucial and commonplace drive to bring regulated adult and medical cannabis use to New Jersey “total stupidity” and “baloney,” and described any tax revenues from the industry as “blood money. …

In response, NORML released an open letter to the governor days later, explaining in simple terms how scientific and social research have repeatedly shown that cannabis offers quite the opposite of “baloney” in the face of opioid addiction. Citing years of evidence-based conclusions, the letter pointed out, “It makes no sense from a public health perspective, a fiscal perspective, or a moral perspective to perpetuate the prosecution and stigmatization of those adults who choose to responsibly consume a substance that is safer than either alcohol or tobacco.”

According to a 2106 survey published in The Journal of Pain, patients suffering from chronic pain report a 64 percent decrease in opioid use. They also experience fewer negative side effects and say their quality of life is better than what they experienced under opioids.

A 2o14 study published in JAMA The Journal of the American Medical Association, revealed that opioid overdose deaths were roughly 25 percent lower in states that allowed medical cannabis compared with those that did not.

Even the the National Institute on Drug Abuse disagrees with Christie. According to NIDA:

The Christie-led task force meets just days after a firestorm over Sessions’ desire to crack down on states that have medical marijuana programs in place — defying 94 percent of the American public. Sessions, who oversees the DEA, continues to mistakenly conflate the opioid crisis with marijuana consumption.

The members selected to the opioid crisis task force appear to share the views of Christie and Sessions. Here is a brief rundown of each member:

As noted above, Christie is one of the nation’s leading voices in the anti-legalization movement. Last month, he had this to say about legalization: “We are in the midst of the public health crisis on opiates. But people are saying pot’s OK. This is nothing more than crazy liberals who want to say everything’s OK.” Clearly, his comments run counter to the scientific evidence.

Kennedy, a liberal Democrat who has publicly admitted to his past addiction to opioids, benzodiazepines, alcohol, stimulants and cocaine, is affiliated with Project Sam, an anti-cannabis organization. He crisscrosses the country and appears routinely on cable news programs vilifying cannabis legalization. Earlier this year, Kennedy was interviewed by Yahoo News and made the audacious claim that the medicinal use of marijuana was “a Trojan horse designed to addict people.” Kennedy says that Project Sam’s main focus is “educating the public about the harms of marijuana legalization.”

According to Kennedy, “marijuana destroys the brain and expedites psychosis. It’s just overall a very dangerous drug. In terms of neurobiology, there’s no distinction between the quality and types of drugs that people get addicted to. That’s why they call it a gateway drug. Addiction is addiction is addiction.”

Baker, a Republican, has supported medical marijuana but was a fought vigorously against recreational legalization in Massachusetts in last year’s election. NORML gives the governor an F grade for cannabis policy. During the 2016 campaign for legalization, Baker, a former health insurance executive, said “I’m going to oppose that and I’m going to oppose that vigorously … with a lot of help from a lot of other people in the addiction community.” He has also believes marijuana use is a “significant first step” toward addiction to other drugs. The “gateway theory” has been debunked over and over again. There is no science to support his claim.

Last year, he wrote an opinion piece in the Boston Globe headlined “Mass. should not legalize marijuana” in which he conflated cannabis use to opioid addiction.

Madras is the former Deputy Director of Demand Reduction for the ONDCP and is the one non-politician on the task force. She authored a story in the Washington Post headlined “5 Reasons Why Marijuana is Not Medicine” and has fought against rescheduling marijuana. She has called marijuana legalization “tragic for our country”

North Carolina Governor Roy Cooper, a Democrat, defeated incumbent Pat McCrory last November. McCrory was an ardent opponent of marijuana legalization. Cooper, so far, has been mum about his position on cannabis.