No ally of progressives, the Apple CEO's anti-tax sentiments reveal how entrenched in the corporate elite he is 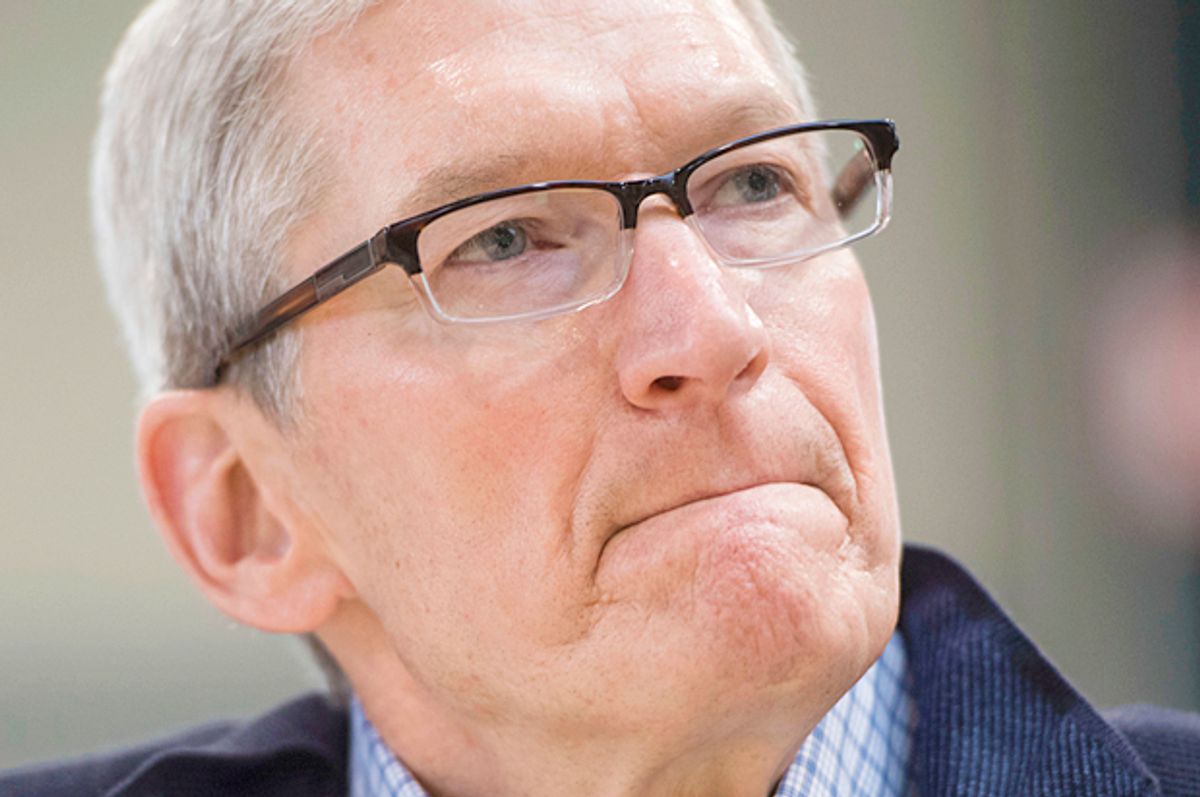 In a recent interview with Bloomberg Businessweek, Apple CEO Tim Cook had a frank and forthright discussion about life, politics and the future of his company. In it, he showered the late Apple co-founder Steve Jobs with adulation. He talked about Apple’s new HomePod voice-controlled speaker. He was practically giddy about augmented reality technology. Then, the CEO — who is sometimes celebrated as a progressive hero for his social views — gave a political opinion that is on par with the policy papers issued by some of the most regressive, far-right think tanks. “The [corporate tax] rate [should] get as low as it can go,” Cook said.

“I don’t know what that would be. Maybe it can get to this 15 percent people are talking about. Maybe not. Maybe it’s 20,” he said, referring President Trump’s proposal to slash the corporate income tax rate from 35 percent to 15 percent. (Republican House Speaker Paul Ryan’s tax plan offers a less drastic reduction to 20 percent.)

Independent budget experts say reducing the federal corporate income tax rate to 15 percent would reduce federal revenue by $2.4 trillion over a decade, a loss that would balloon the national debt and inevitably lead to federal spending cuts.

Cook said the steep reduction could be partially offset with “zero deductions,” meaning that corporate accountants wouldn’t be able to whittle down the rate using loopholes. But even with no deductions, many of the country’s largest companies would still be able to chip away at their taxes with mechanisms like the research and development tax credit that Apple receives.

The study, which looked at 258 large U.S. companies that reported annual U.S.-based profit from 2008 to 2015, concluded that only one in four of these companies paid more than 30 percent in federal corporate income taxes on their profits. The average tax rate for these companies, which include well-known big names like General Electric and Priceline, was 21.2 percent.

“These findings refute the prevailing view inside the Beltway that America’s corporate income tax is more burdensome than the corporate income taxes levied by other countries, and that this purported (but false) excess burden somehow makes the U.S. ‘uncompetitive,’” the report said.

Toward the end of the interview, Bloomberg interviewer Megan Murphy pivoted to a Republican plan to give a one-time 10 percent tax rate on more than $2 trillion in earning that corporate America is stashing in overseas tax havens like Ireland and Luxembourg.

Proponents of the practice, including Cook, argue that the U.S. has the highest corporate tax rate of industrialized economies, which is true. Among the countries in the Organisation for Economic Co-operation and Development, the 35 percent statutory corporate income tax rate is indeed the highest, just ahead of France. But critics point out that large profitable U.S. companies wind up paying much less than the statutory rate once deductions and credits are applied.

The so called repatriation tax holiday would provide an incentive for these companies to bring those global profits to the United States by charging them less than a third of the 35 percent federal corporate income tax rate. With $260 billion in global profits domiciled in Ireland at a near-zero tax rate, Apple is one of the companies with the most to gain from the tax holiday.

The plan, Cook said, is “what’s good for America.” Critics beg to differ.

If the GOP moves forward with the proposal, it would be the second time companies have been able to hold tax revenue hostage by hoarding profits abroad. The first repatriation tax holiday occurred in 2004, with lawmakers promising it would be a one-time deal that would never be repeated. Now, the GOP is poised to offer the deal once again.

“If multinational companies believe that every 10 years they’ll get a tax holiday, it incentivizes them to continue to keep money offshore,” Gary Kalman, executive director of the Financial Accountability and Corporate Transparency Coalition, told Salon.

Cook has been complaining about the burden of U.S. corporate taxation for years, but now he has a powerful ally in the White House ready to give him what wants. Slashing corporate taxes to 15 percent might not be good for America, but it’s great for Apple’s bottom line.