Dutch dads lean out: How taking "a daddy day" became the norm in the Netherlands

It's not only mothers who have achieved an enviable work-life balance, thanks to this innovative workplace policy 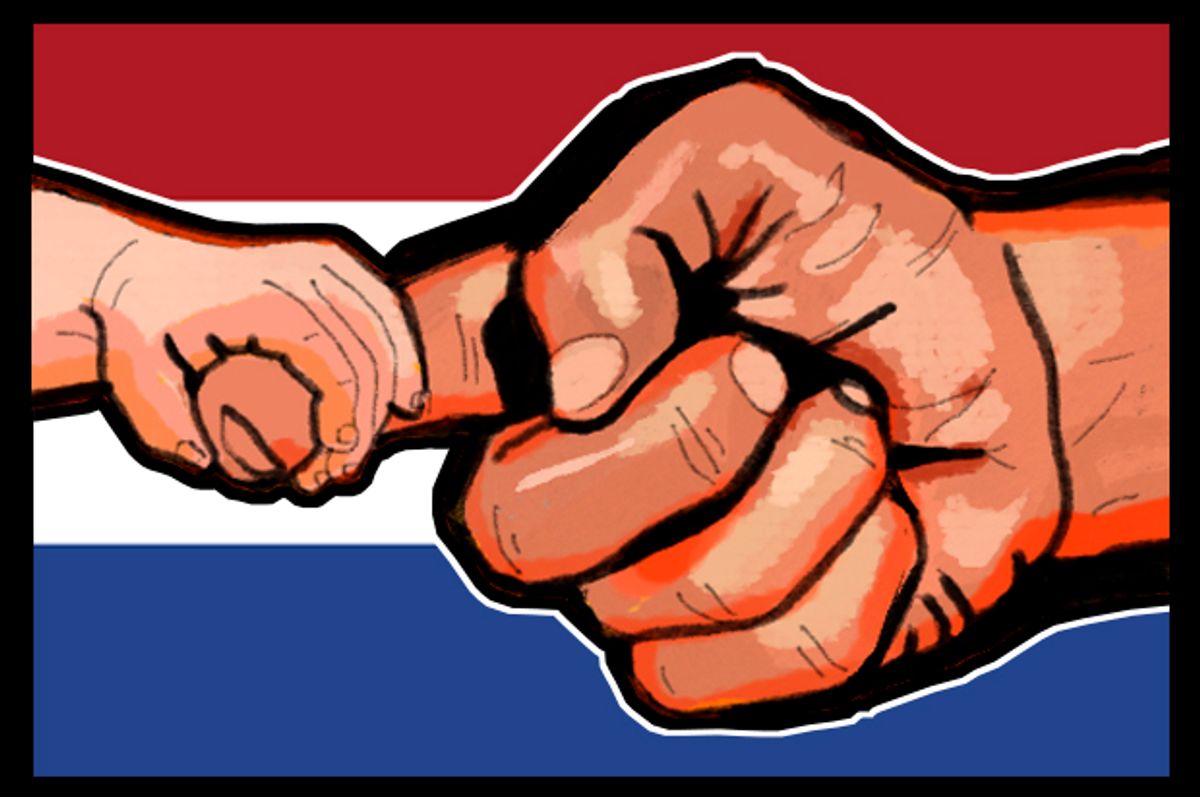 An adapted excerpt from "The Happiest Kids in the World" by Rina Mae Acosta and Michele Hutchison, published by The Experiment, 2017.

The Netherlands has a reputation for being a liberal country with a tol­erance for sex, drugs and alcohol, yet beneath this lies a closely guarded secret: The Dutch are actually fairly conservative people. At the heart of Dutch culture is a society of home-loving people who place the child firmly at the center.

Dutch society has fought for and achieved an enviable work-life bal­ance. As the part-time-work champions of Europe, the Dutch work on aver­age twenty-nine hours a week, dedicate at least one day a week to spending time with their children, and pencil in time for themselves, too. You won’t find a Dutch mother expressing guilt about the amount of time she spends with her children — she will make a point of finding time for herself outside of motherhood and work. Sturdy, windswept and self-assured, these moms don’t start to stress about getting back into shape the minute they leave the hospital with their new baby. And Dutch moms don’t do for their children things they are capable of doing themselves — they believe in encouraging independence at the appropriate age. They are confident and calm. There’s none of that “mompetition” or mommy guilt you see in the U.S. and the UK.

Dutch fathers, especially those who are dads to babies and toddlers, believe in taking a more equal role in child-rearing and household chores. They look after their kids on their days off and help put the little ones to bed. You’re just as likely to see a dad pushing a stroller or wearing a baby-carrier as a mom. And when a child has a temperature, for example, Dutch parents will take turns staying at home with the child, with most employers showing understanding and leniency.

The culture of part-time work is one reason why everyone is much happier over here. The Dutch have the shortest average working hours of any OECD country and work the fewest hours per week of any country in the EU. Nearly half of the Dutch adult population (again, by far the highest percentage in the EU), works part-time, with 26.8 percent of men working less than the maximum 36 hours a week and 75 percent of women working part-time — and this is across all sectors, from unskilled laborers to professionals.

Compare this to the UK, where 25 percent of the population works part-time (13 percent of men, and 43 percent of women). In the US, the percentage is even lower: 18.9 percent (12.6 percent of men, and 25.8 per­cent of women). In Holland, part-time work has become the norm: For many Dutch fathers, it is as important to share childcare and household chores as it is to pursue their career. They understand the importance of having a more active role at home and are lucky to have employers who understand and support this.

The role of dads in the development and well-being of children is now recognized by researchers and medical professionals; there is plenty of compelling evidence in the scientific literature. The HBSC studies that formed the basis of UNICEF’s report on child well-being suggests that Dutch children’s relationships with their fathers have improved incrementally in step with the increased time dads spend caring for their children.

When the full-time working week was reduced to 36 hours in the Netherlands to combat unemployment, the government compen­sated those who had been working a 40-hour, nine-to-five week by giving them extra vacation of half a day a week, or one day a fortnight. This time off is frequently used by fathers as their Papadag. Taking a “Daddy day” is becoming the norm, as more and more Dutch fathers see the benefit of spending time with their kids at least once a week. (Some Dutch parents are offended by the word Papadag, as it implies more of a babysitting role for fathers rather than equitable shared parenting responsibilities 24-7. The proposed alternative is kinderdag, but even then there is no consensus to the word.)

Curious to know more about Papadag, I ask a close friend of mine, Mathijs, about it. “Papadag is pretty common, especially within the pub­lic and government sectors here. It was an easy choice for me to work four days a week. I appreciate the extra time I get to spend with my daughter alone and, while she’s napping or playing with a friend, I can work a bit, too, checking email and doing some short-attention work,” he says.

“I read some time ago that the male influence is important for a kid, especially when there’s a lot of female teachers at school. Let the dad be the dad. That means going outdoors, doing physical stuff with her, wres­tling and fighting a bit. For example, today, Friday, I was looking after her after school. She had a friend with her, and I took them into town on my bike. Got them outside, to catch some UV light and fresh air in these dark November days. We ran through the shopping mall, made a few turns round a revolving door, cracked jokes, and then I bought them each a chocolate Sinterklaas [St. Nicholas].

“Afterwards, when her friend had gone home, we went out again for some football in front of our house. I also organized a cycling competi­tion with the boy next door. A bit of physical stuff, good for her and fun for me as well!”

In my family, we follow a more traditional model, with me working part-time at home as a freelance writer and my husband working full-time. Yet Bram, too, does his share of Papadag, only he spends time with them on weekends rather than during the working week. He’s in charge of the week’s grocery shopping, taking our three-year-old with him, and does all the weekend cleaning, laundry and vacuuming, after which he’ll take Julius to the zoo or the pool. When our baby is a little older, he’ll take over with him, too. For me, it’s my time to catch up.

In a culture where one’s job is inextricably linked to one’s identity, American dads who lean out can face isolation and stigma. Many men of my generation aspire to be hands-on fathers who change diapers, cook dinner and do the laundry. But the sad reality is that for many who start out with these lofty, progressive ideals, the pressures at work, in the long run, make it impossible.

In America, parenting is seen as your problem: a private rather than a communal concern. You’ve taken the decision to have children, that’s your choice – deal with it. In the Netherlands, however, it’s something for which the whole society takes responsibility. Dutch parents often have a rich support network consisting of grandparents, siblings and neighbors who can be counted on to keep an eye on the children. The ideal child­care structure consists of both parents working part-time, and the family getting additional help from both sets of grandparents, neighbors and the local crèche, or from “guest parents” – certified babysitters who look after the children in their own home. It’s the modern-day village.

Rina Mae Acosta, along with Michele Hutchison, is co-author of "How Dutch Parents Help Their Kids (and Themselves) by Doing Less".

Michele Hutchison, along with Rina Mae Acosta, is co-author of "How Dutch Parents Help Their Kids (and Themselves) by Doing Less".