As the 1 percent washes their money through arts funding, artists respond

In an age of rising financial inequality, artists are using their work to follow the money 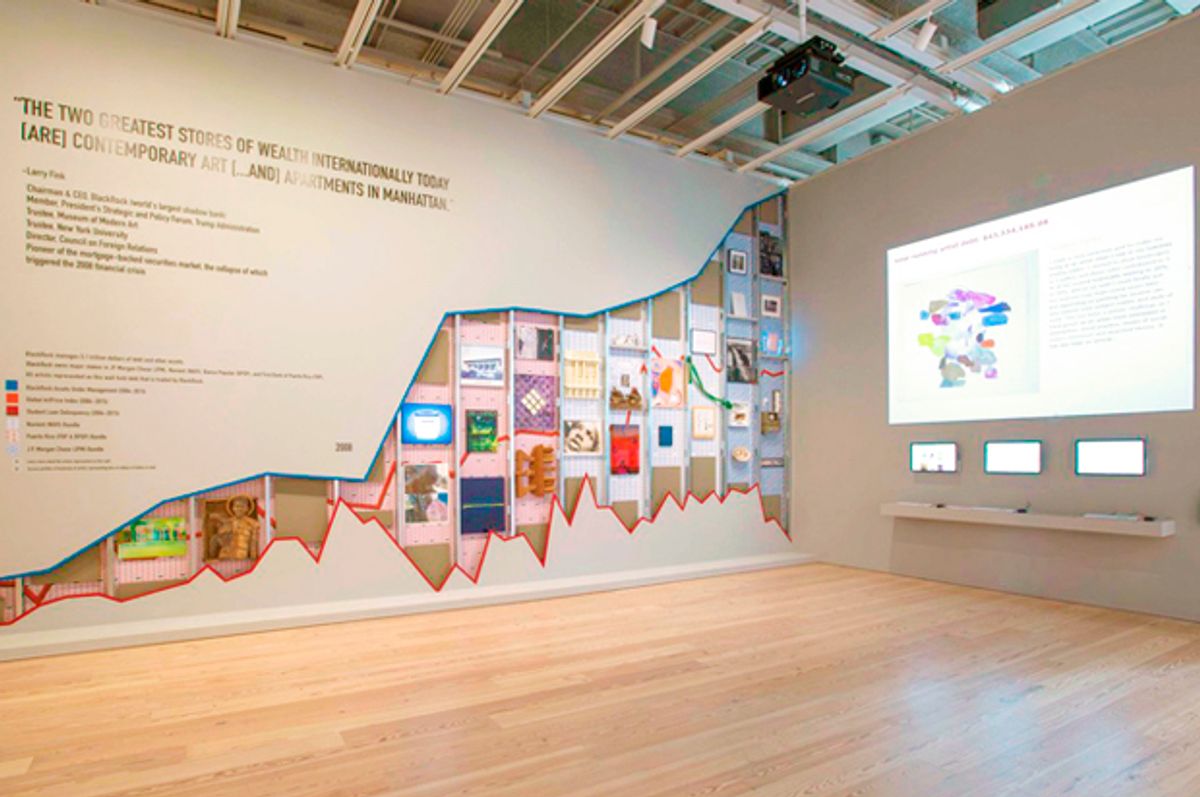 At the most recent edition of the Whitney Biennial, the long-running survey of American art, visitors were greeted by a quote of the sort not usually seen in museums: “The two greatest stores of wealth internationally today [are] contemporary art [. . . and] apartments in Manhattan.”

The words, from Larry Fink, a member of President Donald Trump's Strategic and Policy Forum and CEO of BlackRock, one of the world’s largest investment management firms, were written over a craggy graph carved into the wall tracking the rising value of the debt levels owned by the firm. Alongside were showcased the work of 30 artists, all of whom are in financial debt.

The piece, which highlights the art world’s tangled relationship with finance, was the latest iteration of Debtfair, an ongoing investigation into the business of art by the Occupy Museums collective — and it’s just one of the ways artists are following the money to shed light on the infamous opaque $50 billion global art market and how the economy of culture really works.

“We framed the whole project as basically asking the question: Who are American artists?” says Noah Fischer, a New York-based artist and initiating member of Occupy Museums, the art activism group that grew out of the 2011 Occupy Wall Street demonstrations in Manhattan’s Zuccotti Park. The Debtfair project, which uses self-submitted data from artists, examines the ways both the labor and the debts of artists help fill the pockets of big business.

As part of the exhibition, the group put together a CV of all of the artists in the Biennial and found that the 63 artists and collectives in this latest class of American artists represented more than 100 academic degrees and carried together nearly $6 million in student loans. It’s a sobering reminder that the works in the museum, and not just those that are part of the project, are all mired in a system that enriches a select few off of the work of many. After all, one of the exhibition’s sponsors, JPMorgan Chase, holds the debt of at least 10 artists in this show.

“I don't think we're making a claim that artists have any special role to finance, but finance has come to the art world,” explains Occupy Museum’s Kenneth Pietrobono. “Artists have such proximity to finance that there's almost this responsibility or agency. We're coming to the cultural sphere, seeing the way that the financial world is using it . . . to wash their money in order to erase the shady environmental or socially unacceptable ways that that money is acquired.”

It’s not just the debt that artists often accrue to gain entree into the art world (despite the complete lack of economic security in the field) and the vast sums of money fetched by top pieces — like a recent record-setting Sotheby’s sale of a work by Jean-Michel Basquiat at auction — that ties art to finance. Even before the new political administration’s proposed budget cuts to arts funding, the United States has done little to sponsor the arts when compared to counterparts around the world, leaving much of the presentation of culture beholden to philanthropy. It’s a system of funding that creates a backing-based narrative of what is shown, what is sold, and therefore what becomes the artistic canon. (Such a relationship was recently cast into the public attention when Museum of Modern Art president emerita Agnes Gund announced the sale of a $150 million painting by Roy Lichtenstein to fund criminal justice reform, calling on other prominent collectors to take similar action.)

This connection between art and financial activism is where Andrea Fraser is currently focusing her attention. The artist has used art to critique institutions, including prisons and museums, in the past. Her latest work looks at the money trail linking major museum donors to politics.

“At this point, I'm not sure that it's possible to make categorical distinctions between art and other media,” Fraser wrote in an email when asked how art can shed light on issues in the news. “The art I make aims not only to communicate content but to activate social structures and relationships in an immediate way, as we experience and participate in these institutions. I might try to do that by creating an immersive installation, or by using performance to explore how institutions are internalized and embodied, or by developing research that is aimed specifically at the conflicting interests of its most likely audience.”

The project will take the form of a book that documents the reported political contributions of the trustees of 100 art U.S. museums from January 2016 to the present. Her research, gleaned from public campaign donation records, has shown that while most donors support progressive candidates in major art centers (New York, Los Angeles and Chicago), the largest sums of money (and therefore influence) have gone to conservative causes. She anticipates the book will reach 1,000 pages, “even with a dense layout.”

“For me, this is an intersection between wealth concentration and plutocracy,” Fraser says. “It’s about how the U.S. system of privately funded cultural institutions, governed by wealthy patrons, mirrors and serves to legitimize a system of government by and for the wealthiest members of our society, whose disproportionate influence on legislation and policy is now well documented.”

Beyond the current political climate, artists and curators are creating projects that question our economic system at large. This weekend, The Museum of Capitalism opens in Oakland, California, a city currently wrestling with its own gentrification. It's an issue that often casts artists in a central role before pushing them out.

Founded by curators FICTILIS (Andrea Steves and Timothy Furstnau), and funded by a grant from the Emily Hall Tremaine Foundation, the Museum of Capitalism is located in a waterfront building among vacant retail space in the city’s Jack London Improvement District, where it plays with the idea that the capitalist system is something of the past that can be viewed through the lens of an art.

The inaugural exhibition features work by more than 50 artists, alongside such familiar trappings as a library and even a gift shop. And in keeping with the project’s mission of “educating future generations about the ideology, history, and legacy of capitalism,” it’s free to the public and intentionally located convenient to public transportation.

“One thing that art excels at is displaying critique and creating this place where critique can be done, but maybe it doesn't reach a wider audience or have an influence outside of the bubble of the art world,” Furstnau explains. And that’s exactly what the museum has set out to do.

Along with the exhibitions, which include artwork and capitalist “artifacts,” the organizers hope to reach a wider audience through a series of events and activations, including their conceptual gift shop. A companion book — part exhibition catalogue, part art piece — will be published by Inventory Press later this summer. Together, it’s meant to provide a forum to take a hard look at what we mean when we talk about capitalism today.

“There's a sense in which we're not even really sure when something is over. Some of these museums of conscience that look back at historical phenomena claim that something is over, but perhaps it still exists in another form,” adds Steves. “When capitalism ends, it's probably not going to be a single point that you can put on a timeline. It's collective action that happens over time. Part of this [project] is playing with this idea: When is something over? When can you look back on something? When is there enough space and enough distance?”

For these artists, like certain voices at the far ends of the political spectrum today, the time to take a closer look at economic and political systems in the United States is now.