At 20, Radiohead's "OK Computer" becomes an album for the Trump era 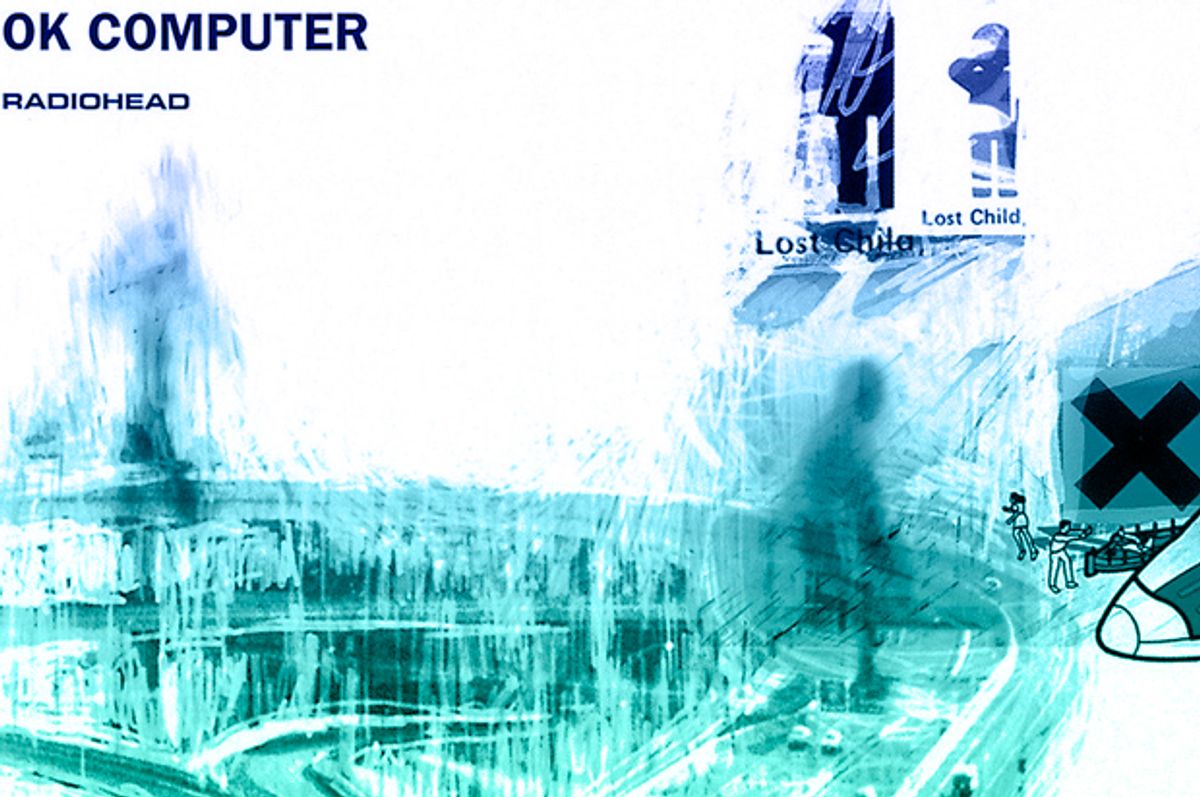 To celebrate the 20th anniversary of "OK Computer," Radiohead is releasing a special edition of the album. Called "OKNOTOK 1997-2017," the deluxe release features remastered audio of the original album, b-sides and three unreleased tracks that have long been fan favorites: "I Promise," "Man Of War" and "Lift."

The retro fanfare might seem out of character for the Oxford, England-formed quintet, whose entire career has been predicated on forward motion and defiant self-invention. However, "OK Computer"— named after a phrase the band heard in an audio version of Douglas Adams' "A Hitchhiker's Guide to the Galaxy"— is a special exception. Released in 1997, the record is a sophisticated critique of a society on the verge of a technological zeitgeist. Skepticism and cynicism abound, as does disaffection and a morose outlook on life.

Unsurprisingly, "OK Computer" sounds eerily prescient in light of today's post-election gloom. Lyrics chastise oppressive jobs and bosses ("Karma Police"), the ugly side of being rich ("Paranoid Android" and its memorable line, "Ambition makes you look pretty ugly/Kicking and squealing Gucci little piggy") and the moral bankruptcy of politics ("Electioneering")."We live under a world banking system and media that make it almost irrelevant who is in power," is how vocalist Thom Yorke described the latter song to Vox. "Political systems worldwide are at the mercy of business and bullshit economies."

Elsewhere, Yorke captures the malaise that comes from dealing with this structural oppression. "Subterranean Homesick Alien" is about feeling like a stranger in a strange land. "Exit Music (For a Film)" — which was written for and appeared in Baz Luhrmann's 1996 film "Romeo + Juliet" — mirrors the play's focus on the impossibility of romantic escape, and the knowledge that it's too late for escape. "I was basically catatonic," Yorke recently told Rolling Stone about this era. "The claustrophobia -- just having no sense of reality at all."

Radiohead's transformation into incisive cultural commentators was relatively quick. When the band burst into the public eye in 1993, it was with the self-loathing "Creep." The hit — which band members claimed in interviews was actually a happy song — saw the band touring constantly and, occasionally, coming across as goths marooned on a beach (a memorable MTV Spring Break performance).

The group's next album, 1995's "The Bends," was more focused and guitar-heavy, with nods to crunchy glam and shimmering jangle-pop. Although its cryptic lyrics hinted at where the band would go on "OK Computer," the record fit with the sound of U.K. music at the time. Still, Radiohead very pointedly eschewed the affected mannerisms and jingoistic pride favored by contemporary Britpop bands. As Yorke recently told Rolling Stone, "The whole Britpop thing made me fucking angry. I hated it. It was backwards-looking, and I didn't want any part of it."

In light of this, it's no wonder "OK Computer" sounds so fractured and antagonistic. The gleaming boogie "Electioneering" and multi-part "Paranoid Android" boast abrasive guitars that sound harsher than anything on "The Bends," while "Exit Music (For a Film)" ends in prog-like, agonized sonic buzzing. Yet "OK Computer" finds strange beauty in anxiety and isolation. "Subterranean Homesick Alien" and "Let Down" are tranquil and resigned, the soundtrack to floating underwater until you need to surface and gasp for air. The gnawing "Climbing up the Walls" is aptly named, as it's a song with knocking percussion, creaking sound effects and distorted vocals.

Studio-wise, the band experimented with different techniques. "Airbag" has a drum loop inspired by DJ Shadow, drummer Phil Selway told Melody Maker at the time. "The way he cuts up beats is amazing. The end result doesn’t really sound like what we were aiming for, but that’s probably a good thing." The TV-on-the-fritz, noisy underbelly of "Karma Police" was a scribbled sonic collage created one night by Yorke and producer Nigel Godrich.

Taken as a whole, "OK Computer" oozes discomfort; there are no salves or solutions, just a sense of futility. Even "Airbag," which has a consistent theme of rising from the ashes like a phoenix, feels ominous, because rebirth happens after a series of horrible, violent events. This song especially also explains why "OK Computer" feels so disorienting: things that should mean one thing frequently mean just the opposite.

But "Airbag" in particular feels relevant to the modern world. In fact, when Yorke quips, "In the neon sign, scrolling up and down, I am born again," it should ring true to anyone addicted to idly browsing their Twitter and Instagram feeds. Although those platforms of course didn't exist back then, Yorke was aware of how the internet could already be overwhelming.

"I was getting into the sense of information overload," he recently told Rolling Stone. "Which is ironic, really, since it's so much worse now."

His wariness back then made sense, however. In 1997, "OK Computer" arrived as the mechanisms for file-sharing, instant-gratification communication and music downloads were just coming online. The iTunes precursor Winamp, a program perfect for making MP3 playlists, launched around the same time. So did the online chat program AOL Instant Messenger, which Radiohead later used, to great promotional effect, with 2001's chatbot GooglyMinotaur. The new website MP3.com also emerged as a clearinghouse for independent artists to tout their music.

Naturally, by 1997, people were already exploiting the loopholes in this technology. Several years before its battle with Napster made headlines, the RIAA sued three websites (including one called Fresh Cutz) for copyright infringement. A quaintly titled Billboard article, "Downloading Songs Subject of RIAA Suit: Action Intended to Stem Flow of Internet Piracy," notes that these sites had posted music by Alanis Morissette, Nirvana and the Beatles.

Radiohead itself launched a website in 1996, although it was more experimental and abstract. Offline, the band itself leveraged tech culture for "OK Computer," releasing promotional items such as a floppy disk with a screensaver on it and a radio shaped like a then-sleek computer. And on the record, the song "Fitter Happier" features Yorke-written meta commentary on technology and society read by "Fred," one of the speech-to-text voice choices available on a Mac computer.

However, despite its futuristic sheen, the record doesn't totally renege on tradition. The title "Subterranean Homesick Alien" is a knowing nod to Bob Dylan's "Subterranean Homesick Blues," while the Beach Boys' "Pet Sounds," Marvin Gaye's "What's Going On" and Miles Davis' "Bitches Brew" were sonic touchstones. Guitarist Jonny Greenwood even told a journalist for Q magazine back then that he was delving into prog rock at the moment.

"It's been very disappointing, because most of it is awful," he said. "I've got it into my head that prog rock must be good because it attracted a lot of fans. So far, I've just trawled through fairly tedious Genesis albums." Twenty years later, Greenwood's stance hadn't changed much: "The problem with prog stuff," he told Rolling Stone, "is it sounds like it really has been thought about. And it's exhausting as a result. All those records were very pastoral, and they're preaching about unicorns and dinosaurs."

Fittingly, Radiohead took these established ideas and filtered them through its own unique sonic filter — a bold move that paid off with a generation-defining album.

Yorke once said the title "OK Computer" "refers to embracing the future, it refers to being terrified of the future, of our future, of everyone else's. It's to do with standing in a room where all these appliances are going off and all these machines and computers and so on . . ."

Today, that existential terror is aided by computers and other machines — pick your social media panic — and the sense that technology is a golden albatross: ubiquitous and helpful, but also something on which we rely, sometimes to detriment. "OK Computer" didn't fully articulate why this juxtaposition feels so pernicious, but the record put forward the initial wrinkles of thorny ideas we're still puzzling through today.