Seeing ourselves in "Orange Is the New Black"

The chaos left in the wake of Litchfield's riot mirrors the current state of our nation's spirit: Both are wrecked 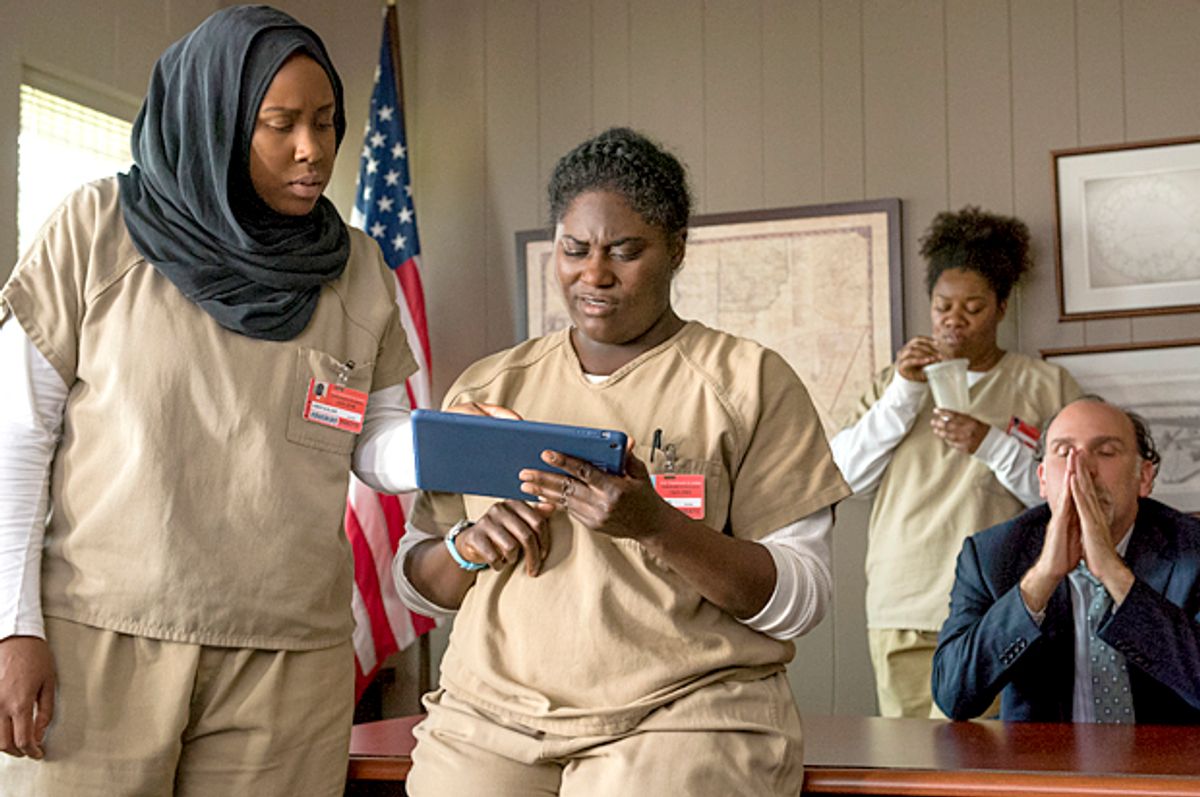 The writing team behind “Orange Is the New Black” must seem like soothsayers to some people, but no. They just have 20/20 vision, that’s all. Like so many of us, they open their eyes every morning to a fresh variant of a familiar mess and take notice. The difference is, like every other insightful creative team, they extrapolate on the depressing inspiration the news cycle provides to illustrate how the inmates at Litchfield Penitentiary would react and devise a realistic outcome. When a prisoner dies and the guard responsible for her death walks free, the inmates riot and take control of the prison, barricading themselves in.

They take hostages and demand justice. But look at the current state of the world. On Friday a jury in Minnesota acquitted St. Anthony Police Department officer Jeronimo Yanez, who fatally shot Philando Castile during a traffic stop last July. Yanez was charged with second-degree manslaughter and two counts of intentional discharge of a firearm and endangerment.

According to reports, Yanez believed Castile to be a robbery suspect. Castile informed Yanez he had a gun in the car before the officer opened fire. But Castile was reaching for his identification, his girlfriend Diamond Reynolds insists. Reynolds broadcast what happened in the aftermath of the shooting on Facebook Live.

Millions saw that footage last summer, and surely millions ache at the distress Castile’s family is enduring. But can we truly feign surprise? Upheaval is the new normal; we’ve grown so used to expecting it that last year’s horrors have lost the ability to shock. Only a month ago the Department of Justice declined to prosecute the officers who killed Alton Sterling, shot dead in Baton Rouge, Louisiana, one day before Castile. Before that the federal government refused to bring charges against the officers involved in the killing of Michael Brown in Ferguson, Missouri, and Eric Garner in Staten Island, New York.

Accepting the task of writing about the justice system requires being honest about how that system works as well as its myriad failures. In “Orange,”  Litchfield serves, for all intents and purposes, as America in miniature. And right now, spiritually speaking, our nation is a wreck. The protestations surrounding the Yanez verdict are further proof of that.

Near the end of the current season the governor's office sends former Litchfield Penitentiary executive Natalie Figueroa (Alysia Reiner) to negotiate with the uprising’s de facto organizer Taystee (Danielle Brooks) and Fig tells her that the state is willing to meet all of the inmates’ demands save for the prosecution of the guilty guard. Taystee is not willing to settle for anything less than justice.

Thus when Figueroa pleads with her “to trust the system to do its job,” Taystee's reaction verges on volcanic. “You mean the same system that don’t give a shit when some pasty-assed cop shoots a black man for spray painting a wall?” Taystee asks.“Or selling loose cigarettes? Or reaching into his pocket for his own damn keys? You mean that system? Oh yeah. They’re real trustworthy.”

Taystee’s right on that count. The system is neatly organized to enable corruption and structured to prioritize the dominant over the downtrodden. But the people for which it is responsible, who have similar needs and concerns, cannot manage to communicate with one another to achieve social and economic parity, let alone justice.

This refers to the situation inside Litchfield throughout season 5. But it could also apply to America in general.

The fifth season of “Orange Is the New Black,” like season 4 before it, can be viewed as a loose allegory for America’s psychological state. However, these new episodes do not have the benefit of a specific movement or viewpoint around which to cohere, as the previous season did so effectively.

Instead, series creator Jenji Kohan and the “Orange Is the New Black” writers ambitiously choose to remain inside the pandemonium that consumes the prison for the entirety of season 5’s 13 episodes, a revolt that plays out over the space of a few days and is put down violently. And one might point to (or blame) these circumstances as the reason that the execution of these episodes feels looser and messier than ever.

To look at the scenario in another way, the latest chapter accurately depicts the fracture afflicting the nation, conveying that sense that the country isn’t quite broken but is stumbling down a potholed road webbed with cracks.

Only a few regular characters were expanded with any profundity this season, with Taystee receiving the most meaningful expansion — an opportunity Brooks seizes and runs with, commanding the audience’s attention. Brooks seamlessly transitions Taystee into a take-charge position to the point that she even brings Litchfield's warden Joe Caputo (Nick Sandow) into negotiations, using him to go to bat for the inmates.

And as Taystee emerges to be Litchfield’s outspoken alpha, Dale Soules’ Frieda Berlin, one of the prison’s “golden girl” set, is revealed as the steady, quiet prepper who expects what’s coming and is ready for it.

Soules renders Frieda as a serious working-class woman who is crunchy and practical. A regular since season 1, Frieda is the sort of ornery older inmate the others ignore, possibly even fear. Their loss; this season she emerges as the person best prepared to wait out the precarious disarray that’s rampant inside the prison. Frieda's storyline avails the plot by adding generosity and lightness to a series of stories informed by rage, despair and madness — or in Piper and Alex’s case, ennui.

Frieda looked ahead at every possible contingency and sketched out her battle plan. She plans to survive this thing. The shame of it is, Frieda and Taystee never communicate, and they don’t bring the other subsets of women into leadership roles beyond persuading them to vote on demands.

The result? The efforts Taystee and the rest of the black women make to achieve justice for their dead friend are blown apart because another group of women holding a group of prison guards — the only leverage the inmates have — lets the hostages go. And in the space it takes for a few stun grenades to detonate, Taystee’s efforts to meaningfully transform Litchfield, the place she calls her home, vanish. She holds out for justice and by the finale’s closing credits, has received none.

Sometimes the most harrowing of stories are just that: stories. Scripted television’s job is to entertain first and foremost, and a series such as “Orange Is the New Black” cannot be expected to teach anyone a lesson any more than viewers can be asked to learn from the examples they’re witnessing.

Emotionally affecting scenes can also be encouraging, which we witness in demonstrations of fandom that play out in the real world. Bearing that in mind, maybe the more hopeful takeaways from season 5 are the sunnier subplots that bloom in the space between the premiere and the finale. None of the women in Litchfield can rely on the people outside the prison to act in their best interests; the world taught most of them that lesson long ago, which helps in part to explain why most of them are inside.

For a brief period, though, they reclaim their spaces, acting on the sliver of control they have over their  enclosed world. A few women create a bazaar in one of the hallways, Pennsatucky (Taryn Manning) mixes up a sweet beverage and delivers it to the people she encounters. Tribal borders loosen, and there is some version of peace. And, in a humorous exchange, one of Litchfield’s white supremacists bonds with a fellow prisoner, a Latina, over a mutual affection for high-quality coffee. It all falls down again, but in those brief moments the show depicts the other side of chaos and that infrequently depicted truth that within it exists the potential to unify and create that can be as potent as its capacity to divide and disrupt.