Yes, Democrats need a civil war: Believe it or not, it's the only real path back to power

Papering over the party's internal conflicts only led to defeat. Without open debate, victory will never come 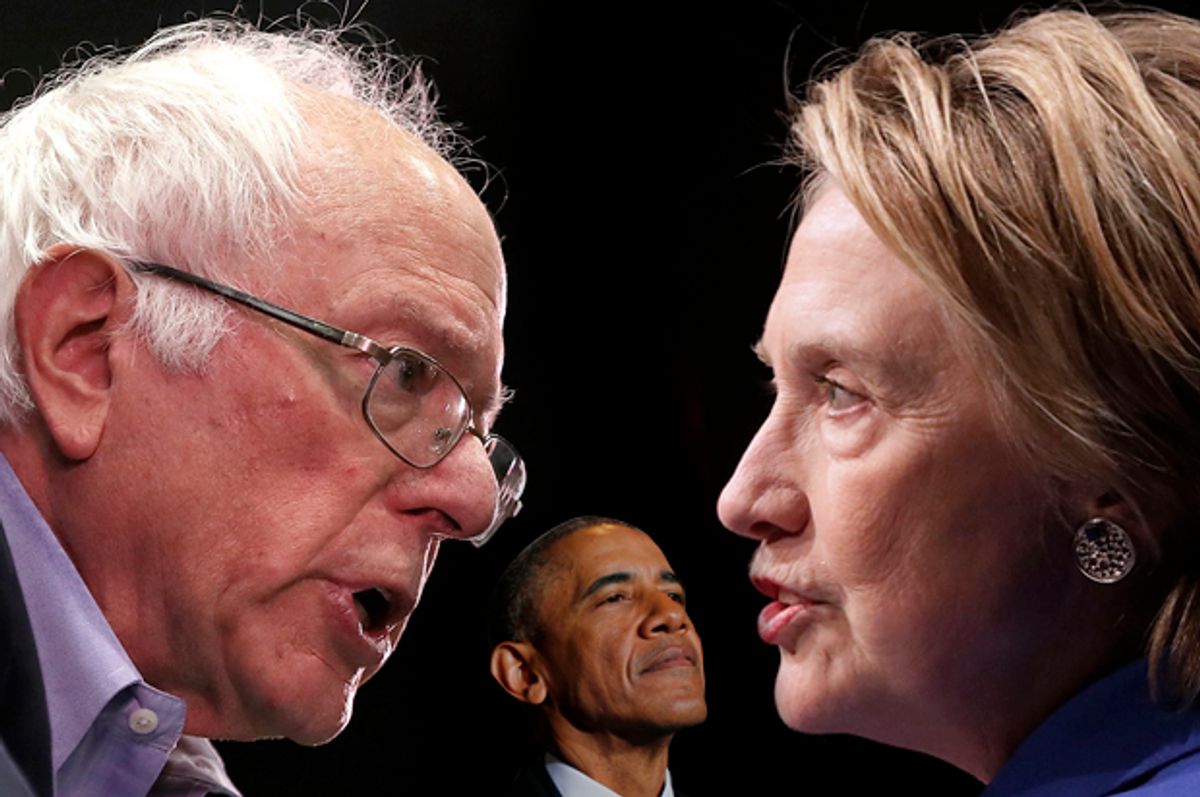 In April, Bernie Sanders and Democratic National Committee chair Tom Perez took off on a bumpy cross-country road trip. Their "unity tour" mostly served to highlight their differences and remind people that Sanders is not actually a Democrat. May it be a lesson to Democrats: Unity requires agreement, which requires debate.

Many expected 2016’s losing party to engage in fierce debate and a bloody civil war. Had Republicans lost, they’d have opened fire on one another in their concession speeches. Democrats took another tack. First, they rehired all their top management; their discredited consultants and decrepit congressional leaders. Then, in the spirit of Debbie Wasserman Schultz, they cancelled the debate.

Party elders say it’s no time to squabble. They always say that. The specter of an emotionally arrested, proto-fascist fraud in the White House adds force to their argument, but ducking debate is what got Democrats here in the first place. This is in fact the exact right time, maybe even their last chance, to have one. So, what’s stopping them?

One problem is President Donald Trump. The danger is that while rubbernecking his 50-car pileup of a presidency Democrats run their own car into a ditch. A favorite Democratic strategy is to sit idly by, waiting for Republicans to implode. Trump’s serial idiocy and fast-mounting legal woes may trick them into thinking this time it may work.

Barack Obama is another problem. His charm was the glue that held Democrats together. They need to own their mistakes, which, by and large, are his. It’s a tender topic. Democrats in love with Obama prefer defending his legacy to saying what they’d do different. They pay a steep price for letting their feelings cloud their vision.

Political parties’ civil wars often take the form of insurrections. In 2009, the GOP base laid siege to the party, driving scores of incumbents from office. In just seven years, the worst Republican Party ever perfected a near monopoly of power. Democratic leaders warn their base that intraparty warfare would spell their doom. But it was while Democrats papered over their differences and Republicans shot each other in the streets that Republicans drove Democrats into exile. Civil wars, while risky, are also the chief means by which political parties are renewed.

The divisions that led to Republican civil war were relatively minor. Apart from the bank bailout, the principal grievance of the GOP base was that its leaders didn’t simply arrest Obama. Divisions between the Democratic base and its elites ran far deeper, yet there was little unrest to speak of. A crucial factor was the tight bond between the party and institutions that purport to speak for the base.

Progressives once prized their independence. For a century, independent, progressive movements gave the party vision, energy and spine. Late 19th-century populists, early 20th-century progressives and the mighty, mid-20th century labor movement kept Democrats in a constant state of political and intellectual ferment. Thus was forged a social contract, and with it the modern middle class.

In the early 1980s, liberal groups formed political action committees and entered electoral politics. The party soon colonized them. Grassroots movements morphed into Washington lobbies, trading the politics of pressure for the politics of access. They became so obsessed with defending Democrats, they lost the will to challenge them. Both sides were better off in a more arm's length relationship. Progressives can do little when they are chloroformed and pinned down in a Democratic display case.

In 2016 Sanders backers fumed over the Democratic National Committee's conniving with Hillary Clinton's campaign. But the DNC could screw up a two-car funeral. It’s too ineffectual to effect anything as big and complicated as an election. Progressives made Clinton. Without labor, she’d have opened the 2016 campaign with three straight losses (in Iowa, New Hampshire and Nevada). Labor’s top goals were blocking trade deals and enacting a living wage. Sanders was with labor. Clinton wasn’t. He outperformed her in nearly every general election poll. Labor went with her anyway, often without consulting the rank and file.

What hope and energy we have comes from web-based mass membership groups like Democracy for America and Moveon.org and upstarts like the Working Families Party (which endorses but also primaries Democrats while seeking its own spot on the ballot)  and 350.org (which doesn’t even do electoral politics). But the new kids on the block can’t do all the heavy lifting.

People hear debate on the left and think the Democratic Party is having one. But party leaders debate only when forced to by their base. Much of the left no longer engages the Democratic Party. The Tea Party showed us how much incumbents fear primaries, yet the Green Party is content to run protest candidates in general elections. The problem isn’t just votes lost in November but energy drained year-round from a party in desperate need of a revolt. The left still doesn’t know how or where to bring the fight. The goal isn’t just to reform the party establishment but to replace it.

Even if Democrats woke up tomorrow morning wanting to debate, they might not know how. In the '80s, Republicans poured hundreds of millions of dollars into right-wing think tanks. Democrats invested their more modest fortunes in pollsters and consultants. To this day, when Republicans make a case, Democrats tell a story, which is sort of like bringing cotton candy to a knife fight.

Democrats waste millions on corporate marketing techniques that work only for the other side. Their technology contains the seeds of their defeat. The 2012 Obama campaign was hailed for its advances in data mining and narrowcasting to niche markets. But saying different things to different people isn’t how you get change. It’s how you stop it. The way you get change is by engaging a whole nation in a single debate.

I was once privileged to work for the nuclear freeze movement. We didn’t have different ads for different states. If we had a slogan, I can’t recall it. We weren’t for "world peace." We were for a bilateral, verifiable freeze on the development, production and deployment of nuclear weapons. Without concreteness and specificity, there can be no real demand or debate. Change comes via primitive forms of communication: People sharing values face-to-face, not for 30 seconds or 140 characters, but for as long as it takes to change a mind or explain a new idea.

In farewell interviews Obama was often asked to name his biggest mistake. His invariable response: He wished he’d done a better job “telling our story.” But he didn’t need to tell a story about Obamacare. He needed to fix it. Democrats listen too much to nimble thinkers like Drew Westen and George Lakoff who tell them they need narratives and metaphors to reach past our prefrontal cortexes to regions of the brain that run our emotions. Maybe, but do our reptilian brains ever choose progress? Democrats don’t need a story; they need a blueprint.

The greatest impediment to debate is of course the Democrats’ addiction to high-dollar fundraising. Big money doesn’t just favor one party over the other; it mortgages both parties to the status quo and thus to the past. Democrats craft separate messages for their donors and their voter base, encrypting each of them in hard-to-crack code. The result is a message so muddled no one understands or trusts what they say.

In 2016 more millennials voted for the Libertarian Party than the Green Party, perhaps because the loudest voice in Congress to defend our privacy and resist our impulse to empire is Rand Paul’s. Democrats must help America see that its safety lies not in force of arms but in the rule of law, and that assaults on privacy are assaults on one's very personhood. On the overarching issue of our time, climate change, Democrats still don’t speak loudly or clearly enough. There are so many issues Democrats are afraid to debate; it’s hard to know where to begin. They might start by facing three huge issues left unresolved in 2016:

Health care: Democrats scorn Republicans for not producing a plausible alternative to Obamacare, but neither have the Dems. Obamacare isn’t dying, but it has a fatal flaw: It costs too much. The best solution is single-payer national health insurance; you can’t even make a dent in the problem without a strong public option. Obama ran on a public option but came to view it as a liberal fetish rather than a way to make health care affordable to small businesses and the self-employed. He promised to bring C-Span cameras into health care negotiations but instead went behind closed doors to grandfather the insurance and pharmaceutical industries into his system. He thus gave up all hope of containing costs. It’s time Democrats admitted their mistake and embraced an alternative. As 60 percent of Americans support single-payer plans, Democrats might start the conversation there.

Trade: Economists still tout David Ricardo’s theory of comparative advantage. Ricardo was a smart guy, but he’s been gone a long time. Today comparative advantage means huge companies on an endless prowl for low wages and weak governments. In developing countries, this lifts people out of poverty but never into the middle class. In developed countries, it shrinks the middle class while enabling corporations to encroach further on democracy. Had the Trans-Pacific Partnership been debated in public rather than brokered in secret, such issues might have been addressed, perhaps even resolved.

Public corruption: In 2008 and 2016, the winning candidate’s closing argument was all about corruption. Obama’s vow to “fix Washington” was less vivid than Trump’s vow to “drain the swamp,” but it was the same promise. Sanders’ campaign boiled down to three points: Our democracy is corrupt, the middle class is dying and the reason the middle class is dying is that our democracy is corrupt. Hillary Clinton was such a weak candidate not because she was personally corrupt but because the whole system is corrupt, and she didn’t want to believe it.

Public corruption is so invisible to elites it drove two historic elections but barely drew notice from pundits. The worst is what we mislabel “soft corruption”— all the stuff that’s clearly wrong but still legal; the campaign cash, the no-bid contracts, the revolving doors and all the ethics laws that reward the subtle rather than the good. Global finance capitalism runs less on innovation than corruption. Democrats must admit it, fire every leader who won’t, and then put the issue where it belongs, at the center of the debate.

The lessons of 2016 are hard but simple: On, the power of ideas is greater than the power of money. Two, policy precedes message; first figure out what you believe, then how to tell people about it. Trump won by co-opting issues of political reform and economic justice. He didn’t steal them; they were a gift from Democrats. What would it take to get them back? Probably a revolt — for sure a debate. Leaders must turn away from their donors and their consultants and re-enter the marketplace of ideas. Any who resist must be sent packing, before time runs out.