Decision day in Georgia: But this special election won’t determine whether Democrats are doomed in the midterms

If Jon Ossoff can win a longtime GOP district, Democrats may see a blueprint. But how will they react to a loss? 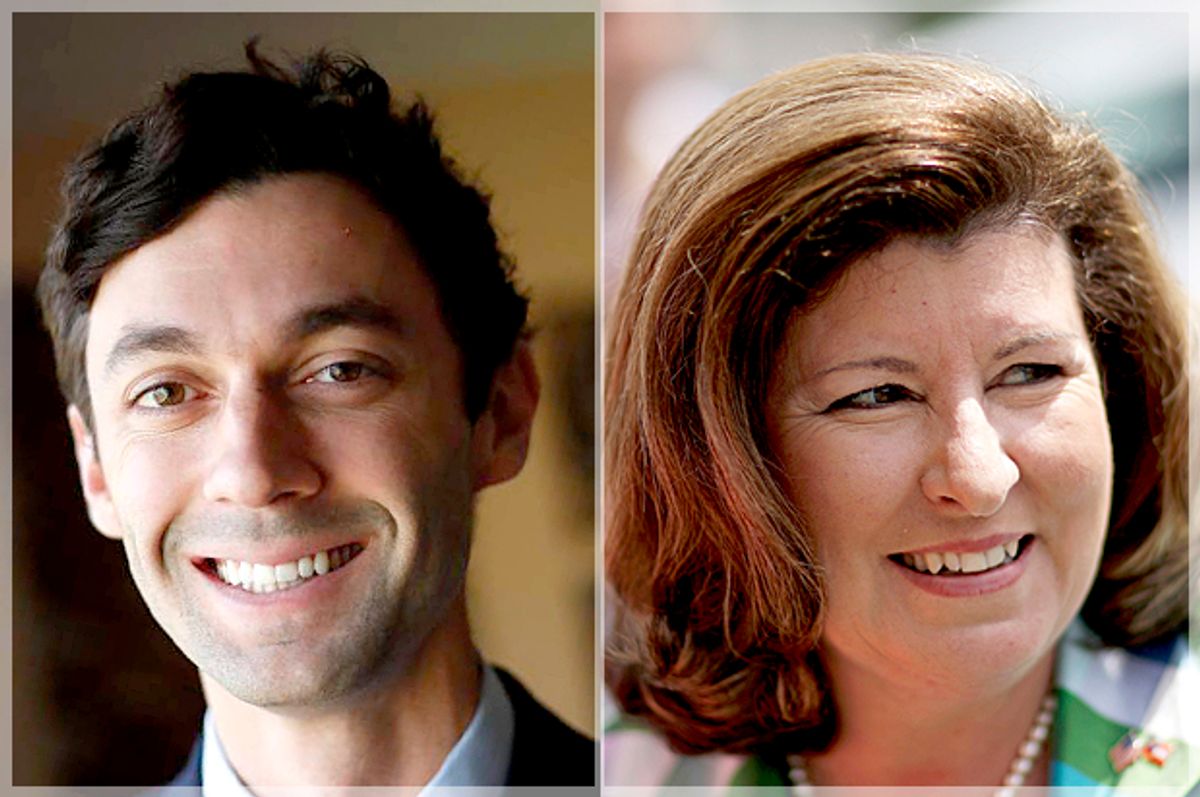 The midterm elections of 2018 are still more than 16 months away, but that won’t deter political observers from viewing the results of Tuesday's special election in Georgia's 6th Congressional District as a harbinger for Democrats’ chances of retaking a majority of seats in the House of Representatives next year. (The U.S. Senate, at least in the real world, is likely out of reach.) While it's silly to think that an off-year June election can accurately predict much of anything about the political future, the Georgia race might serve as a useful gauge for the temperature of the Democratic Party in the Trump era.

In the latest congressional race to garner outsized attention since President Donald Trump’s inauguration, Democrat Jon Ossoff and Republican Karen Handel have together spent more than $50 million in their quest to fill the seat left vacant by Health and Human Services Secretary Tom Price. If Ossoff is able to win this seat, Democrats will seek to replicate his success in the 2018 midterms. An Ossoff victory would be the first significant Democratic electoral  success since Trump took office. A loss, on the other hand — no matter how close the results — could leave many individuals in the party demoralized.

In this district in the affluent suburbs of northern Atlanta, Trump’s election has shocked many and galvanized some disaffected voters into action. A newfound community of Democratic and liberal activists has appeared in what seemed to be a Republican stronghold.

Ossoff effectively avoided Democratic opposition in his primary race and he nearly won the district's open primary on April 18, receiving a little less than half the vote. The 30-year-old former documentary filmmaker and congressional national security aide hopes to capitalize on the changing demographics of a district that has been held by Republicans for decades and once was the home of former House Speaker Newt Gingrich.

Even though Tom Price won his re-election campaign by close to 30 percentage points over token Democratic opposition last fall, Hillary Clinton came within a single percentage point of taking the district from Trump.

Atlanta has seen a population boom over the last decade. The 6th District now has the second-largest population of master’s degree holders in any in the country. The son of an Australian mother and a Jewish father, Ossoff has explicitly targeted the growing population of immigrants and college-educated millennials, and has campaigned on an endorsement from Khizr Khan, the Muslim Gold Star father who became a sensation at last summer's Democratic convention.

But even with his focus on youth and diversity, Ossoff is clearly going after moderate Republicans with nonideological rhetoric like “local accountability,” “fresh leadership” and  the importance of a balanced budget. He rarely mentions Trump and has shied away from any talk of impeaching the president. He has resisted progressive priorities such as single-payer health care, low-cost college tuition and a $15 minimum wage, sticking to a script much closer to Hillary Clinton's wing of the Democratic Party than the activist base that powered Sen. Bernie Sanders’ insurgent presidential campaign.

That hasn't stopped Ossoff's opponent, former Georgia secretary of state Karen Handel, from labeling him as “dangerously liberal” on her website or accusing him of “lying his Ossoff” about his national security credentials.

A Handel victory on Tuesday could further widen the split between warring Democratic factions. A small group of Senate Republicans is currently working behind closed doors to reach a final agreement on repealing the Affordable Care Act. A Republican win tonight would likely embolden them to embrace the embattled American Health Care Act, otherwise known as Trumpcare. Democrats, in turn, may feel less energized to challenge the bill.

The U.S. Chamber of Commerce, the National Republican Congressional Committee and President Trump himself have all worked to raise money for Handel’s campaign.

More than two-thirds of Ossoff's donations have come from small-dollar donors, according to his campaign. Handel has used that fact to attack him as an inauthentic “outsider,” arguing that much of that money is from outside the district. On the other hand, Ossoff has received money from three times as many donors within the state of Georgia as Handel has.

After a surge of early optimism, Democrats are starting to tamp down expectations, while Republicans are increasingly optimistic. According to a poll by a GOP firm released on Monday, Handel now leads Ossoff by 2 percentage points, while earlier polls showed the Democrat to be ahead by as much as 6 percentage points.

“From the start, the [Democratic Congressional Campaign Committee] understood that winning the Georgia 6th special election would be a monumental task," wrote the committee's executive director, Dan Sena, in a memo circulated with donors and friendly groups last week, as reported by Politico. "Simply put, virtually every structural advantage benefits Republicans in a special election in this traditionally conservative district.”

That said, high early voter turnout has rendered Tuesday night’s result impossible to predict. Regardless of who prevails in Alpharetta, all prognostications about next year's election based on this result should be taken with a grain of salt. As the Cook Political Report has noted, 71 congressional districts currently held by Republicans are expected to be more competitive in the 2018 midterms than Georgia’s 6th.