Not all terrorists are Muslims: As the past week should remind us, political violence is not restricted by race, religion or ideology

By any coherent standard of "terrorism," the London mosque attack — and the Alexandria shooting — clearly qualify 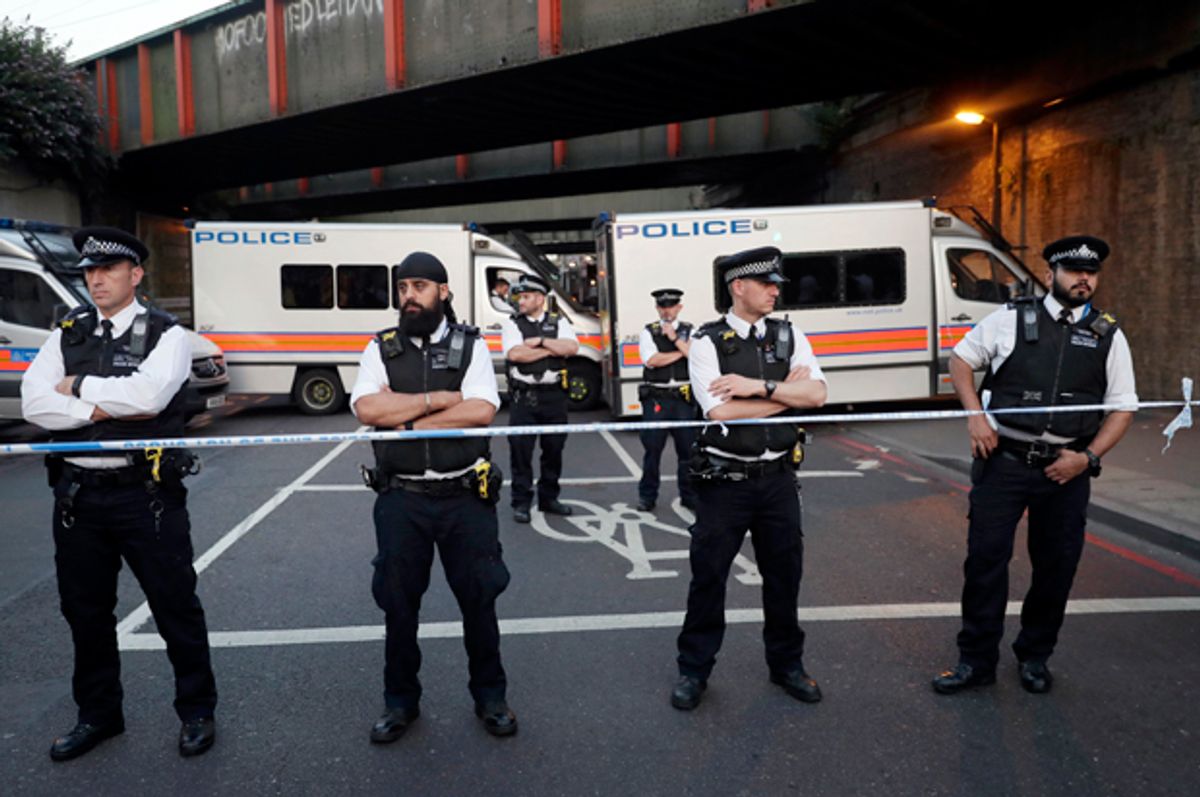 Police stand guard at a cordon on a road near Finsbury Park station after a vehicle struck pedestrians in north London, Monday, June 19, 2017. (AP/Tim Ireland)
--

Early Monday morning  a van plowed into a crowd of people leaving a mosque in the Finsbury Park district of north London, an attack that killed one person and left several others injured. The suspect is a 47-year-old man named Darren Osborne, and the London police are investigating the crime as an act of terrorism targeting Muslims.

Which is what they should be doing, of course. This attack resembles, in nearly all the important ways, other recent vehicle-based terrorist incidents in Europe, including the London Bridge attack earlier this month, the attack near Westminster Bridge in March and the devastating carnage last summer in France, when 86 people were killed by a man who drove a cargo truck through a large crowd in Nice celebrating Bastille Day. All these attacks appear to be motivated by extremist ideology: The principal difference is that the previous attacks were associated with Islamic extremism, whereas initial reports suggest that this most recent London attack was fueled by hatred toward Muslims.

Unfortunately, that minor difference means that while the London police are characterizing the Finsbury Park attack as terrorism, many individuals in the media and politics, especially in the United States, will not. President Donald Trump rushes to tweet about every attack he perceives as Islamic terrorism — even when it turns out that it's not — but has been noticeably silent about this latest London incident and the murder of a 17-year-old girl in Fairfax, Virginia, who may have been targeted because she was Muslim. As The Washington Post reported in March, terrorist attacks perpetuated by Muslims get four times more coverage than terrorist strikes committed by anyone else.

“When you ask the average American what his or her interpretation of terrorism is, it’s probably not a guy in Colorado shooting up a Planned Parenthood clinic," said Albert Ford, a program associate at the International Security and Fellows programs at New America, over the phone. "It’s going to be Khalid Sheikh Mohammed planning the bombing on 9/11."

That's a problem because, as Ford and his team found earlier this year in a report on terrorism in the United States after 9/11, other forms of terrorism besides the jihadist-initiated kind are common and deadly. Until last year when Omar Mateen killed dozens of people in an Orlando, Florida, nightclub while spouting garbled messages about ISIS and al-Qaida, right-wing terrorists had killed more people in the U.S. since 2001 than Islamic terrorists.

“Terrorism is deadly across the political spectrum, regardless of ideology," Ford said.

“We’ve been saying for a long time now that the terrorist threat, if you just count the numbers of attempted plots or attacks, like Dylann Roof’s, comes more from white supremacy than from radical Islam inside the United States," she explained. “Our point is not that it doesn’t matter, radical Islam — it does — but the government has to have a more expansive view about what terrorism looks like.”

Not all hate crimes are considered terrorism, either by New America or the Southern Poverty Law Center. Both organizations use the FBI's official definition of terrorism, which is "the unlawful use of force and violence against persons or property to intimidate or coerce a government, the civilian population, or any segment thereof, in furtherance of political or social objectives." Most hate crimes are just an expression of bigotry or generalized animosity and are not motivated by any grand plan or coherent political goals.

In the past, terrorism was more likely to be understood as an organized campaign of violence, even if it was just loosely organized, as practiced by the Weather Underground in the 1970s and various left-wing groups in Europe, Latin America and Japan. But in this century, many terrorists, especially in the United States, have become relatively self-directed.

“It’s almost impossible to distinguish Dylann Roof from some of these ISIS killers," said Beirich of the Southern Poverty Law Center, "in the sense that he went online, sucked in a bunch of white supremacist propaganda about how black people were killing whites" and reached the conclusion that "he had to do something."

Virtually the same thing happens, she said, with "people who are reading ISIS or al-Qaida propaganda and deciding on their own" to commit terrorist attacks. "They’re not that different in the mechanics of how the attacks occur.”

While left-wing violence is relatively rare these days, evidence suggests that the recent shooting at the Republican congressional baseball practice in Alexandria, Virginia, could be categorized as political terrorism, too. James Hodgkinson, the shooter, appears to have systematically targeted Republicans out of rage against their policies and principles.

Thinking of terrorism in terms of tactics and goals instead of associating it with a particular ideology — or even worse with a particular religion or ethnicity — is a critical part of understanding and preventing such attacks. Both Beirich and Ford expressed concerns about reports that the Trump administration is narrowing the focus of the Countering Violent Extremism program, an anti-terrorism initiative that began under Barack Obama, so that it addresses only Islamic extremism.

"When you put your head in the sand that way, that means you’re not providing law enforcement the tools they need, the training they need," Beirich said.

"You risk not fully dealing with a problem that is pervasive not just in jihadist circles but also in far right-wing and, in some cases, far left-wing circles as well, as we’ve learned with the shooting of Steve Scalise in Virginia," Ford said.

"Not every terrorist is the same obviously, but a significant number of the ones that we’ve looked at are troubled," Ford added. He hastened to note that the problem is complicated but said the government and other authorities need to be "fully appreciative of the fact that there are a lot of people who are really angry.”

The ideologies that motivate terrorists vary quite a bit, but what doesn't vary as much is their tendency to be obsessive, to have erratic and often violent pasts and to possess a fascination with violence. They tend to be men who have serious deficiencies in their life and they often fixate on the idea that a dramatic act of politicized violence will somehow be redemptive.

Even today, for instance, Dylann Roof continues to insist he is not sorry for killing nine people in a Charleston, South Carolina, church and he seems to view himself as a martyr for his racist cause. His rationale and self-image don't seem to differ in any meaningful way from those of terrorists who commit jihadist crimes, except that Roof committed his violent crime in the name of white supremacy instead of a radical interpretation of Islam. Indeed, one could go further: Just as most Muslims abhor terrorist acts committed in the name of their religion, most white Americans were shocked and horrified by Roof's actions.

Terrorism is a complex problem. Fighting it effectively requires a clear view of its causes and patterns. Treating jihadist terrorism as categorically different from other kinds clouds the issue far more than illuminating it and makes the task of curtailing political violence — no matter who commits it or why — only that much harder.