Don't forget about Michael Flynn: Trump's pal remains at the center of the Russia probe and looks worse all the time 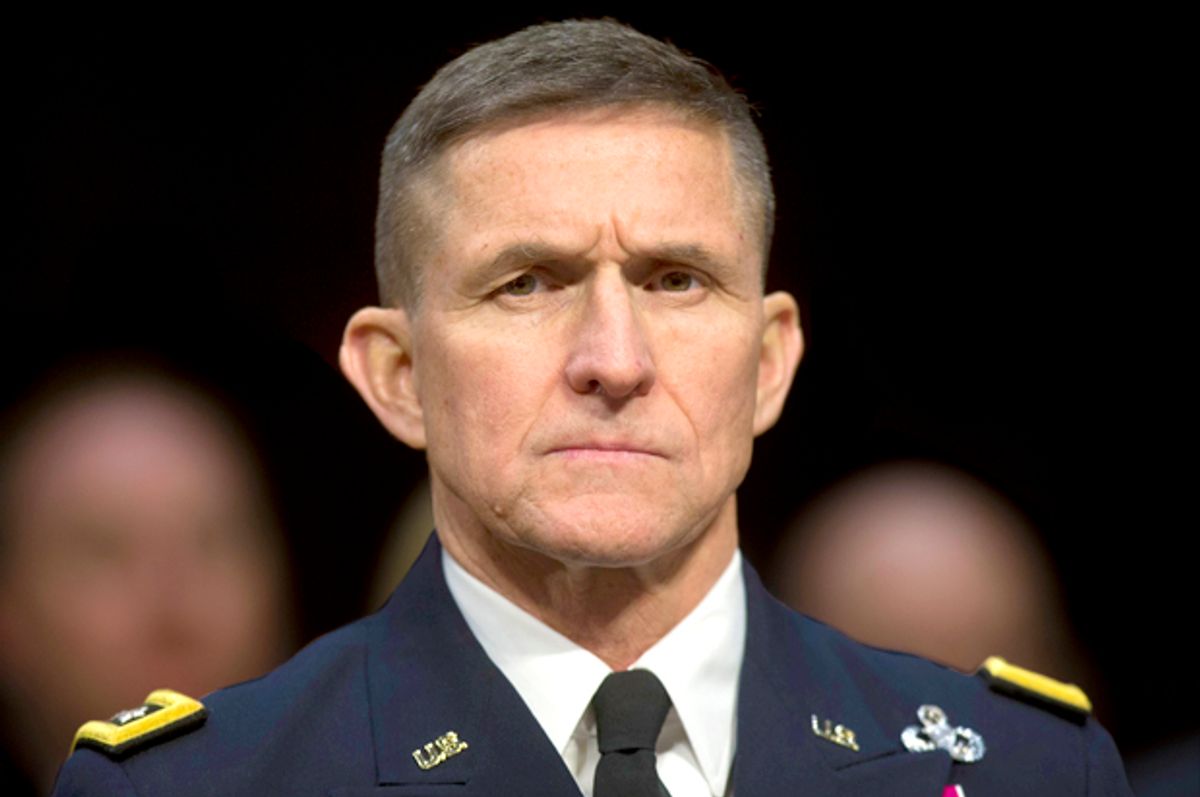 CBS News released a new poll on Tuesday focused on the public's attitudes about the Russia investigation. It contained very bad news for President Donald Trump. His overall approval rating sits at a new low of just 36 percent, a drop of 5 points since CBS News' last poll in April (and 7 points from earlier that month). He's even down 11 points among Republicans. And this drop is largely due to his handling of the Russia probe.

Trump is underwater on terrorism and the economy as well, with 50 percent of those surveyed disapproving of his handling of the former and 51 percent disapproving of the latter. But on Russia, he's at a whopping 63 percent disapproval rating. Drill down and it gets worse: Eighty one percent of those polled said they believed Trump should not stop the investigation and an amazing 64 percent said they believed that Trump is more interested in protecting his administration from investigation than protecting the United States.

So this isn't going well for our fearless leader. While his hard-core base is sticking with him, he is starting to lose Republican voters to a worrisome degree. His own culpability in this, so far, seems to be tied to his insistence that former national security adviser Michael Flynn should not be investigated for his activities with respect to Russia. He tried to get FBI Director James Comey to drop the investigation and then fired him. He was reported to have asked the director of national intelligence, Dan Coats, and the National Security Agency director, Mike Rogers, to intervene. He even held a rambling press conference not long after he fired Flynn and he said this about the whole matter:

Mike Flynn is a fine person, and I asked for his resignation. He respectfully gave it. He is a man who there was a certain amount of information given to Vice President Pence, who is with us today. And I was not happy with the way that information was given. He didn't have to do that, because what he did wasn't wrong. . . . And, you know, you can talk all you want about Russia, which was all a, you know, fake news, fabricated deal, to try and make up for the loss of the Democrats, and the press plays right into it.

Trump had known for weeks by this time that the FBI believed Flynn was subject to blackmail by the Russian government. He either didn't believe it or didn't care.

In the same press conference during which he defended Flynn, Trump made clear he was very upset by a Wall Street Journal story published that day saying the intelligence community was withholding information from him. He read a statement from the acting CIA director that denied it. This is interesting because on Tuesday night the New York Times ran a big story related to that very question.

[N]early every day for three weeks, the new C.I.A. director, Mike Pompeo, sat in the Oval Office and briefed President Trump on the nation’s most sensitive intelligence — with Mr. Flynn listening. Mr. Pompeo has not said whether C.I.A. officials left him in the dark about their views of Mr. Flynn, but one administration official said Mr. Pompeo did not share any concerns about Mr. Flynn with the president.

Of course we cannot know for sure that Pompeo never expressed to Trump any worries about Flynn. But it's astonishing no matter how you look at it. If the CIA failed to tell its new director about important questions concerning the national security adviser and allowed him to pass on classified secrets to a potentially compromised person, that's a problem. If Pompeo continued to brief someone he knew his agency believed to be subject to blackmail, that should disqualify him from the job. But if Pompeo did tell the president and was ordered to keep on briefing Flynn anyway, that's even worse. We already know that Trump disregarded the warnings from Acting Attorney General Sally Yates because he believed she was a Democratic stooge. But if he did the same with his own handpicked CIA director, he's even more of a rogue president than we thought.

If there's one thing clear by now it's that Donald Trump demands loyalty from the people around him, and when he doesn't get it, he gets very upset. But he has rarely shown such loyalty in return. For some reason he has shown tremendous loyalty to Michael Flynn and the reason for that has to be one of the major lines of inquiry in the investigation of Flynn's activities.

Flynn's story gets crazier by the day. This week we've seen new reporting that shows his being in involved in even more nefarious business deals than we knew before. There was a jaw-dropping article by Jeff Stein of Newsweek reporting that Flynn tried to broker a previously overlooked $100 million deal between Russia and Saudi Arabia to build nuclear power plants in the Middle East. That's right; they thought it was a good idea to create nuclear material in the middle of a violent, sectarian religious war zone. What could go wrong?

It's a complicated deal involving some of Flynn's business associates as well as some ex-military types and others who apparently saw it as a way to form a Middle East security perimeter manned by the Russians, the Europeans and the Saudis, while isolating Iran — and making huge profits. It's all very byzantine, and the Obama administration was opposed to any version of it for good reason.

On Tuesday Reuters reported that the FBI is investigating the co-founder of Flynn's lobbying company, a man named Bijan Kian, who seems to have aroused the agency's interest over his high-dollar dealings with certain Turkish and Russian businessmen. It's unclear if this is a new direction for the investigation or simply one that follows up on Flynn's previously reported activities.

Meanwhile, Justice Department special counsel Robert Mueller is continuing to beef up his team. He has added the Russian-speaking Elizabeth Prelogar, a former law clerk to Justices Ruth Bader Ginsburg and Elena Kagan, to his team From another Reuters report we learn that Andrew Weissmann, former chief of the Justice Department's criminal fraud section and another recent addition to Mueller's team, has the Trump people concerned because he's known for his skills at encouraging people to flip on their superiors, friends and colleagues.

Weissmann may not be required to use his expertise on Flynn. According to speculation by two Democratic members of the Senate Judiciary Committee, Richard Blumenthal, D-Conn., and Sheldon Whitehouse, D-R.I., it looks very much as if Flynn is already cooperating with the FBI. Stay tuned.