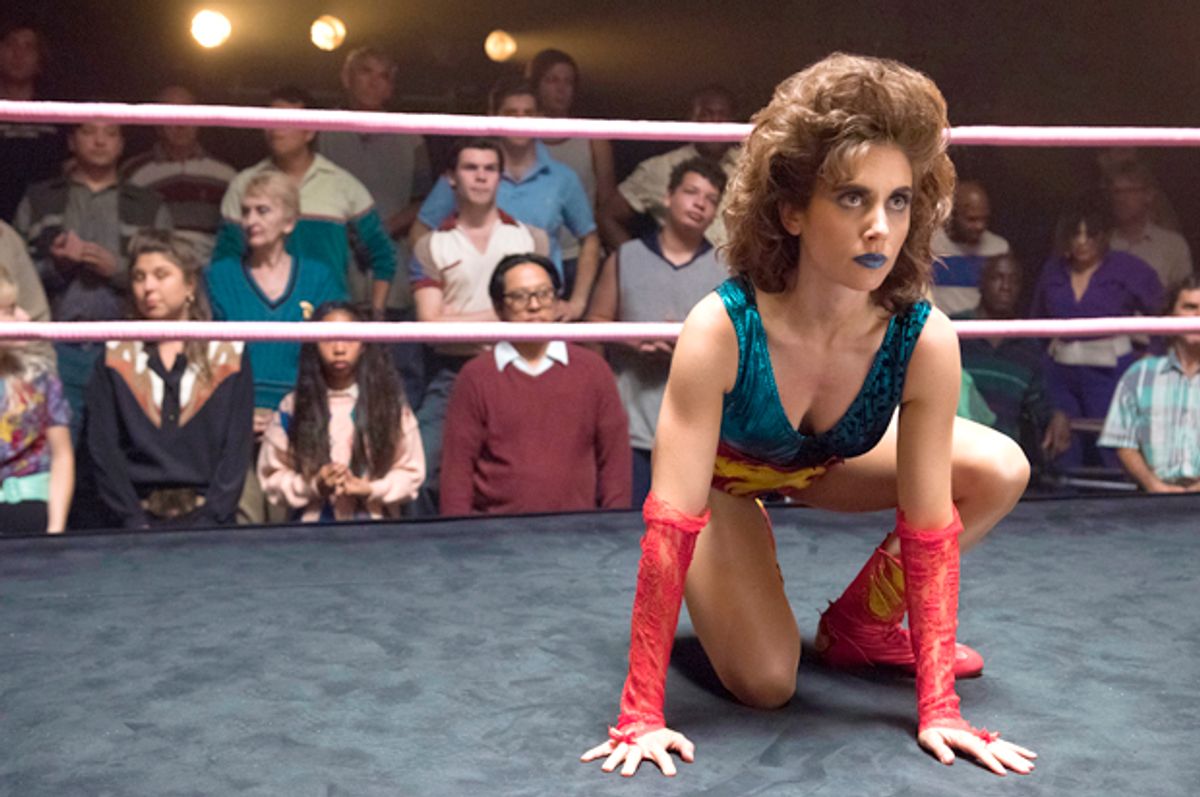 When the original version of “Gorgeous Ladies of Wrestling” sneaked onto the schedule in the mid-1980s, I watched it less out of joy than as a secretive act of disobedience. These women weren’t just slamming one another around the ring, they were embracing their physical strength, emphasizing their fortitude and agility with wild eye shadow and glitter. “G.L.O.W.” wrestlers also played with the longstanding wrestling tradition of embodying stereotypes. Two that made me cringe the most were Palestina, a Middle Eastern caricature, and Manna the Headhunter, whose face paint resembled racist drawings.

Those characters and many others made the syndicated wrestling series not just naughty but downright terrible. They also made watching “G.L.O.W.,” which aired from 1986 until 1990, a mischievous act for “good girls.” By that era’s standards, “good girls” didn’t wear loud, tight clothing or gaudy makeup. They didn’t yell or become physical. But admit it, recovering good girls: Didn’t you want to, at least some of the time?

Netflix’s scripted half hour “GLOW,” which debuts on Friday, is a co-creation of Liz Flahive (whose producing credits include “Nurse Jackie” and “Homeland”) and Carly Mensch, who worked on “Orange Is the New Black” with fellow executive producers Jenji Kohan and Tara Herrmann. “Orange,” “Nurse Jackie” and “Homeland” are all driven by female characters who defy traditional strict moral definitions and grope their way through life’s gray areas.

Wrestling, however, operates on a binary type of morality system, with whole franchises built around fictionalized rivalries pitting good against evil, "faces" versus "heels." Capitalizing on that simple structure makes professional wrestling one of the most abiding entertainment forms in American culture, one whereby viewers accept that the bouts are fake but the physical feats are real.

And this understanding enables the writers of “GLOW” to traverse compelling territory showcasing the lives of many types of women, from athletic stalwarts to rangy punks and whatever Sheila the She Wolf (Gayle Rankin) purports to be.

The winning spirit of “GLOW” rests in its focus on all the ways these characters do not neatly fit into the either/or paradigm, especially Ruth Wilder (Alison Brie), an unemployed actress who's given a shot at greatness in the ring. But she’s only able to create this luck because she screws up — big time.

It must be said that this role was forged for Brie, the current titleholder of television’s "good girl" trophy because of her roles on “Community” and “Mad Men.” Brie carries herself like a plain Jane, the girl next door. As Ruth, she leads with a sweet nervous smile and flyover-state politeness that do no favors for her character in casting calls. This includes when Ruth auditions for GLOW's sad sack of a director Sam Sylvia (Marc Maron), who can’t decide whether he thinks she’s hot or if he never wants to see her again.

But while Ruth’s demeanor announces she is a good girl, life has marked her as a heel. At best, she’s ignored; in her tougher moments, she’s attacked. Joining GLOW gives her an excuse to start fighting back.

Elsewhere Ruth’s best friend Debbie Eagan (Betty Gilpin) appears to be soaring through life. Following a stint with a popular soap opera that gained her fame, Debbie stepped away to take care of her husband Mark (Rich Summer) and have a baby. She’s done everything she’s supposed to do and is living the life that rewards those choices.

That is, until a game-changing discovery pile-drives Debbie’s pristine reality into the dirt, eventually emboldening her to leap into the ring.

“GLOW” may be inspired by the female wrestling franchise, but its narrative draws little from its real story (joyfully recounted in an acclaimed 2012 documentary that’s also streaming on Netflix). Instead, the writers use Debbie, Ruth and misfits like Sheila and the outfit’s soft-spoken giant Carmen (Britney Young) to show the risk and reward that comes with defying expectations.

The fictional “GLOW” also shuffles through the fraught gender dynamics of a wrestling brand that was founded and cast by men like Sam Sylvia, a B-movie director obviously based on founder Matt Cimber but realized as the kind of grumpy, disheveled, golden-hearted cynic that’s pure Maron. And Sam is the ideal counterweight to Chris Lowell’s preposterously wealthy producer, who ends up making GLOW simultaneously marketable and more deplorable than previously imagined by encouraging the women to emphasize stereotypes.

Hence, the original lineup includes Beirut, a Middle Eastern terrorist played by an Indian med student (Sunita Mani) and the GLOW personality known as Welfare Queen (Kia Stevens, the only cast member with pro-wrestling experience). The series doesn’t wholeheartedly embrace these troubling images but it doesn’t dismiss them either. One episode actually puts them to tremendous use by having Stevens and Sydelle Noel’s Cherry Bang take on physical manifestations of racist ideology, yielding one of the series finest laugh-out-loud moments.

As the title implies, “GLOW” wins top ranking by serving up a sensational story that’s brilliant for summer, but timeless as well. Wrestling may be fake, but the relationships these characters forge throughout the story ring true. Indeed, the real strength of “GLOW” isn’t in its emphasis on competition but in its exploration of the resiliency of female friendships, even those that fall into ruin.

A large reason for that — one that the series seizes upon and raises over its head in triumph — is because wrestling helps these women remember and celebrate their own power. “It’s like I’m back in my body,” a character says near the end of the first season.  “I’m like, using it for me and I feel like a goddamn superhero.” That just feels good.