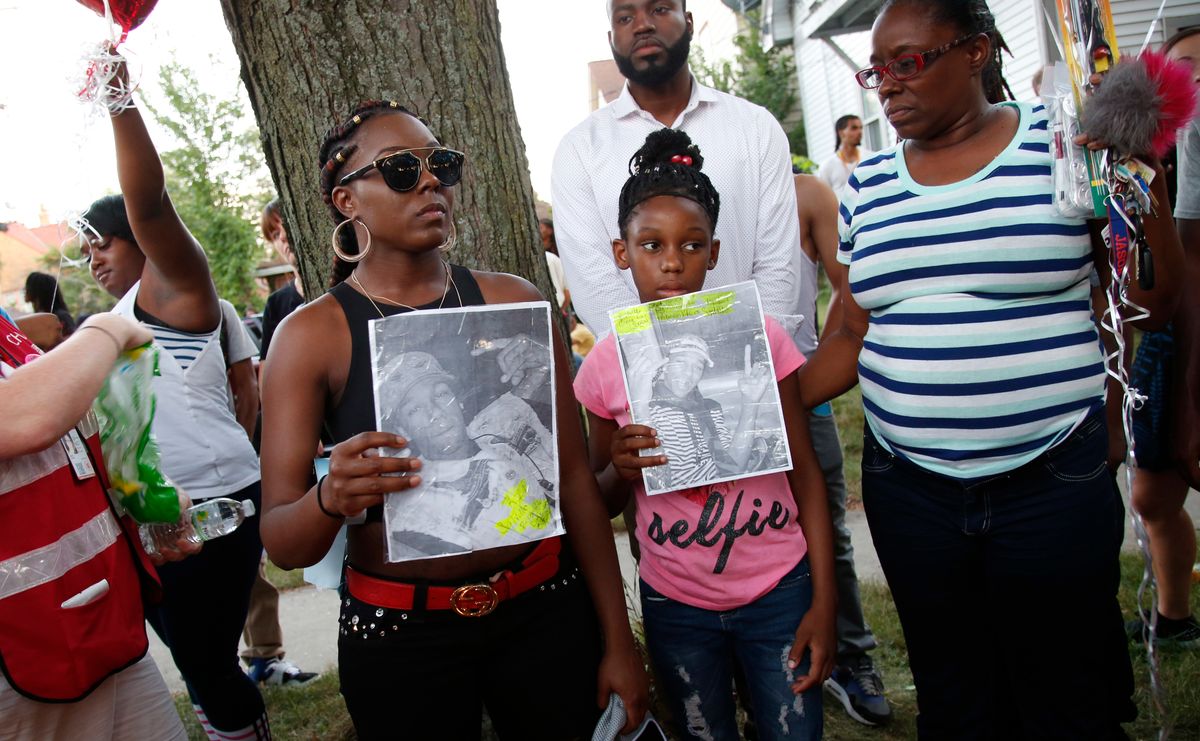 Family members of Sylville Smith gather where he was shot and killed by Milwaukee police in Milwaukee, Sunday, Aug. 14, 2016. Police in Milwaukee say a black man whose killing by police touched off arson and rock-throwing was shot by a black officer after turning toward him with a gun in his hand. Wisconsin's governor, meanwhile, has put the National Guard on standby in case of more violence Sunday night. (AP Photo/Jeffrey Phelps) (AP)
--

On Wednesday, after fewer than ten hours of deliberation, a jury acquitted a Milwaukee police officer for the fatal shooting of 23-year-old Sylville K. Smith, according to a report from the New York Times. In the wake of the August 2016 shooting, protests erupted in the north side neighborhoods of Milwaukee, Wisconsin — protests that would ultimately turn violent and last for two days.

Milwaukee police officer Dominique Heaggan-Brown was charged with first-degree reckless homicide, for which he faced up to 60 years in prison. He was fired in October on unrelated sexual assault charges, and was officially charged for the shooting in December 2016, according to the Times.

Heaggan-Brown's acquittal arrives at a political moment when communities across the country have grown weary over the lack of accountability for law enforcement officers.

The tragic ordeal that led to Smith's death began in a residential neighborhood and lasted roughly 12 seconds. Initially, police approached Smith because they suspected he was involved in a drug deal. Smith then fled, as the body camera footage shows, while in possession of a gun. While attempting to hop over a chain-link fence, Smith tossed the weapon over, and was shot by Heaggan-Brown. After Smith fell to the ground, the officer fired a second shot into Smith's chest — a mortal wound that an official from Milwaukee County's medical examiners office said was "not survivable." Both the officer and the suspect were African-American. Prosecutors argued the first shot, which hit Smith in his right arm, was "reasonable," but that the second shot was not.

The video showed that at the time the officer fired a second shot, Mr. Smith no longer had a gun and was on the ground — “hands up, with no place to go,” said the prosecutor, John Chisholm.

Officer Heaggan-Brown had no reason to fear for his life once Mr. Smith was unarmed, wounded and unable to run away, Mr. Chisholm said during his closing arguments on Tuesday. “Shooting someone point blank when he’s on the ground is utter disregard for life,” he said.

Jonathan Smith, Heaggan-Brown's lawyer, argued that the officer had only been acting as he was trained to do so. He told jurors that officers had been taught a "one-plus rule," meaning that when a suspect has one firearm they may have another, according to the Times. "A gunfight doesn’t end until the threat is stopped," Smith said, arguing that officers were trained to use deadly force until no further threat exists.

Prosecutors noted that Heaggan-Brown went out to a bar just one night after shooting Smith. At the bar he drank heavily and, speaking to a stranger, "bragged about being able to do whatever" he wanted "without repercussions" He then sexually assaulted the stranger, dropped him off at a hospital, and contacted one of his superiors to cover up his misdeeds, according to the Times.

Last week Jeronimo Yanez, a police officer in Minnesota, was acquitted of all charges in the killing of Philando Castile. Dashcam footage of the routine traffic stop that led to Castile's death was made available on Tuesday.