Her indictment signifies a dangerous shift toward criminalizing protesters 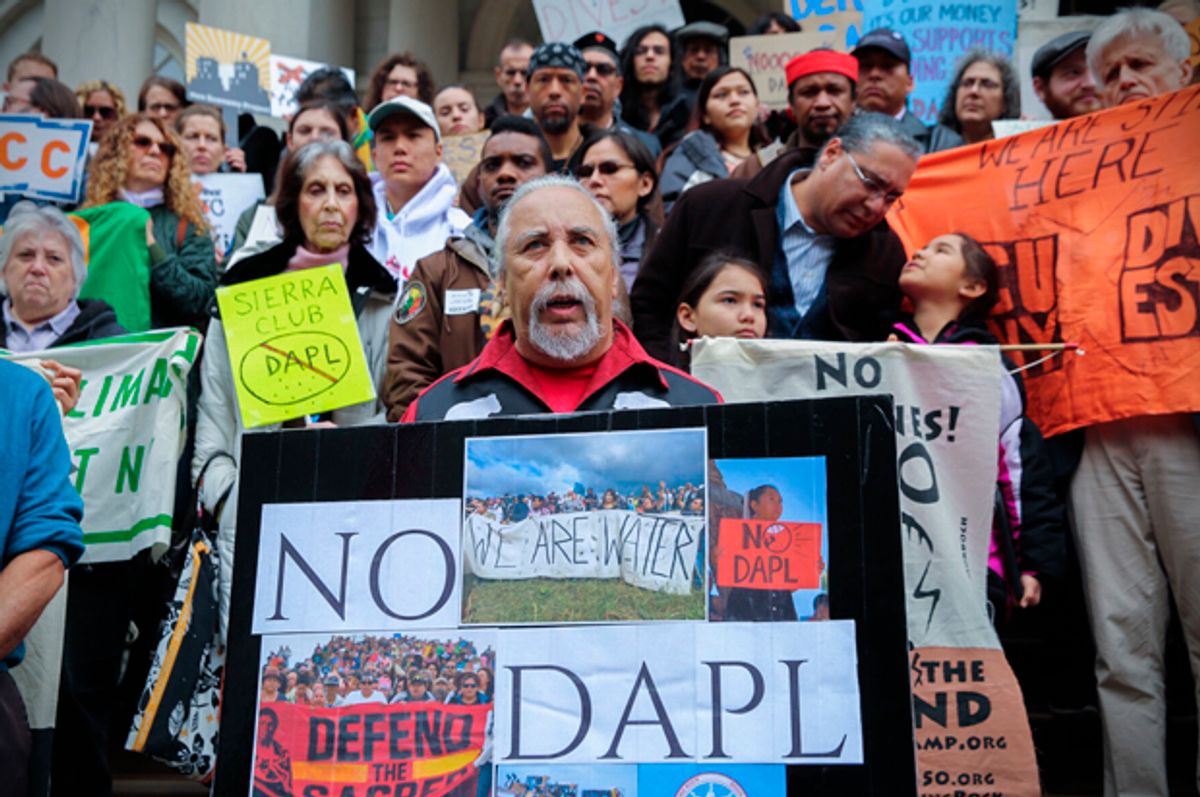 In an escalation of the criminalization of protesters, an indigenous woman is facing several federal charges for her involvement in the Standing Rock protests last fall. Red Fawn Fallis, 38, a member of the Oglala Sioux tribe, has been indicted on three federal charges, including possession of a firearm by a convicted felon, discharge of a firearm and federal civil disorder — a charge that is rarely pursued.

“Nobody I’ve worked with previously has ever seen that charge,” she said. “It comes from a law that is usually only invoked with the federal government decides to prosecute people involved in resistance.”

The federal charges against Fallis stem from a massive raid on the Front Line Camp north of the Standing Rock Sioux reservation on Oct. 27, 2016 that resulted in a clash between peaceful indigenous activists and heavily armed police. During the raid, officers fired tear gas, concussion grenades, rubber bullets and bean bag pellets against the unarmed water protectors, causing a multitude of injuries. Human rights groups like the United Nations have since condemned these violent police actions against water protectors and said that they are “contrary to the U.N. Guiding Principles on Business and Human Rights.”

As law enforcement officers continued attacking water protectors and activists, four officers arrested Fallis and tackled her to the ground. Two gunshots went off beside her as she struggled. Local authorities contend that Fallis possessed a gun at the time and fired three gunshots at police during the raid. A statement from the Pennington County Sheriff’s Department says Fallis was arrested for “being an instigator” and “acting disorderly.” Upon her arrest, Fallis was initially charged with attempted murder. That charge has since been dropped by a state judge.

Fallis was not the only indigenous activist arrested for her participation in the Standing Rock protests last year. Authorities have arrested hundreds of people since the protests against the pipeline began, and about 141 people alone were arrested at the October 27 raid. Since these mass arrests, about 100 were indicted under felony charges by state prosecutors. Several reports have also surfaced about the crowded conditions of jail cells housing the activists.

The charges Fallis faces could set a dangerous precedent on the criminalization of protests, as law enforcement may feel emboldened to arrest more protesters. Reports from The Intercept reveal a coordinated effort between private security firm TigerSwan, law enforcement and agents from the FBI, the Department of Homeland Secruity, the Department of Justice, the Marshals Service and the Bureau of Indian Affairs to mitigate Standing Rock protests through surveillance and counterterrorism measures. Since November, more than 30 anti-protest bills have been introduced in state legislatures across the country, according to the ACLU, reflecting even more efforts to stifle social movements by directly targeting protesters. Several protesters who demonstrated against President Trump's inauguration are also facing hefty charges in court.

Fallis is currently awaiting her next court date on July 17 in Bismarck, North Dakota, and her family and supporters have started an Indiegogo campaign to raise funds to pay for the legal fees. The campaign is trying to raise $500,000 for further legal fees, and has collected about $15,000 so far.

Many Native American activists have disputed the charges against Fallis, arguing that she was not holding a gun and that she is innocent. According to reports from The Guardian, Fallis was a respected figure in the Sacred Stone Camp and a passionate activist in the fight against construction of the pipeline. Friends and supporters said Fallis would often provide medical attention to protectors during encounters with police.

“Anyone at the camp that needs help, she’s always been the one to stand up,” Mia Stevens, 22, a member of the International Indigenous Youth Council and longtime friend of Fallis, told The Guardian. “She wouldn’t do nothing like that. Where is the proof?”