Trump was already in the film, but after Election Day the punishing jury award against Gawker took on new meaning 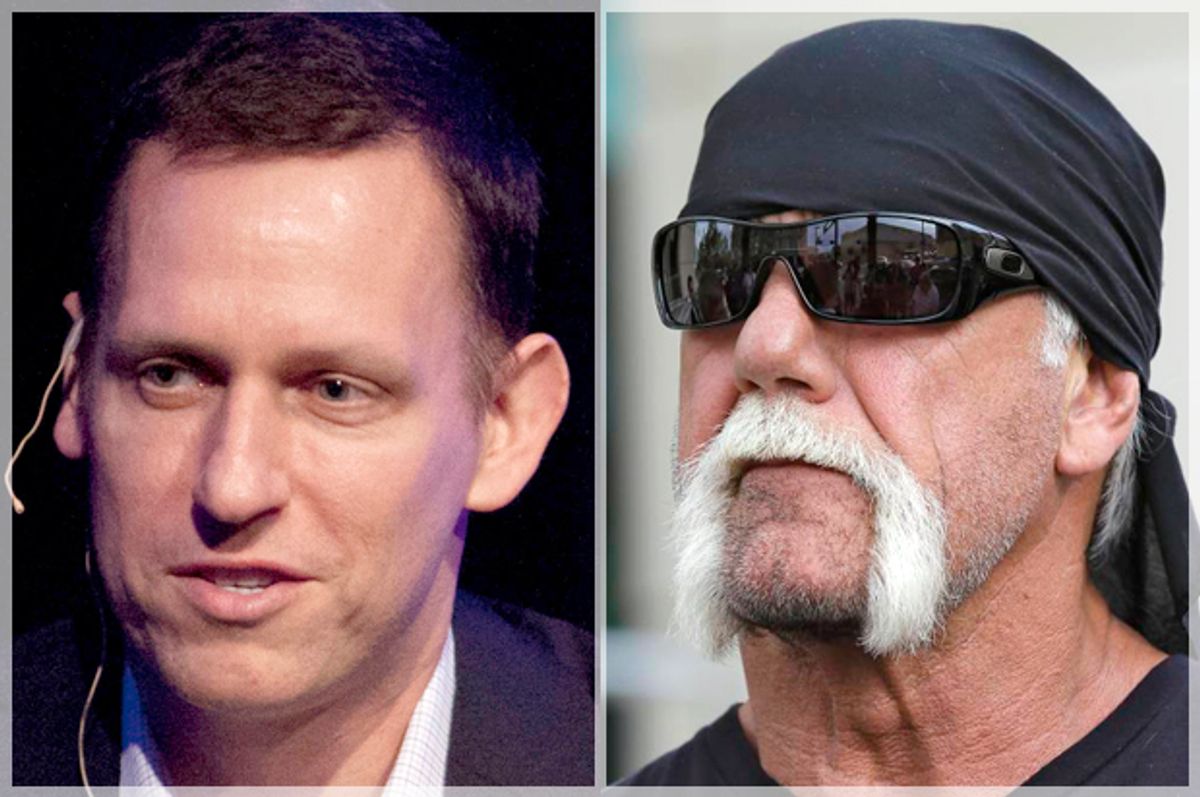 Talk about walking into a house on fire. When director Brian Knappenberger set out to document the legal battle between Terry Gene Bollea (aka Hulk Hogan) and the snarky Gawker media website, which he was suing for posting a surreptitiously filmed sex tape in which he appeared, little did he know that the case was an early indicator of a vast sea change in the American political landscape. Was it just a coincidence that a jury of Floridian citizens rallied around a bloated, orange so-called man of the people when it decided to severely punish the slick big-city media types with a $140 million penalty?

“I definitely think there are big parallels between what was happening in that courtroom in Florida and the bizarre election cycle we just endured,” Knappenberger says.

“Nobody Speak,” which comes out June 23 in theaters and on Netflix, focuses on an imperiled freedom of the press when the media is under siege and threatened because billionaires can finance legal campaigns, as venture capitalist Peter Thiel did with Bollea.

Salon caught up with Knappenberger and asked him to exercise his freedom to speak about a film that should send shudders through everyone who believes in the foundation that underlies the old red, white and blue.

How did you come to making “Nobody Speak”?

To me the Hogan-Gawker trial by itself had a really compelling tension between privacy and the first amendment. But the $140 million verdict, combined with the revelation that Peter Thiel was secretly funding the case, made it something very different. It became about how big money can be leveraged to silence journalism it doesn’t like. That is when I realized I needed to dig deeper, especially during a bizarre election cycle in which hatred of “the media” played a central role.

What’s been the primary response from festival audiences?

The response from festival audiences has been incredible. Audiences have packed in to see this film and almost without exception have risen to their feet with standing ovations when the credits roll. It is amazing. But passions are also high at the post-screening discussions — in particular Gawker, Peter Thiel and, of course, Trump spark some raw emotions. People across the country are upset and, if nothing else, this film walks right into that fire.

Has there been a primary criticism?

There are usually a handful of people who see this film and still say that Gawker's actions justify the death sentence they received. Hatred of the press, all press, runs high. But consider the flood of so-called fake news we’ve seen over the last year, which has included false stories that lead a man to shoot up a pizza parlor, or a figure like Alex Jones who has repeatedly insisted that the Sandy Hook shootings were a "false flag" operation. In that context Gawker is hardly the “singularly sociopathic bully” Peter Thiel made them out to be. As the saying goes, if you don’t believe in free speech for speech you don’t like, you don’t believe in it at all.

Explain your process of responding to changes while you were making the film. Are twists a gift, a challenge . . . both for a documentary filmmaker?

The big turn in this film was the most dramatic I’ve experienced as a filmmaker; the election of Donald J. Trump as president of the United States. Trump was always in the film since there seemed to be a direct connection between the anti-press sentiment of the Hogan-Gawker trial and Trump’s “open up libel laws” rhetoric during the campaign. And that was even before Thiel spoke at the RNC, gave money to Trump’s bid and became part of his transition team.

But as a filmmaker there was a big difference between thinking of Trump as a cautionary tale and having him actually become president of the United States. I’ll never forget screening a rough cut of this film the day after the 2016 election; it felt much different than the film I thought I was making 24 hours before.

How fitting or ironic is it that Nick Denton, a smut peddler (my opinion!), is the ostensible symbol of the last stand for a free press?

There is an element of the People v. Larry Flynt in this story. One of the reasons I found the trial so compelling is that it wasn’t an easy case. I picked it because it was hard, because it was on the fringes of acceptability. The most interesting and important speech cases aren’t usually the cleanest. But it becomes something different when you factor in the essentially unlimited supply of secret money fueling Hogan’s side and imagine very wealthy people applying Thiel’s tactics to other news sources you love.

What would stop that? Gawker actually broke some important stories. Right now all watchdog journalism is struggling while inequality in our society is staggering. It is too easy to leverage great wealth against inconvenient voices who question that power.

The internet created an environment where new voices could be heard, where protest groups could more easily organize and where information could be spread unfiltered to inform the public. That caused well-deserved fissures in a media world that had become too corporatized and cozy to power. But what we’re seeing now is the dark side, big money co-opting once revolutionary tools, large-scale surveillance and a deluge of misinformation that arguably leaves the public less informed.

The old journalism model is dead and a new one is struggling to be born, unsteady in a hailstorm of special interests and newly freed political money. This is particularly true when it comes to communities across the United States who have lost their local newspapers and with them an important check on power. But we can’t sit around waiting for some new model to emerge. Ready or not, this is a moment of reckoning. Watchdog journalism needs to step up to the challenge; this is why it exists.

Has Peter Thiel responded to the film? Did he decline to be interviewed?

Peter Thiel hasn't responded to the film and he declined our repeated requests for an interview. But I really wish he did talk to us, I would have loved to put his perspective in the film. The best we got was a response to one of our questions at the National Press Club, one of the few places Thiel has spoken about his behind-the-scenes participation in the case.