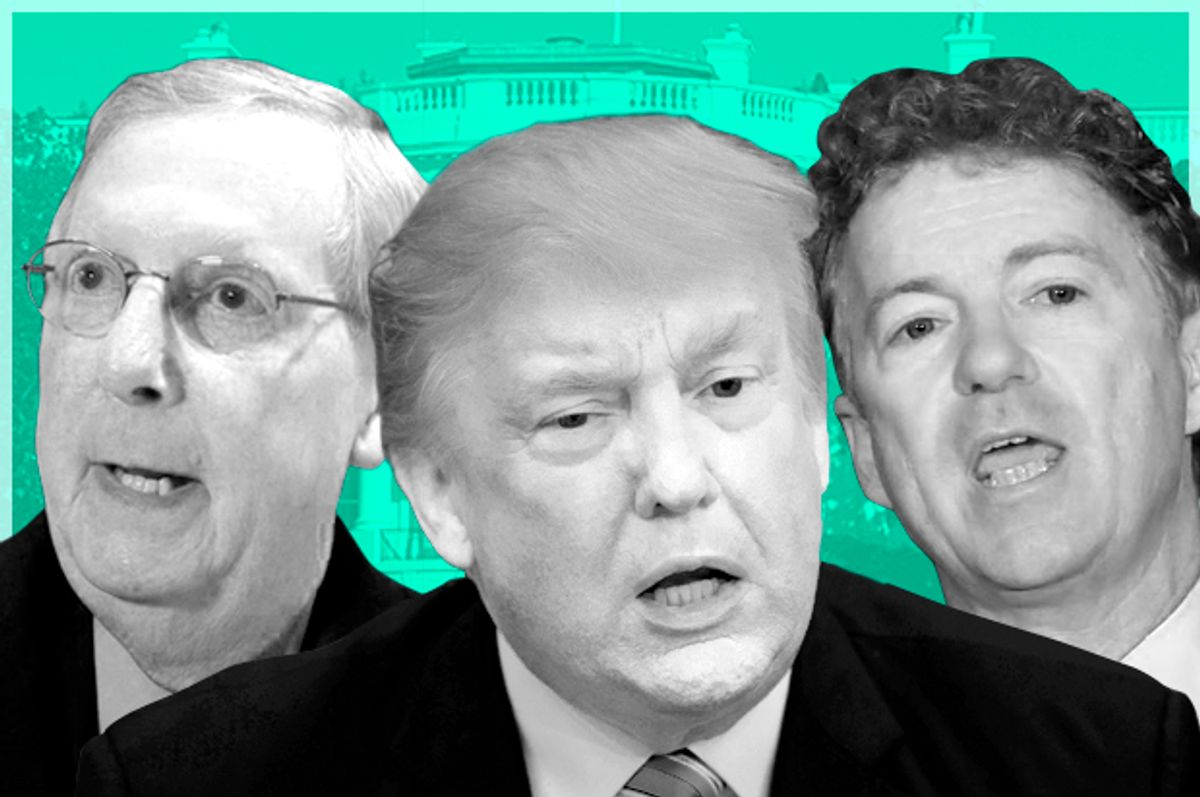 The Senate Republicans’ secretive health care bill finally became public on Thursday. But only hours after its much-anticipated release, four prominent Senate Republicans came out against the version of the bill as introduced by Senate Majority Leader Mitch McConnell.

Republican Senators Rand Paul of Kentucky, Ted Cruz of Texas, Ron Johnson of Wisconsin and Mike Lee of Utah released a statement indicating that their immediate opposition to McConnell’s so-called Better Care Act is due to the fact that it does not go far enough to completely repeal Obamacare. While the Republican plan does little to actually repeal Obamacare -- which has received near universal support from all corners of the industry -- it does repeal the taxes that help pay for Obamacare by snatching access to health insurance from low-income and poor Americans through severe cuts to Medicaid.

“There are provisions in this draft that represent an improvement to our current health care system but it does not appear this draft as written will accomplish the most important promise that we made to Americans: to repeal Obamacare and lower their health care costs,” the conservatives wrote in their joint statement. “Currently, for a variety of reasons, we are not ready to vote for this bill, but we are open to negotiation and obtaining more information before it is brought to the floor.”

Without the support of these four Republicans, McConnell’s push to pass the Senate’s version of Trumpcare before the Fourth of July is in jeopardy. Senate Republicans hold only a 52-seat majority, meaning they cannot afford to lose more than two votes under special budget rules that allow them to gut Obamacare without facing a Democratic filibuster.

“We’re certainly not able to do as much as some of us would like,” Mississippi conservative Republican Sen. Roger Wicker lamented to reporters on Capitol Hill on Thursday. “Clearly, a lot of us would like to do more if we had the votes. We’re dealing with the reality of getting to 50.”

Utah Republican Sen. Mike Lee, a member of the small group of Senate Republicans who crafted the bill, complained in a Facebook post earlier this week: “I haven’t seen the bill.” He announced his opposition to the bill shortly after its release on Thursday.

When Lisa Murkowski of Alaska was asked if she had seen any text of the bill before its release this morning, she replied: "I am not a reporter, and I am not a lobbyist, so I've seen nothing."

Sen. Dean Heller of Nevada, who is up for reelection in 2018 and who hails from a state where a large portion of the populace receives coverage from Medicaid, said he has “serious concerns about the bill’s impact on the Nevadans who depend on Medicaid."

In a statement, he reiterated, “As I have consistently stated, if the bill is good for Nevada, I’ll vote for it and if it’s not – I won’t." As he explained, “I want to make sure the rug is not pulled out from under Nevada or the more than 200,000 Nevadans who received insurance for the first time under Medicaid expansion.”

A spokesperson for Sen. Susan Collins of Maine said that "she has a number of concerns and will be particularly interested in examining the forthcoming CBO analysis on the impact on insurance coverage, the effect on insurance premiums, and the changes to the Medicaid program."

Under the Republican plan, Obamacare’s Medicaid expansion is terminated as of 2020 and cuts increase further in 2025 -- the year many baby boomers turn 80. Medicaid pays for 64 percent of all nursing home care in the country.

After the bill was released on Thursday, Ted Cruz complained that “this current draft doesn’t get the job done [nor does] nearly enough to lower the cost of premiums.”

Yet rather than make premiums more affordable, the Senate repeal bill will increase costs by more than $5,000 annually for the average 60-year-old making $42,000 a year. That is because under Senate Republicans’ plan health insurance affordability will vary with age, forcing older people to pay as much as 16.2 percent of their income towards a high-deductible plan.

Opposition to the House’s version of the Republican health care plan, the American Health Care Act, has nearly doubled among Republican voters since the end of April.

Yet despite immediate opposition from the Republican base, Vice President Mike Pence state on Thursday that he and President Trump "are determined before this summer is out to keep our promise to the American people to repeal and replace Obamacare and give the American people the kind of world-class health care that they deserve.”

For his part, Rand Paul introduced legislation to slow down Republican plans to ram through any repeal plan on Thursday. Just hours before McConnell posted the Senate GOP's draft legislation online, Paul reintroduced his "Read the Bills" measure requiring that all bills or amendments be filed for at least one day for every 20 pages before they can be brought up on the floor.

"Legislation is too often shoved through Congress without proper hearings, amendments, or debate, as the secrecy surrounding the Senate’s health care bill and the pressure to vote for it with little time to fully evaluate the proposal once again remind us,” he said in a statement.
Conservative voices in right-wing media were also quick to bash the Senate GOP's plan on Thursday.
Republican leaders in the Senate are eyeing a floor showdown next week after the Congressional Budget Office scores their plan’s affect on federal spending and coverage.