It's time for the critical reappraisal of Def Leppard, whether you like it or not

More than a mullet-bestrewn cheese machine, it's a true musical player with a legacy that speaks for itself 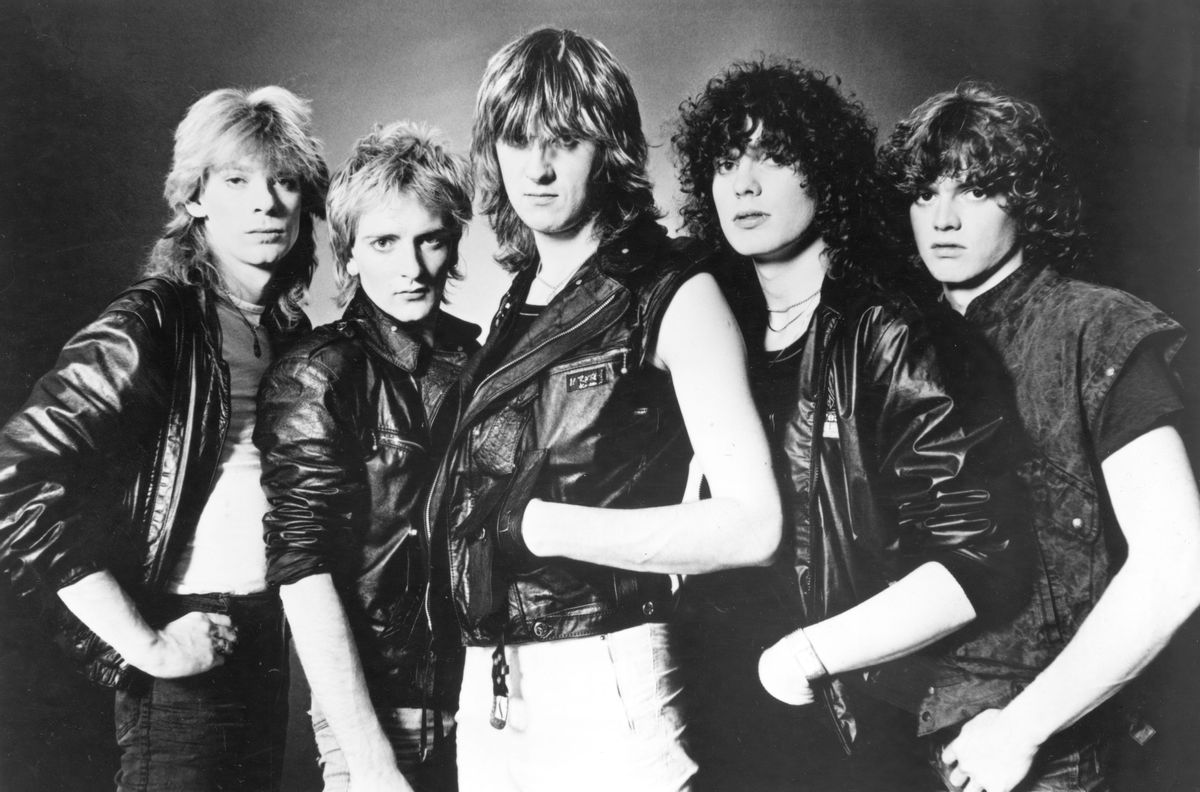 One of the more low-key milestones, however, is Def Leppard's 40th birthday. In fact, earlier this year, guitarist Phil Collen revealed in a radio interview that the band isn't planning on commemorating the moment in any way whatsoever.

The lack of fanfare is surprising because Def Leppard never does anything halfway. On Aug. 4, the band is unveiling an extensive reissue of its 1987 opus "Hysteria," the 12-time platinum record that spawned six Top 20 singles, including "Pour Some Sugar On Me," "Love Bites" and "Armageddon It." Although the usual basic options are available — including a remastered single CD or a double vinyl set— Def Leppard is also offering up a whopping five-CD, two-DVD super deluxe edition with four books, live concert audio and video and a documentary. That's a lotta Leppard.

The reissue is an appropriately grandiose gesture for a band that's never been shy about its larger-than-life ambitions. "We wanted to be the biggest band in the world," frontman Joe Elliott told Mojo in 2007. "Our blueprint was to be AC/DC with Queen harmonies." Incredibly, Def Leppard fulfilled those lofty sonic aspirations (and then some) by forging a revolutionary three-album studio partnership in the '80s with producer Robert John "Mutt" Lange.

The cowbell on the chorus of "Photograph" doesn't really need to be there, but it adds irresistible perkiness. The choppy synthesizers (courtesy of Thomas Dolby) introducing "Die Hard the Hunter" are action-movie caliber. "Pour Some Sugar on Me" is exponentially more epic because of the echoing effects slathered on every, single track.

To this day, Def Leppard's records sound amazing, especially when cranked up in the car on sticky summer days. Naturally, this glossy commercial veneer rubbed some people the wrong way. Critic Robert Christgau graded 1983's "Pyromania" a C and described "Hysteria" as "impeccable pop metal of no discernible content, it will inspire active interest only in AOR programmers and the several million addicts of the genre. In short, it's product — but as product, significant, because it's product for the CD age."

In early '80s England, where the band was initially championed as part of the New Wave of British Heavy Metal, the backlash was also fierce and quick — especially because American audiences embraced Def Leppard wholeheartedly, starting with the band's second record, 1981's power-riffing "High 'n' Dry." "While Leppard continue to 'wow out' crowds in the U.S., they still seem to be at the butt of abuse as far as certain British media and fans are concerned," journalist Pete Makowski wrote in the Feb. 6, 1982, issue of the magazine Sounds.

He added, "While groups like Saxon and Iron Maiden seem to be able to travel the world and lead a grandiose lifestyle and still retain that dubious street credibility factor, anything that Leppard do is regarded as being pompous and the general consensus of opinion from the average anglophile headbanger seems to be that they are egotistical popstars who sold their souls to the American rock and roll machine."

On some level, this perception lingers. Much like fellow New Wave of British Heavy Metal band Iron Maiden, Def Leppard still routinely tours huge venues in the U.S. (although Bruce Dickinson and Co. have more metal cred and reverence than Elliott and crew). This is certainly a byproduct of the idea that "authentic" rock 'n' roll is constructed and executed in a certain way. Studio experimentation isn't necessarily frowned upon — ask Fleetwood Mac and the Beatles — but self-indulgence is. "Pyromania" reportedly cost more than a million pounds to record (over $4 million today, an almost unheard of cost at that time). "Hysteria" famously took three years to make. Def Lep was certainly indulgent.

But Def Leppard has always suffered from guilt by association. Commercially successful artists, especially ones who are openly aiming for massive success or who have sustained stardom, tend to be dinged for being go-getting. Call it the "tall poppy syndrome," an Australian term used to describe when people put those with fame in their place. Def Leppard is also considered one of the patron saints of hair metal, a genre still viewed with skepticism by many in the mainstream.

And then there's the fact that the band came of age just as MTV was becoming a dominant cultural force and embraced the music video medium. (Viewers can play "early music video cliché bingo" with the video for "Rock of Ages".) The band's playing the MTV game paid off in terms of record sales and fans but unfairly overshadowed the performers' formidable talents. There's the guitar pyrotechnics of Phil Collen; thundering bass lines of founding member Rick Savage; and Rick Allen's inventive, Godzilla-like beat keeping. In fact, the latter is so ingenious and dedicated to his craft that he created an entirely new way to play and record drums after losing his left arm in a car accident.

Def Leppard isn't alone, of course: Pop-metal-leaning MTV faves such as Night Ranger and Bon Jovi, current Def Leppard tour-mates Tesla and the ever-affable Sammy Hagar all have die-hard fans but receive an asterisk when it comes to full-on musical respect. Not coincidentally, all of these acts trade in escapist rock 'n' roll that celebrates the glory of rock 'n' roll itself, a self-referential tactic that's a goofy audience pleaser but not necessarily world changing.

Def Leppard fits this mold rather acutely, as its song titles include "Rock! Rock! (Till You Drop)," "Let's Get Rocked," "Rock of Ages," "Rock Brigade" and "Rocket." But the band owns its cheesiness. Lyrics such as "But are you gettin' it?/ Armageddon it!/ Ooh, really gettin' it?/ Yes, Armaggedon it!" should absolutely not work, not even a little bit. In context with its sonic dressing (twirling falsetto harmonies, fist-pumping drums, chugging guitars and cheeky pronunciation), the song pulls off the pun-driven wordplay brilliantly. Def Leppard's music is fun and embraces pleasure without judgment or shame.

That last part is key: Even at its most ridiculous, Def Leppard isn't self-important and doesn't take itself too seriously. (Tellingly, a 1983 People profile observed that Elliott owns four copies of KISS' "Love Gun.") This is a byproduct of Elliott's formative influences: David Bowie, T. Rex's Marc Bolan, Mott the Hoople and a murderer's row of '70s rock acts, including Rod Stewart, Alice Cooper, Slade and Sweet. All these artists understood the value of having entertaining stage personas and the role theatricality has in making great music. But these acts also took risks and put themselves out there, even if they did look ridiculous or flew in the face of convention.

The members of Def Leppard have always been as stoked to be onstage as their fans in the audience have been to watch the show. It's not a surprise that in interviews, the band members come across as honest and earnest, sometimes to a fault. “I’ve got political opinions, but why should I force them on everybody else?" Elliott told People in 1983. "I don’t like to hear Pete Townshend’s views on the Labor Party. I’d rather write about women and beer."

But the band members were no lightweights. In fact, despite their arena-filling sound, they were almost ascetic in their approach to their careers. "Our parents grew up in war-torn England with the Blitz going off trying to kill them and buildings blowing up here and there and they took that value system and instilled it into us," Collen told Salon in 2015. "The further you get away from that sort of suffering and hard work, the less respect and honor people have in their everyday lives. All the guys in Def Leppard had that same working class background and it was based on those values. Even down to things like not wasting water, because there were rations."

Perhaps that explains why being perceived as cool wasn't necessarily on the agenda; being true to themselves, however, always was.

"We're always bagged in England with bands like Iron Maiden and Saxon," Elliott told Rolling Stone in 1980. "Bands like Black Sabbath could be called heavy metal, but not us. I prefer to call it hard rock, or just rock 'n' roll."

Despite its rock 'n' roll bona fides, having sold more than 100 million records worldwide and having played concerts for almost as many people Def Leppard has never been nominated for the Rock & Roll Hall of Fame, despite the fact that the band has been eligible for well over a decade. The band also continues to push forward with new material and released a self-titled effort in 2015. At times, Elliott's irritation at a lack of respect from the U.K. press still flares up, however.

Neither press kudos nor Hall of Fame accolades are the end-all, be-all mark of a band's worth, however. What matters is the music and fan support – and, in those respects, Def Leppard is rocking all the way to creating a continuously flourishing legacy.