Sarah Palin's political brand has been reduced to a clickbait farm 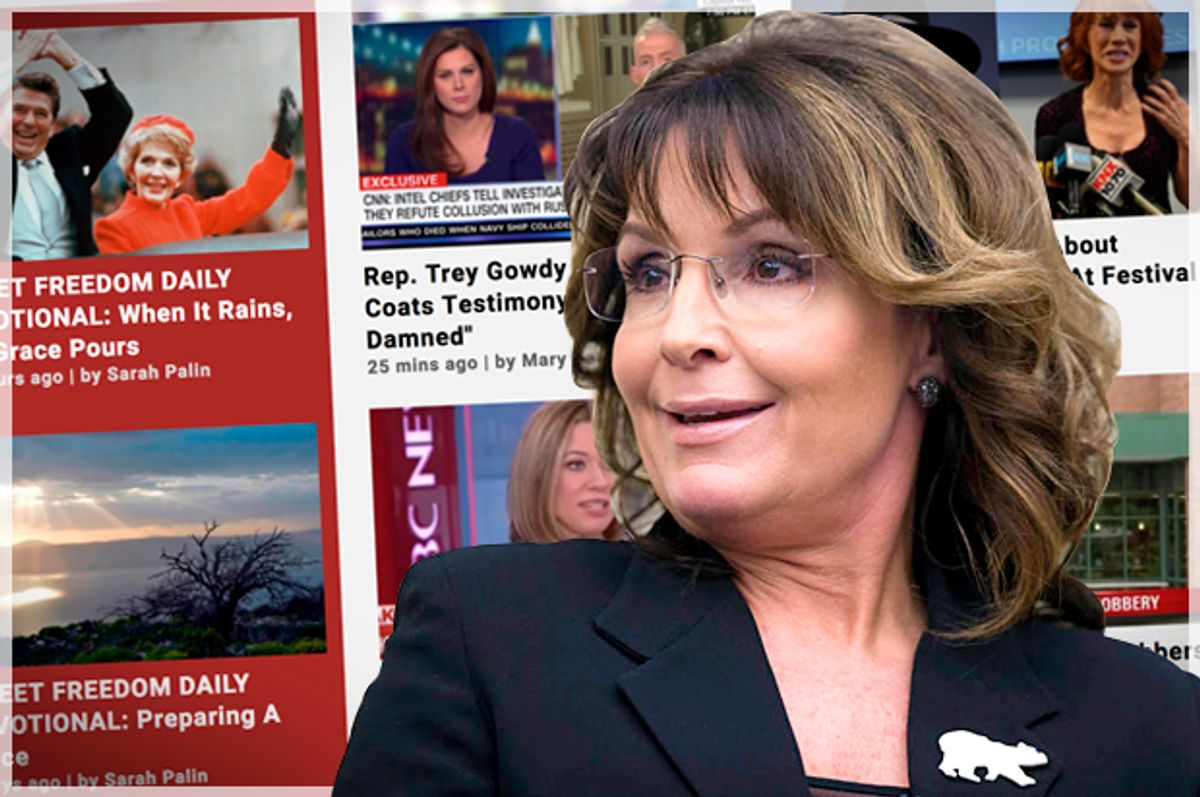 Quick: When was the last time you thought about former Democratic presidential candidates Bill Richardson, Dennis Kucinich or Mike Gravel?

Chances are, it's been a while. If you're a conservative Republican, however, more than likely, in the past few weeks, you've read or been forwarded an article found on the myriad of publications and "advertorial" websites that have been launched by failed GOP candidates like Mike Huckabee, Ron Paul, Alan West — or Herman Cain.

Whether it's Ron Paul hawking Christian fundamentalist home-schooling curricula and gold coins or Mike Huckabee shilling for cinnamon cancer cures, stuff like this simply does not exist on the political left.

It now appears that Sarah Palin, a former GOP vice presidential nominee, has also adopted a mercantile approach by effectively turning her personal website over to a clickbait company, as New York magazine reporter Olivia Nuzzi noted on Thursday.

Palin's website's transformation is definitely a step down for her brand, such as it was, from the halcyon days of 2015 when she launched a paid-subscription video service that seemed to mostly consist of randomly released, unscripted commentaries. The liberal blog Wonkette has an archive of the most notable footage for the masochistically inclined.

It's not widely known who were Palin's partners on her web TV series but her current clickbait effort seems to be run by a company called Young Conservatives LLC, a relatively recently created firm that comes in a long tradition of dubious right-leaning media outlets that have been frequently joined at the hip with dietary supplement stores and conspiracy newsletters.

Pioneers in the space include Mike Adams, the creator of a website Natural News that melds paranoid fantasies about Malaysia Airlines Flight 370 and vaccines; Porter Stansberry, a financial publisher who was doing fake news (and losing a lawsuit filed against him by the Securities and Exchange Commission) long before the internet even existed; Richard Viguerie, another early fake news purveyor; as well as Newsmax, a diet-pill empire attached to a conservative news website.

There are literally hundreds of such websites out there, and most of them existed long before Donald Trump came on the political scene.