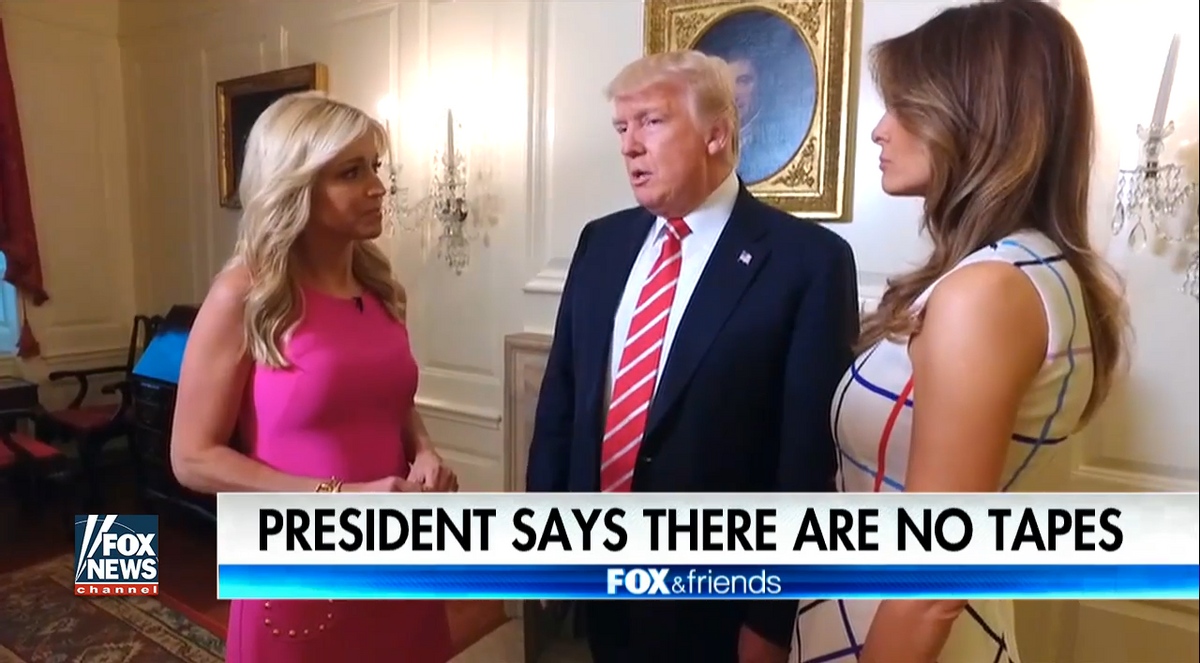 In his first interview in over a month, President Donald Trump admitted to Fox News' Ainsley Earhardt that he only had claimed to have taped conversations of James Comey because he hoped to influence his testimony before Congress.

“When he found out that there may be tapes out there  —  whether it’s governmental tapes or anything else, and who knows  —  I think his story may have changed,” Trump said. “You’ll have to take a look at that because then he has to tell what actually took place at the events. And my story didn’t change  —  my story was always a straight story; my story always was the truth. But you’ll have to determine for yourself whether or not his story changed, but I did not tape.”

The president acknowledged on Thursday that he was not in possession of any recordings of his former FBI director. But Trump's reasoning for saying that he had recordings remained a mystery — until Friday, of course, when Fox News aired an interview of the president, saying he had wanted to keep Comey honest.

Trump's statement was especially bizarre considering part of it directly contradicted hi past statements. Trump suggested in his interview with Earhardt that his strategy worked because Comey did not change his story. Earlier this month, Trump accused Comey of lying under oath to Congress. During a news conference with the Romanian president inside the White House Rose Garden, Trump said that Comey made false statements in his testimony and that he was willing to provide his own, truthful version of events under oath.

The "Fox & Friends" interview, his first since he told NBC's Lester Holt that Comey was fired over the Russia inquiry, touched on topics beyond witness tampering and collusion investigations. Here's some highlights of the interview:

Earhardt asked the president about the new health care bill in the Senate. Trump answered by declaring himself a legislative genius.

"Health care is a very difficult situation," he said. "We are trying to do something in a very short time. I've been here for five months. Well, I've done in five months what other people haven't done in years."

In March Trump had said that a health care deal would be "easy."

Millions of Americans are contemplating the prospect of possibly losing health care insurance should the Republican-supported bill pass.

The president gloats over Democratic losses

Fox News devoted one question in the Trump interview to House Minority Leader Nancy Pelosi, whose leadership role has come into question after Democrats recently lost another series of special elections.

"I hope she doesn't step down," the president said. "It would be a very sad day for Republicans if she steps down. I would be very, very disappointed if she did. I would like to keep her right where she is because our record is extraordinary against her."

"The victory in Atlanta was very big," he added, referring to Karen Handel's victory in Georgia's 6th Congressional District. "I helped a lot and we had a great candidate."