The same day the White House demanded Johnny Depp apologize for his comments, Rep. Al Baldasaro was welcomed in 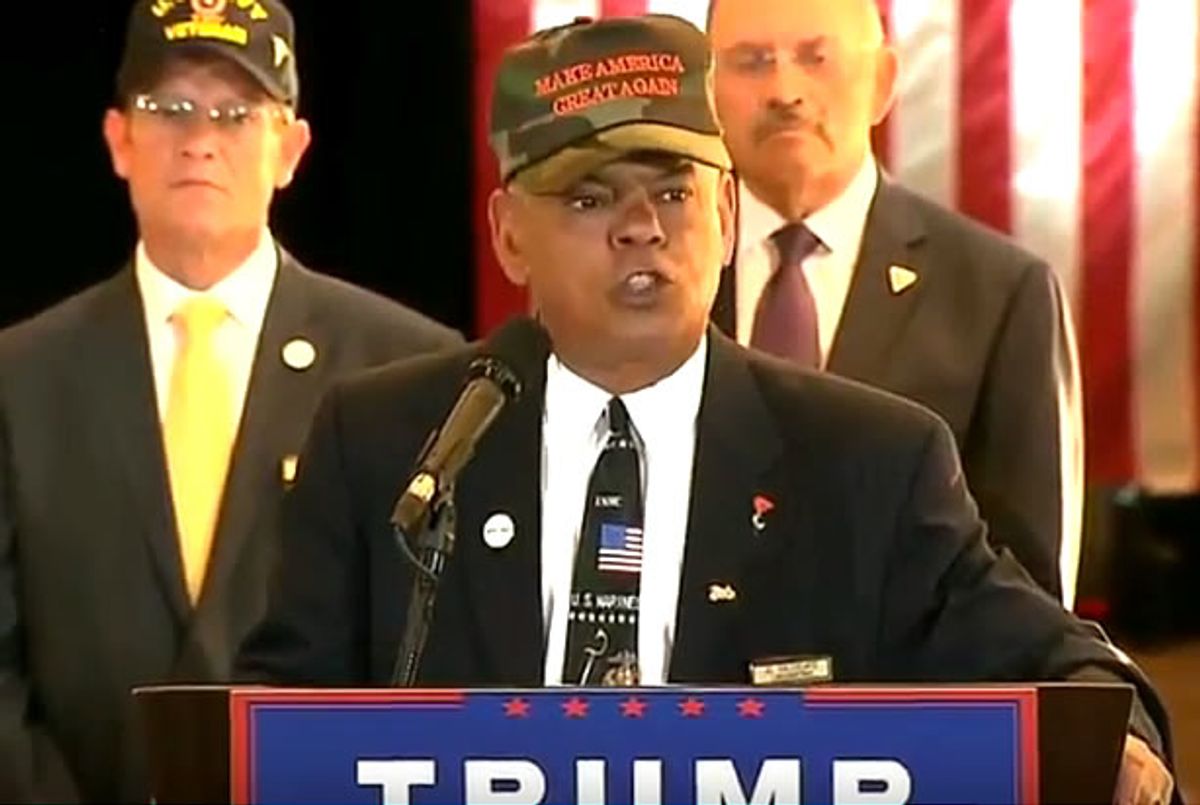 On the same day that the White House demanded Johnny Depp apologize for his comments joking about the assassination of Donald Trump, the president hosted a former campaign adviser who called for Hillary Clinton to be "shot for treason."

Republican New Hampshire State Rep. Al Baldasaro “was sitting in one of the first two rows in the audience” in the East Room on Friday during a signing ceremony for a law promoting accountability at the Department of Veterans Affairs, according to a White House pool report.

Baldasaro, an adviser to Trump on veterans affairs during the campaign, came under Secret Service investigation last year after he called for Clinton to be “put in the firing line and shot for treason" for her handling of the 2012 attacks in Benghazi, Libya.

Trump campaign spokesperson Hope Hicks later said the campaign was “incredibly grateful for his support, but we don’t agree with his comments.” While Trump himself continued to shower his adviser with love publicly.

"He's a very fine person," Trump said of Baldasaro. "He's a person that loves the military and he loves the veterans."

On Friday, Baldasaro was invited to the White House for Trump's signing of the Accountability and Whistleblower Protection Act, which makes it easier for the Department of Veterans Affairs to fire bad employees. According to the pool report, Baldasaro yelled out a thank you to the president for keeping his promise from the second row of the audience.

Two hours later, White House press secretary Sean Spicer denounced Depp's recent comments about a Trump assassination and a production of Shakespeare’s “Julius Caesar” for seemingly urging violence against the president. Depp came under fire for comments he made Thursday while promoting his new film, "The Libertine," in England, saying, "When was the last time an actor assassinated a president?"

He then added, "I want to clarify: I'm not an actor. I lie for a living, however, it's been a while. Maybe it's about time."

Spicer condemned the "lack of outrage" over the recent controversies.

“Whether it’s that or Johnny Depp’s comments or — I mean, we’ve seen this, and frankly as far as I’m concerned, I know that the President and the First Lady weighed in on Kathy Griffin’s comments,” he continued. “I don’t know that he’s aware about the play in particular that’s going on there but it is frankly, in my belief, a little troubling, the lack of outrage that we’ve seen in some of these instances where people have said what they’ve said with respect to the President and the actions that should be taken.”

Ted Nugent, who has also called for Clinton to be "hung for treason," visited Trump at the White House in April.