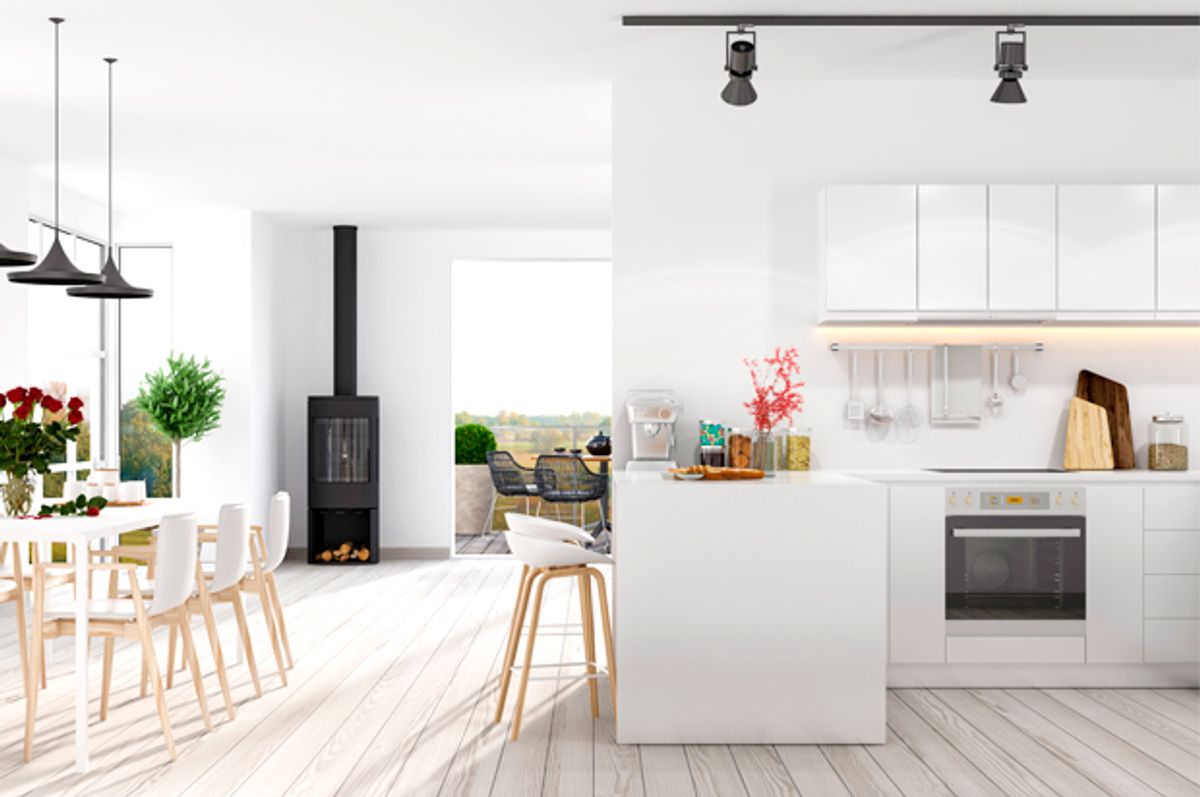 A man and woman are awakened by the cooing alarm emanating from a massive wall-mounted touchscreen. A wall of floor-to-ceiling photochromic windows gradually brightens to reveal the morning sun kissing a lush estate garden. The scene shifts to the woman brushing her teeth while checking work email from a bathroom mirror screen. Moments later, two girls in school uniforms stand in a gleaming white kitchen; one of them is playing with a touchscreen-covered refrigerator door while the father makes an omelet on a sleek high-tech induction stovetop interacting with yet another touchscreen embedded in the countertop.

Amid the tinkling of an electric keyboard, this five-minute promotional video from Gorilla Glass manufacturer Corning walks us through the day of this fictional wealthy family in an idealized version of a Manhattan-like “smart” city impossibly devoid of traffic. Corning isn’t just selling its durable glass, but its vision of future society.

In Corningland, everyone is happy, wealthy and living out fruitful, productive lives, surrounded by products of benevolent technological disruption. This world has no unhappy Uber drivers, Airbnb-fueled gentrification doesn’t exist and iPads in the classrooms actually help to educate children. When tech marketing underscores social or global problems, it’s used only as a setup to underscore how technology can solve them.

“It’s like you have one class [in tech-focused promotional material] and the class that you have is upper middle,” Chris Birks, associate professor of digital media at Benedictine University, told Salon. “You see a utopian vision, not one necessarily of everyone being super rich, but doing better than they were because of the new technology we have, which is not the case.”

As 18th-century English writer Samuel Johnson famously said: “Promise, large promise, is the soul of an advertisement.” It’s natural for product promotions to either depict the world in utopian terms or to engage in what’s known as “constructive discontent,” in which a problem is highlighted in order to show that a product or service is its solution.

“Technology advertising is especially interesting because what it’s doing is saying all technological advances are good and all technology is beneficial to the people who will be lucky enough to adopt it,” John Carroll, assistant professor of Mass Communications as Boston University, who specializes in advertising and media criticism, told Salon. “There’s nothing that says an advertisement needs to point out the downside of a product, but one of the issues here is that the counterbalancing argument that not all innovation is beneficial doesn’t get the kind of exposure that might be helpful to the public.”

Indeed, visit any technology-focused media outlet, or the tech sections of many news organizations, and you’ll see that “gadget porn” videos, hagiographic profiles of startup founders or the regurgitation of lofty growth expectations from Wall Street analysts vastly outnumber critical analyses of technological disruption. The criticisms that do exist tend to focus on ancillary issues, such as Silicon Valley’s dismal lack of workplace diversity, or how innovation is upsetting norms in the labor market, or the class-based digital divide; all are no doubt important topics, but they’re ones that don’t question the overall assumptions that innovation and disruption are at worst harmless if not benevolent.

Carroll says that it’s up to the media, schools and even religious institutions to counterbalance the presumptions made in advertising, whose goal, he points out, is often to portray happiness “through acquisition as opposed to achievement.”

This idea of selling innovation as a pathway to universal prosperity isn’t new. In the 1980s, South Korean technology companies LG and Samsung were churning out idealistic portrayals of technology’s role in creating what Su-Ji Lee, a faculty member at Seoul National University who studies design and culture, described in a paper published in November as “technological utopianism.” The idea that technology will save us all emerged in South Korea during the country’s rapid economic development following decades of poverty.

Birks, who has studied utopian depictions in web advertising, says that while innovation can be off-putting and certainly not always benevolent, it’s always been the case that innovators views themselves as disruptors.

“For better or worse, they are changing the world,” he said.

Like any sector, the tech industry isn’t going to underscore the negative implications of its innovations in its own promotional materials. Helped by more objective and less fawning tech coverage, people can decide how much technology they want in their lives. Perhaps it would help them if they realized that many of the tech industry’s most celebrated heroes, including the late Steve Jobs, are so wary of emerging technologies that they keep their own children away from their own gadgets..