The public's ratings, captured by pollsters, show the president's popularity has plummeted. Here's why 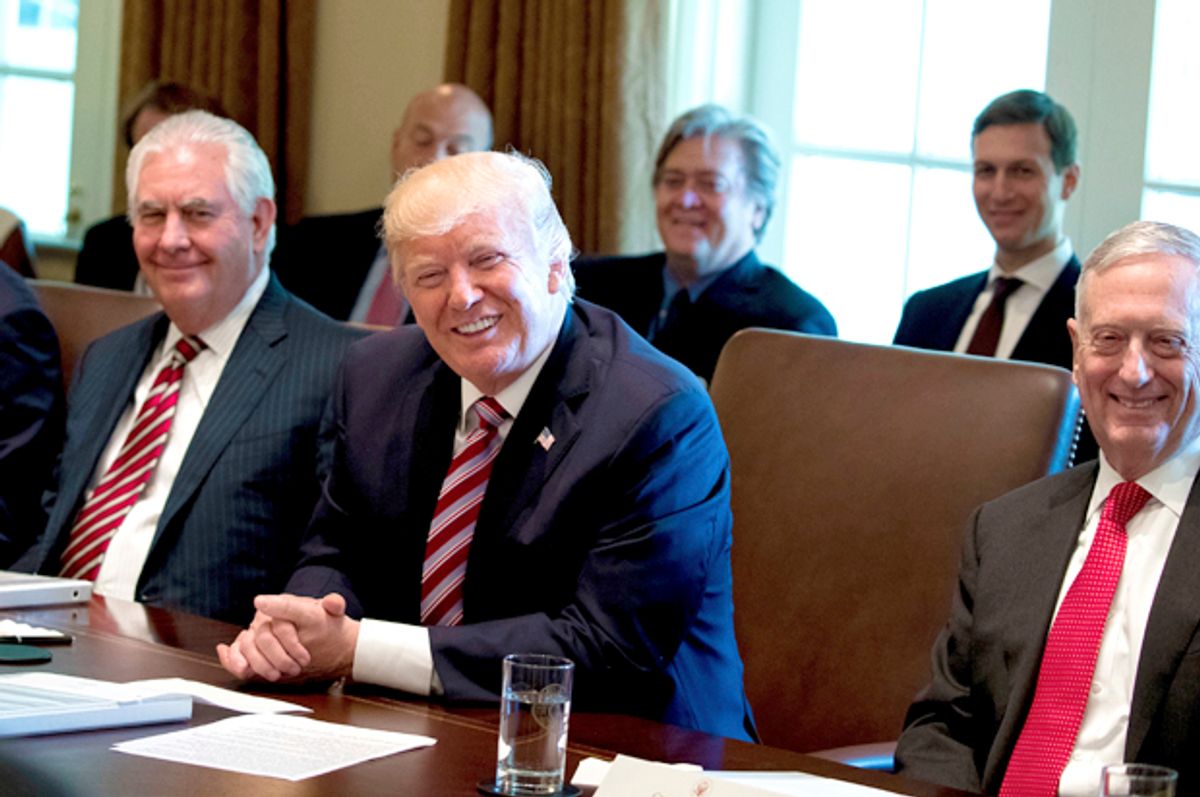 What's the matter with these people? The Trumpsters in the White House and Congress, I mean.

Start with the Donald himself, a guy who can't pass a mirror without casting an adoring eye at his own reflection. What is it about him that requires the top officials of his government to humiliate themselves publicly in the White House Cabinet room, making them try to outdo each other in a groveling Worship-a-thon of praise for this magnificence? And what's wrong with his Cabinet members?

One after another, the vice president, chief of staff, Treasury secretary, secretary of state and all the other supposedly powerful luminaries of the government of the United States of America were called upon in June's televised Cabinet session to say their name, then meekly offer their smarmiest praise of Trump's integrity, agenda and manly leadership. This spectacle of forced adulation of "the Leader" was so eerily insane that even North Korea's Kim Jong Un would've been too embarrassed to orchestrate it!

Yet Trump went even further in his flight from reality. Not satiated by the string of superlatives from his Cabinet of sycophants, he resorted to stroking his own ego, opening with the fanciful claim that Americans are "seeing amazing results" from his presidency. Shifting into overdrive, the chief proclaimed that "never has there been a president [except maybe] FDR, who's passed more legislation, who's done more things than what we've done."

Uh, no, Mr. President, not actually, not even close. I realize you don't "believe" in facts, but here's one to sober you up: The Trump White House has produced no major legislation — zero.

You're right, however, that we Americans are seeing truly "amazing results" from your six months on the job: We're amazed that in such a short time your so-called presidency is mired in conflicts of interest, constitutional quagmires, erratic behavior, ideological arrogance, tweeted ignorance, lame policy proposals and — let's admit the obvious — your own incompetence. If President Trump and his apologista in Congress wonder why they're consistently getting such miserable job approval ratings from the public, they should take a deep breath, hold their noses and  look at the god-awful policies they're pursuing.

For example, they're intentionally pushing a Draconian health care scheme that would cause widespread suffering for non-rich Americans and even deaths, while also slipping another tax giveaway of nearly a trillion dollars to corporations and wealthy investors. It's so ugly that Trump, who originally said he was "100 percent behind this," now calls the bill "mean."

And the one widely popular idea that Trump promised — a trillion-dollar investment to create good jobs for repairing America's collapsing infrastructure — has turned into a scam. His actual proposal is to give tax credits to Wall Street investors, hoping they'll put money into infrastructure projects. It's like promising to feed the oats to horses, hoping they'll pass through some seeds for birds to peck out.

Also, remember his promise to crack down on Wall Street greed-heads? Now, he and Congress are pushing a bill to coddle the banksters by removing consumer protections that restrict Wall Street greed.

But he is creating new jobs for 4,000 lucky Americans — in Afghanistan. The 16-year war there has been an interminable, unequivocal disaster for the U.S. and our troops. But rather than being a commander in chief, Trump has washed his hands of that presidential responsibility, becoming a wimpy delegator in chief by handing off responsibility to the military brass. They're now shipping 4,000 more troops into a hellish war that the American people do not support.

The greatest, overriding failure of Trump and congressional leaders is that they have no vision, no big ideas, no moxie and no understanding of grassroots people's democratic idealism. Saying "Make America great" over and over again is easy. Any gasbag can say it. But doing it takes real leadership, and the people now in charge just can't measure up. Sad.