Will Melania Trump actually speak up about online bullying? Or was the whole thing just more first-family PR?

If Melania is serious about helping kids as part of her first lady agenda, she needs to take action on online abuse 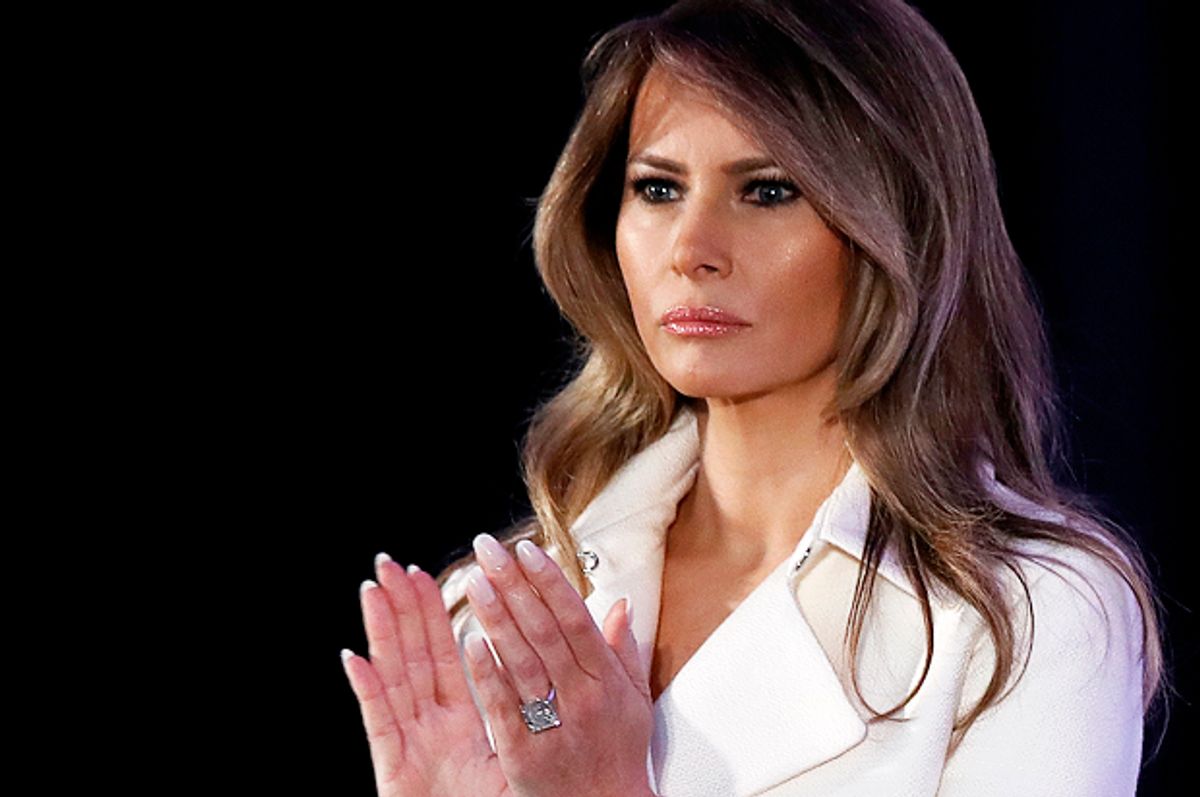 It has been an American tradition since Jacqueline Kennedy took on the modernization of the White House during John F. Kennedy’s presidency for the spouse of the president to adopt a flagship project to champion during the family's time in Washington. After all, Americans like to stay busy and value productive work — and yes, official advocacy, even when unpaid, is work — above all. While I suspect I’m not alone in not caring whether or not any first lady or gentleman decides to take a Bartleby, Bess Truman-style, and decline to perform a high-profile public service project, it is, for now, the custom. And it’s a custom that Melania Trump seemed to embrace when she announced that she would focus on fighting cyber bullying if her husband was elected.

The White House website still states, after an exhaustive list of her modeling achievements and honorary designations, that "Mrs. Trump cares deeply about issues impacting women and children, and she has focused her platform as First Lady on the problem of cyber bullying among our youth." But after months of silence on the matter, Politico reported earlier this month that a White House official said her initiative against cyber bullying had been “cast aside":

Her spokeswoman, Stephanie Grisham, claimed Melania Trump is still passionate about the issue, even though she has yet to highlight it in any public appearance. “While cyber-bullying is something she speaks out against, that is but one subset of her focus around the overall wellness of children,” Grisham said in an email.

That’s a shame, because "the overall wellness of children" appears to be intrinsically tied to social media use now. According to the Journal of Adolescent Health, social media use among young people is associated with mental health problems including depression, sleep disturbance and “eating concerns,” with 92 percent of kids ages 12 to 17 reporting that they went online every day in 2015 and 71 percent using at least one social networking site. Kids live online and on social networks; to be concerned about the overall wellness of children is to be concerned about their digital lives and how they affect their physical selves.

A heartbreaking story out of New Jersey this week puts a face on the importance of not separating kids’ online lives from their “real” lives. The community of Rockaway Township is mourning the death of Mallory Rose Grossman, 12, who was laid to rest Tuesday. While officials say her death is still under investigation, friends told NBC reporters that Mallory, a gymnast and cheerleader, committed suicide after being bullied online.

Social networking sites like Facebook, Instagram and Snapchat don’t technically allow users under the age of 13, in order to comply with digital privacy laws. That doesn't mean kids 12 and under are safe from the darker sides and potential mental health impact of social media. Age restrictions do nothing to stop a motivated tween from creating an account — my own niece tried it last year and got caught and grounded, but many kids apparently don’t even hide it from their parents — and so it's possible for an entire second layer of a child’s social life to be carried out silently, right alongside the events parents and teachers can observe, with just as much potential for harm as face-to-face interactions. Kids carry their social lives around in their backpacks and pockets on the very phones they use to stay connected to their parents, schools and caregivers. Cyber bullying isn’t a “virtual” concern anymore, if it ever was to begin with.

Nobody is so naive as to think Melania Trump could have made a direct difference in one child's life this spring. But first ladies don't only help set cultural agendas, they can directly influence policy to support those priorities, too. This October cover story by Time highlights exactly why the mental health of our kids deserves high-priority status:

In 2015, about 3 million teens ages 12 to 17 had had at least one major depressive episode in the past year, according to the Department of Health and Human Services. More than 2 million report experiencing depression that impairs their daily function. About 30% of girls and 20% of boys – totaling 6.3 million teens – have had an anxiety disorder, according to data from the National Institute of Mental Health.

Laws like Colorado's Kiana's Law, named for a teen who attempted suicide after being cyber bullied, can expand harassment statutes to include the digital realm. But laws are designed to punish perpetrators, and by the time that happens, damage to a child's health can already be done. There's much that could be designed and promoted by an influential force like the first lady's office to help educate parents, teachers and caregivers on how to spot and understand the signs of kids' distress related to their digital lives.

Will that happen in a political landscape where "snowflake" students are routinely derided for expressing their hurt and anger? It remains to be seen. We are a country so spitefully divided that Michelle Obama's belief that American kids deserve to be fed the most nutritious options available in their government-subsidized school meals is viewed as culture-war cannon fodder instead of plain common sense. Given the Trump administration's obsession with destroying as much of Obama's legacy as possible, it's safe to say that Melania won't be focusing on nutrition or physical fitness as part of her "overall wellness of children" agenda.

But we haven't heard much from Melania yet. She's only just moved to Washington and still has time to set a tone for her time in the White House beyond "impeccably dressed," if she so chooses. She should follow her instincts and follow through on the pledge she made on the campaign trail — and if she does, everyone concerned about children's mental health should embrace her work sincerely. The first lady might not have the power to target individual kids for relief from suffering, but she does have the opportunity to make a difference with a concerted effort against cyber bullying — an opportunity that grows in painful relevance every day.