Inexperienced authoritarian with a habit of blasting out his opinions in the wee hours of the morn? Sounds familiar 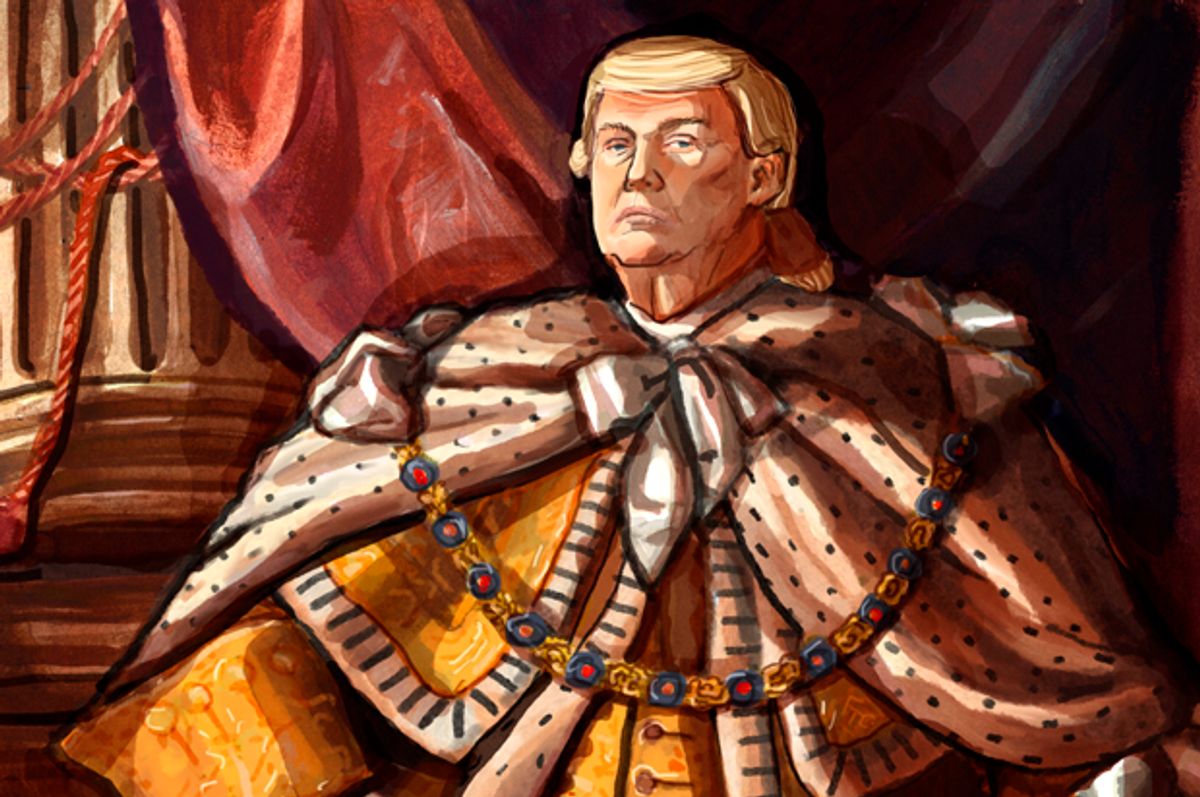 When he assumed his nation's highest office, he had no previous governmental experience. Born wealthy, he'd never worked for anyone else. Now his nation's commander in chief, he had never served in the military.

For his every move, he relied on a secretive, eccentric advisor bent on reshaping the nation's political order. Demanding absolute loyalty, the new ruler did not trust anyone more popular than he was, and detested all opposition.

If these facts sound familiar, they fit not only President Donald Trump but America's last king, George III.

He came to power at the moment of England's greatest glory, its defeat of France for control of North America.

For a century after a bloody civil war that had ended with the beheading of its king, England's monarchs had reigned, not ruled, all power vested in Parliament. Ministers backed by Parliament ruled.

Since the Restoration, monarchs had contented themselves with acquiring estates and amassing art collections — and lovers. They concentrated on maintaining a Protestant dynasty and defeating the hated French in a contest for global monopoly. Only one ever tried to turn back the clock to a powerful monarchy. He was forced to throw his mace into the Thames and flee for his life.

George III, shunned by his dissolute father, lived with his mother and eight siblings until the day he inherited the throne. Home-schooled by the reclusive John Stuart, Earl of Bute, he learned to abhor Parliament and opposition of any kind.

Still unmarried when a courier interrupted his daily ride to tell him the old king was dead, George promptly fired his brilliant and popular prime minister, William Pitt, replacing him with his tutor, a man so unpopular that crowds often attacked his carriage.

While George prided himself on being the first Hanoverian king born and bred in Britain, he feared an Englishwoman would have powerful court connections. Bute advised him to seek a bride in Germany, home of his ancestors. George never met 17-year-old Charlotte of Mecklenburg-Strelitz until she arrived with her ladies-in-waiting and went right into isolation. She soon began to bear George's 14 children.

Suffering from porphyria, a rare hereditary metabolic disorder, George took advantage of severe insomnia — he once went entirely without sleep for 72 hours — to write nocturnal notes, letters, critiques of cabinet ministers and generals, letters to citizens with complaints. Nothing was too great or trivial, from the stipends of parish clergy and the royal laundress's pension to his comments on military campaigns.

Obsessed with time and timepieces — he gave Charlotte 24 bejeweled clocks for their bedchamber — often before five in the morning he dipped his quill, noting the minute and the hour atop each missive. Even as Parliament refused to pay for a private secretary, George advocated importing cheaper workers to drive down wages and increase employers' profits.

Living frugally day to day, he lavished money on renovating the new royal residence, Buckingham House. In private, he entertained his queen by playing the harpsichord; they sang and conversed in German. She loved opera; he, theatre. He first acted in a Roman play at 10. He roared his approval at David Garrick's plays.

And George III chose a playwright as the commanding general of his most fateful military expedition.

At first, as Americans protested Parliamentary taxes, George wrote he believed the "mother country" should practice "moderation" and "firmness" with her recalcitrant colonies. But after the Boston Tea Party, he wrote, "The colonies must either submit or triumph. . . . We must not retreat."

The first year of the American Revolution went badly for the British. Bloodied at Concord and Bunker Hill, stymied by Benedict Arnold's navy on Lake Champlain, nearly losing Canada and repulsed at Charleston, the first British commanders felt the wrath of George's disapproval.

The theatre-loving king knew "Gentleman Johnny" Burgoyne, a mediocre playwright and compulsive gambler. Illegitimate son of an earl, Burgoyne had distinguished himself in combat as the risk-taking commander of the Coldstream Guards.

Sent to America as second-in-command of the failed first invasion from Canada, he hurried back to London to draw up plans for a new invasion. On March 26, 1777, in a private audience, the King personally approved Burgoyne's secret orders to launch a second invasion from Canada to split off rebellious New England by marching south from Montreal to Albany to link up with an army led by Sir William Howe, to march north from New York City.

In addition to taking heavy artillery, Burgoyne was to employ "savages" and "light forces" made up of German jaegers. Often misidentified as Hessians, they were schoolmasters, tavern keepers, tramps, violinists — anyone their princes could round up and pack off to fight. Rented out, they were literally owned by their prince: If they died, the prince was compensated, not their families. It was George who, against Burgoyne's wishes, insisted "Indians must be employed."

The plan began to fray by the time Burgoyne was ready to march. Fifteen percent of the mixed force of British, German and French-Canadian troops had to be left behind to garrison Canada. Only 400 Native Americans turned up. To drag 144 heavy cannons and haul enough provisions for 30 days for nearly 10,000 men — including 1,000 gallons of rum — Burgoyne needed 1,000 horses; he could only buy 400. The German cavalry would have to walk.

It rained for three weeks as they slogged south along the New York shore of Lake Champlain to the accompaniment of German martial tunes, soldiers and their wives struggling through the quagmire. Only officers got to sail.

Convening a "Congress of Indians," Burgoyne threatened the Americans: "I have only to give stretch to the Indian forces under my command . . . to overthrow the hardened enemies of Great Britain." His theatrical speech only guaranteed that thousands of American militia would turn out to oppose him.

Ordering "a reliance on the bayonet," Burgoyne reached Ft. Ticonderoga, abandoned when the British took an undefended hill overlooking the fortress. The Americans had begun a fighting retreat. Yet when the King heard of Ticonderoga's fall, he exulted to the queen, "I have beat them, beat all the Americans."

But he had not. Time became Burgoyne's worst enemy. All night, he could hear the dull thwack of axes and the crash of trees as a growing American army blocked the only road, slowing Burgoyne to a mile a day. Rations dwindled; dragoons were still on foot. A German raid on Vermont to round up beef cattle and horses failed miserably. Burgoyne lost one-fifth of his force.

By the time he crossed the Hudson at Saratoga, he faced thousands of entrenched Americans armed with newly arrived, French-provided artillery. In two losing battles, Burgoyne's army hemorrhaged casualties even as thousands more Americans encircled him.

Howe never arrived. He unilaterally decided to take Philadelphia and settle in for the winter. Outnumbered three to one, Burgoyne surrendered. King George's invasion plan did not include an exit strategy.

The greatest victory of the Revolutionary War, Saratoga convinced the French that, with enough military assistance, the United States could defeat England.

Disgraced, "Gentleman Johnny" returned to the one place he would ever receive accolades — the London stage — with the King cheering lustily in the audience. He had little else to cheer; he had lost America.

Willard Sterne Randall is the author of "The Founders' Fortunes: How Money Shaped the Birth of America" and "Unshackling America: How the War of 1812 Truly Ended the American Revolution," as well as biographies of several of the Founding Fathers. He is a distinguished scholar in history and professor emeritus at Champlain College who specializes in the history of the Founding Era. Prior to academia, he worked for 17 years as an investigative reporter, during which he garnered the National Magazine Award, the Hillman Prize, the Loeb Award, and the John Hancock Prize.