Did Jeff really paint that Koons? Working at a modern studio isn't exactly a Renaissance apprenticeship

Last week art world superstar Jeff Koons laid off a big chunk of his painting staff. How does that work? 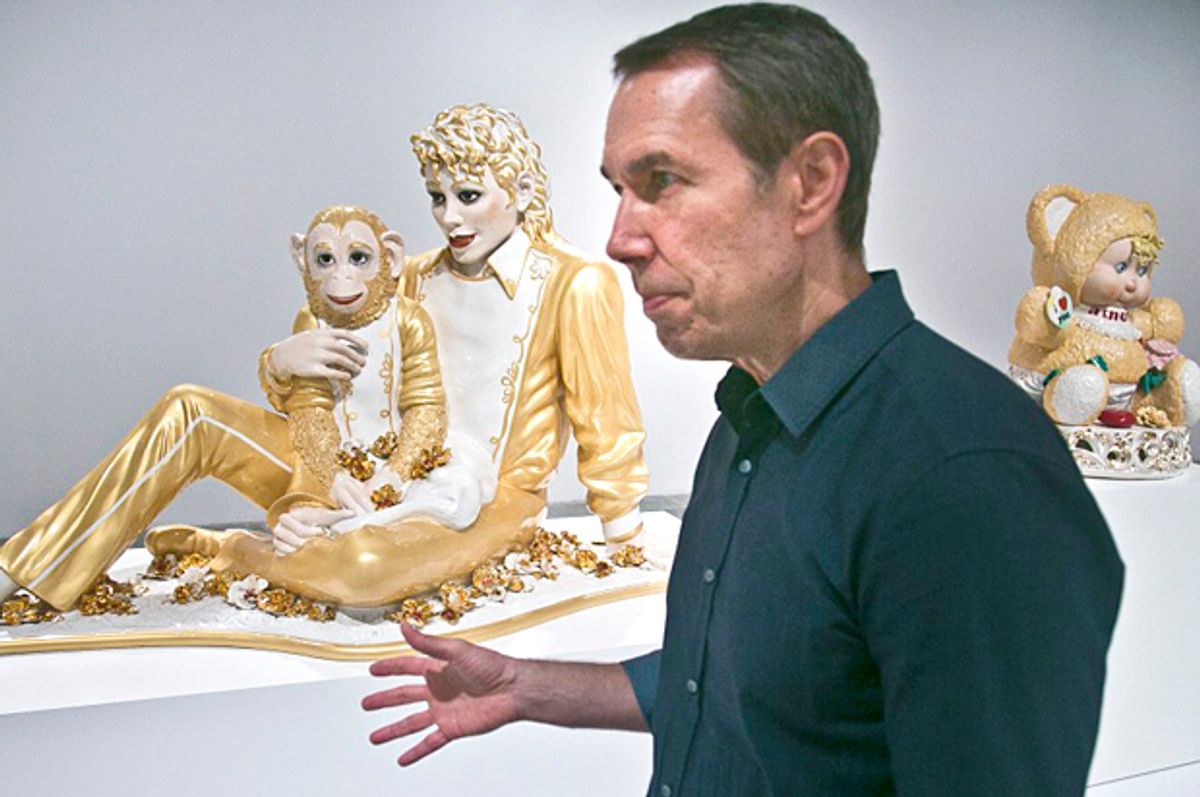 Jeff Koons near his sculptures "Michael Jackson and Bubbles," and "Amore" (AP/Bebeto Matthews)
--

Recently word filtered down through the art community that superstar Jeff Koons, who along with Damien Hirst is the highest-earning artist in art history, laid off much of his staff. To be precise, in a series of downsizing moves, he fired some 30 members of his painting staff, which at one time numbered 100. This is the third round of layoffs since 2015. Most of those painters were brought on to work on the “Gazing Ball” series; they hand-copied 35 old master paintings, to which a shiny, metallic colored sphere was added. About 30 staffers were let ago after this painting-heavy project. There were grumblings of their being vastly underpaid. (Artnet reported that some individuals were earning just $21 per hour, while Koons’ works fetch millions at auctions.)

But what surprises many observers is not that Koons would so underpay the people creating his works or that he would downsize his staff, but rather people are confused about how an artist produces works that are labeled as his own, when he may not have a hand in their making. Much was made of Damien Hirst’s recent series of paintings because he had painted them all himself. This may indeed sound like an odd statement. Don’t all artists create their own works, you may ask?

This is part of a long art historical tradition, and it is not in the least unusual or surprising. We have the Romantic era, with a dose of Giorgio Vasari’s "Lives of the Most Eminent Painters, Sculptors and Architects," to thank for the general misconception that major, professional artists create their works alone. The idea of the lone, brooding artist, possibly depressed and drinking absinthe in a Parisian garret while wearing a black beret and chain-smoking is the oddity. Most professional artists through history ran studios, often called a bodega.

To understand how studios worked (and work), we might look at a Renaissance master or to one of the most recently popular painters in the world, though few critics would raise their eyes to give him the time of day: Thomas Kinkade. The “Painter of Light,” as he was sometimes called before his death in 2012, employed an army of staffers to paint his mildly cheesy homey landscapes, the artistic equivalent of the Saturday afternoon made-for-TV Christmas films on Lifetime. Depending on how much you paid, you could get a work entirely hand-painted by Kinkade, for a small fortune. Or for very little money, you could get a work designed by the main man but painted entirely by staff. For even less, you could buy a print of one of his paintings, touched up with hand-painted “highlights.” There was a sliding scale of options to choose from, depending on how directly involved the master had been in the piece.

This is simply a continuation of the tradition of great Renaissance artists like Domenico di Ghirlandaio. Commissioning a work by Ghirlandaio did not mean that the master would paint the work entirely himself, but rather that it was the product of his studio. The more one paid (or the more prestigious the patron), the more the master would work on the painting hands-on. In most cases, he would design it, supervise its painting and likely handle the hands and faces, considered the two most difficult aspects to get right. But backgrounds, still life elements, architecture, draperies, furniture and the like would almost certainly be painted by paid assistants or indentured apprentices learning the trade.

Since oil paint takes a long time to dry, and must be fairly dry before more layers can be applied, a studio might be working on many paintings at once, with panels tucked away to dry, while several might be propped up to be actively worked on a given day. Expensive pigments would be ground by hand and mixed according to proprietary recipes designed by the master. Ghirlandaio’s preferred shade of yellow might differ from Michelangelo’s or Bronzino’s. The raw ingredients (panels, canvases, paints) would be prepared for painting by staff. The main difference between historical bodegas and contemporary studios is in the age and experience of the staff. Historical studios were part academies, part businesses. There would be paid assistants, but also a team of apprentices, who were indentured to the master, housed and fed and trained, usually beginning at ages 8 to 12, and apprenticed until ages 16 to 18. At that point, they could elect to remain in the employ of the master, now paid, move elsewhere or submit their “masterpiece” to the local painter’s guild. This was a single artwork entirely by their hand, by which the guild would determine whether the painter were skillful enough to be licensed to open a studio.

Jeff Koons is best known for his monumental sculptures resembling balloon animals but made of glossy metal. But for most of his works, he might best be considered a conceptual artist, in that he conceives of the works, designs them but he rarely actually participates in their creation, on a hands-on basis. For this, he employs a vast staff, making him perhaps more like an architect than our traditional image of an artist. Architects concoct their creations, make designs for them, but contractors do the building. Koons and Hirst appear to be less involved in the actual creation than their old master counterparts were. They are the heads of corporations, making more money than the GNP of West Timor. Their studios lack the educational component of past masters and are built more like big businesses than local enterprises.

Renaissance painters’ guilds also rigorously controlled the total number of staffers any studio could employ, in order to maintain quality. For example, in Rubens’ Antwerp, the maximum number of staff in a studio was 14 (though Rubens skirted the law to exceed that number by a large margin). Koons, by contrast, employed about 100 painters to create his “Gazing Ball” series, but understandably no longer required so many, since his projects tend to be sculptures. His reduction of staff became news mostly because of the low hourly fee he allegedly paid and because of the general (mis)conception that most artists should paint most of their work themselves.

Giorgio Vasari’s 1550 "Lives of the Artists," considered the first work of art history (and the subject of my forthcoming book), is originally responsible for our idea that an artwork is the complete creative expression of a single mind and hand. Most of how we think about art and museums today has its origins in Vasari’s hugely popular and influential group biography of Renaissance artists, many of whom he knew and worked with. By featuring masters of studios and weaving a cult around them, he downplayed the collaborative aspect of their work; this may have been a sort of defense mechanism, as he was sometimes accused of being lazy and relying too much on his assistants. Then the Romantic era promoted the idea of lonely, forlorn, brooding artists struggling to make ends meet but producing powerful art at great personal sacrifice. This idea has melodramatic appeal, and it stuck in the popular imagination. While it has been true for many artists, particularly those in the modern era, before they make it big, the truly big-name artists, from ancient times to the present, have been more like architects or film directors, designing and supervising but not always getting their hands dirty.