Lost in the Litchfield riot: "OITNB" shows how precarious mental illness treatment is behind bars 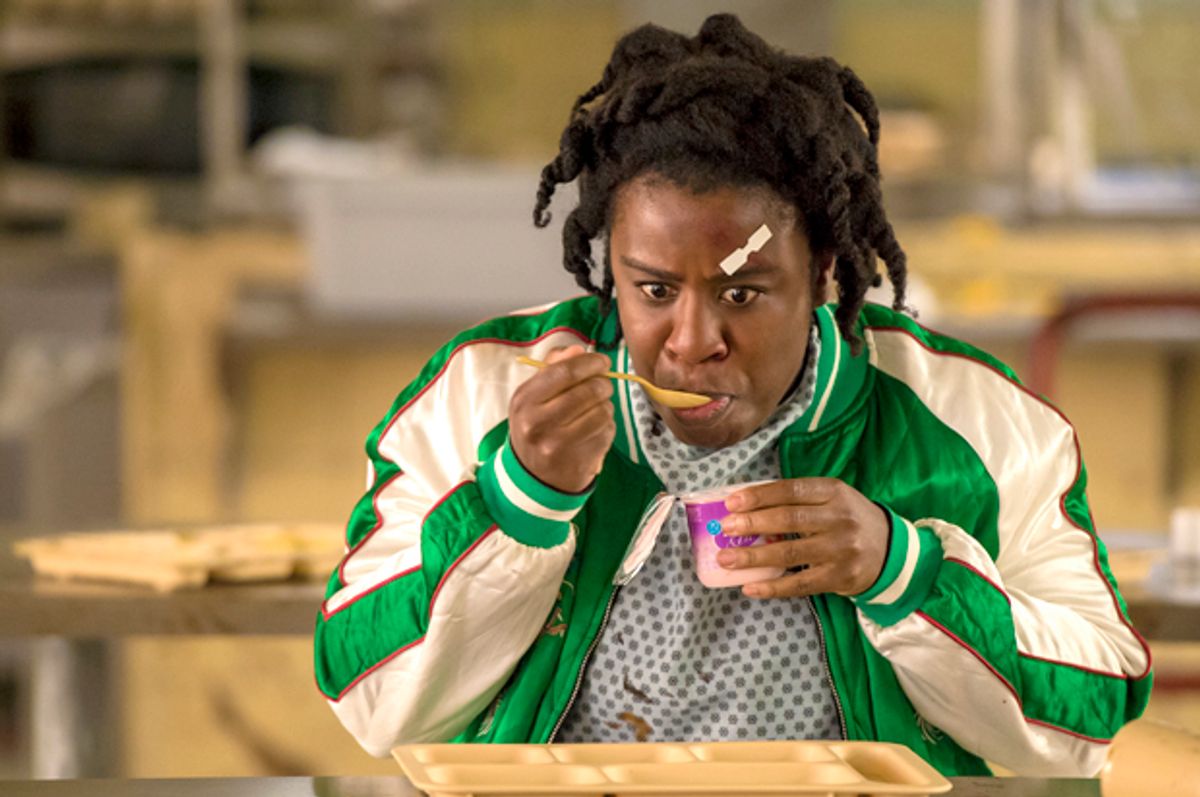 In one of the most harrowing scenes of this season’s “Orange is the New Black,” in which the inmates of Litchfield Penitentiary have staged an uprising against the guards and warden, Suzanne (Uzo Aduba) has her hands tied to her bunk by Contreras (Miriam Morales) and Ouija (Rosal Colon), who are frustrated by her unpredictable behavior, due in part to her medication regimen and her routine being disrupted by the riot. Earlier, Black Cindy (Adrienne C. Moore) and Abdullah (Amanda Stephen) had tried to cope with Suzanne’s outbursts in somewhat gentler ways, “borrowing” the hostage guards to use as playmates for her so the other inmates could focus on the important work of crafting demands. “I can’t play momma right now,” Taystee (Danielle Brooks) exclaims when Cindy explains that Suzanne isn’t adjusting to the conditions the riot has caused.

Since season 1, “Orange is the New Black” has encouraged viewers to look at the unique struggles facing mentally ill inmates at Litchfield — struggles that often echo the way that mental illness is treated in society at large. Many inmates treat mental health issues as the butt of jokes — Suzanne is nicknamed “Crazy Eyes,” while Lorna Morello, played by Yael Stone, is dubbed “Lorna La Loca” when people discover just how many of her stories are outright delusions. They also demonize those who struggle with mental illness, such as when Cindy worries that she’ll get hurt when interacting with Suzanne (“She’s jabbering like ‘The Exorcist.’ I don’t want to get puked on.”) and Ouija expresses fear when Suzanne hugs her (“I had a cousin like this. It’s all fun and loopy until she stabs you in the thigh with your 8th grade karate trophy.”)

In season 5, we see how the stigmas facing mentally ill inmates lead to their needs being pushed to the side or ignored — not just by the prison system itself, but by other inmates who are often afraid of them, and either aren’t willing or don’t know how to fully advocate on their behalf. This can be seen both by the way that mentally ill inmates are treated as well as their exclusion from the list of otherwise very well-crafted demands. While inmates call for better healthcare and care for the elderly, there is no specific language devoted to mental healthcare, even though we’ve seen mental health as a recurrent issue throughout the series.

In a recent discussion with the cast at the 92nd Street Y, both Aduba and Dasha Polanco, whose character Daya begins the season pointing a gun at a guard during the beginning of the uprising, stressed how one of the major overlooked issues in our prison system involves adequate mental health care for incarcerated people. Aduba explained how playing Suzanne has taught her that mental illness is still deeply stigmatized and how the need for better mental health care may very well be the cause of our time. Likewise, Polanco interpreted Daya’s deep sadness, anxiety and inability to function as related to (undiagnosed and untreated) post-partum depression.

Throughout the series, we’ve seen other mental health concerns brought to the forefront, including suicide, drug abuse, PTSD and inmates who are clearly suffering from paranoid delusions. In this way, mental health concerns at Litchfield — as in the very real world — are both hyper-visible as well as distinctly pushed to the side. If the riot is seen as a net gain for prisoners who have long been abused by guards, it also is distinctly harmful to prisoners like Suzanne who aren’t receiving even their baseline of care during the riot and are furthermore not advocated for or in some cases not able to articulate their own demands and express how they continue to be treated in inhumane ways — not only by guards, but also by other prisoners.

One of the most powerful things that this season of “Orange is the New Black” accomplishes is its depiction of mentally ill women as complete people who are just as capable of growth, change, kindness and compassion as anyone else. Suzanne is one of the few inmates who actually defends the hostage guards from sexual harassment and abuse at the hands of her fellow inmates, for example. Nichols (Natasha Lyonne), who herself has a long history of drug abuse and addiction, is often supportive and caring of her longtime friend-with-benefits Morello, choosing to deal with her delusions in gentle ways. When she pushes her away, it’s because of her own broken heart, not because she fears Morello and wishes to stigmatize her.

Likewise, throughout the series we see evidence of how mental illness is not a death sentence and how, with appropriate support and care, individuals with mental health issues are able to function better. We see this in season 5 in Soso (Kimiko Glenn), who struggles with suicidal ideation but who is able to channel her pain over her girlfriend’s death at the end of season 4, the event that sparked the riot, into a beautiful memorial for Poussey (Samira Wiley) when given encouragement and support from her peers.

In depicting the inmates with mental illnesses as complete people, “Orange is the New Black” is sure not to romanticize mental health issues or imply that characters dealing with mental illness don’t need treatment. We see how Morello’s decision to “free” inmates from their own treatment by taking them off their medications is truly devastating to inmates like Suzanne who need medication in order to function. And even on the guard side, we learn Brad William Hencke’s character Piscatella’s issues with rage and violence may actually be evidence of PTSD after witnessing the brutal rape of an inmate he loved deeply.

According to the National Alliance on Mental Illness (NAMI), 15 percent of male and 30 percent of female inmates have a mental health condition — two million people with mental illness booked into jails each year. These staggering statistics point to the need for adequate mental health care to be one of the most important items to consider when discussing the ways our criminal justice system needs to change. At her talk at the 92nd Street Y, Adubo succinctly explained that season 5 is about “power and what you do with it when it’s given to you.” By continuing to push mental health issues to the side, the Litchfield inmates working towards social change end up inadvertently harming members of their own community who are in dire need of advocacy.

Of course, at the end of season 5, whatever hopes we had for an even somewhat reformed prison system are desecrated as we watch a S.W.A.T. team demolish Litchfield. We see prisoners get manhandled, thrown against walls, shot at, stunned, attacked with tear gas, separated from friends and loved ones, threatened with death, and finally rounded up like cattle as they wait for buses to take them to a new location. If season 4 ended in confusion and a gun that hadn’t yet gone off, season 5 ends with the opposite: a room full of women who are sick, healthy, old, young, black, white and mentally ill, who all finally come together and hold hands.