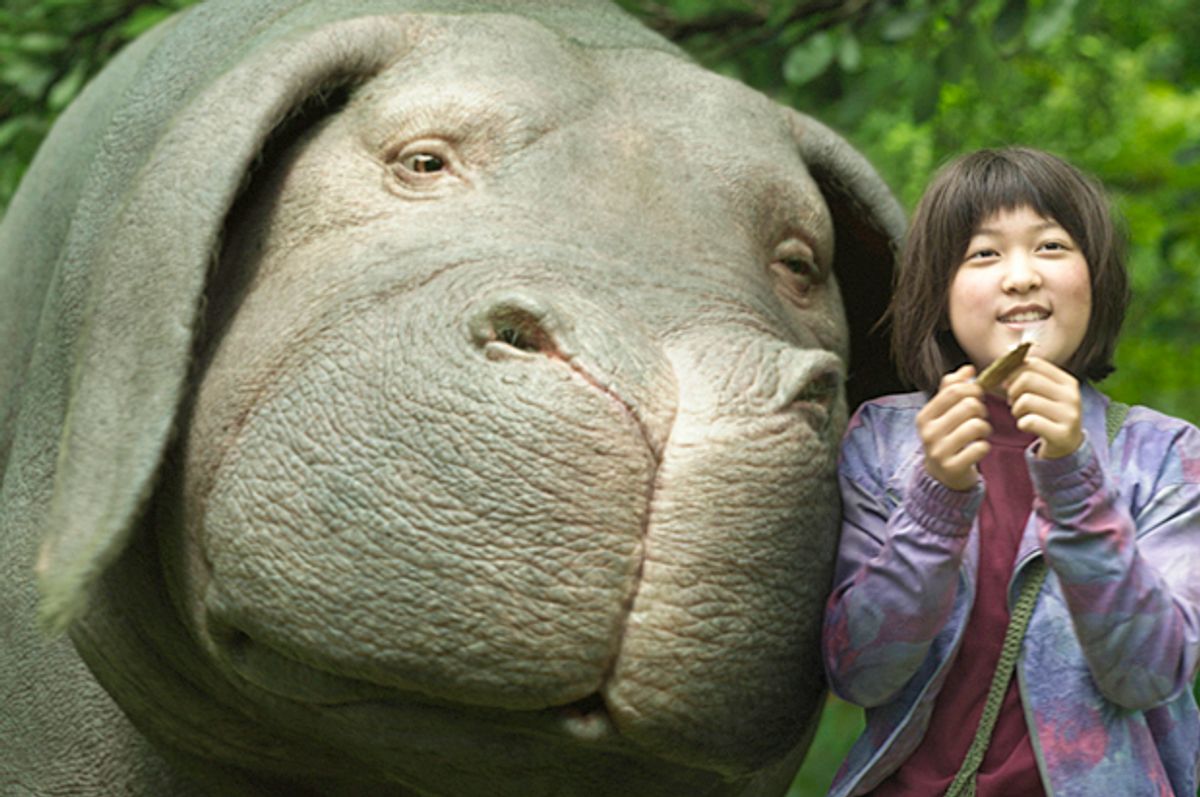 The first character we’re introduced to in Bong Joon Ho’s “Okja” is Lucy Mirando (Tilda Swinton), a woman so sparklingly white and peppy she can only be bad news. Mirando heads the Mirando Corporation, a livestock company that shares more than the same number of syllables and bookend letters with the Monsanto Corporation. Mirando is ruthless and is in the GMO business.

But whereas Monsanto breeds super crops, Mirando is breeding super pigs. Such is the reason for our introduction to Lucy. The year is 2007, and Lucy Mirando, in the equivalent of an Apple launch, is giving a presentation on how under her leadership the company is beginning a new ethical chapter, characterized by love, the environment and lots of exclamation points!

The real reason she is onstage, though, is to introduce a new food product that will save the world. Wearing braces, fine paintbrush bristle blonde bangs and a lily-colored dress, she tells the audience about the super pigs. “Our super pigs will not only be big and beautiful; they will also leave a minimal footprint on the environment, consume less feed and produce less excretions,” she says before adding the winking kicker: “And most importantly, they need to taste fucking good.” Everyone laughs.

It’s a wonder that such a garish display would be effective. But it works on two different levels. Audience members eat up the ham-handed performance, the bright lights and whiff of super bacon sufficient to cast away their skepticism around the company. And for the moviegoing audience, Lucy Mirando’s rendering as a cartoon character villain — somewhere between Ivanka Trump and Effie Trinket — works because the film takes the perspective of a child.

The protagonist of “Okja” is Mija (Seo-Hyun Ahn), a Korean girl who lives in idyllic mountains with her grandfather and Okja, her super pig. After Lucy Mirando’s presentation, 10 super pigs were given to 10 farmers in areas near Mirando's offices. Each farmer was meant to raise his or her super pig for 10 years and then return the pig to Mirando Corp, which would hold a competition to deem the biggest and best super pig.

When we meet Mija it’s the present day, 10 years after Lucy Mirando's presentation, and it’s clear that Mija never got the memo that the pigs would need to be returned. Mija’s parents are dead and Okja is her best friend. They fish together, look after each other and she sleeps as the small spoon to its ladle. Okja is like a big, brilliant hairless dog — though it more closely resembles a hippo.

The film’s inciting incident occurs when Dr. Johnny Wilcox, a daffy television host played by Jake Gyllenhaal, comes whining up the mountain to shoot a scene with Okja and take it back to New York for the competition. Mija doesn’t know what’s going on until it’s too late and Okja is halfway down the mountain.

What ensues is one of the best onscreen chase scenes in years — it includes a sort of running of the pigs — and then one of the most heartfelt and heart-wrenching stories in recent memory.

In “Okja,” Joon Ho takes animal cruelty and corporate capitalism to slaughter. And yet, he doesn’t preach or pander. A Paul Dano-led group of animal rights radicals called the Animal Liberation Front receives its share of barbs, too. At its core, “Okja” is about the pure bond between a girl and her super pig; whatever gets in their way becomes the enemy.

And what gets in the way is always adults — their politics, ideology, personal baggage and greed. Lucy Mirando is not the only cartoonish villain. Gyllenhaal’s Dr. Johnny Wilcox is somewhere between Iago (not that Iago) and the Mad Hatter. And Lucy Mirando’s twin sister (also played by Swinton), the ousted former CEO of Mirando Corp, is cut in the mold of a Cruella de Vil who’s read too much Ayn Rand. They’re all over the top, but their personalities only match their deeds. Inflicting animal suffering and lying to the public to make a buck or acquire fame is meant to be seen as a level of evil on par with that of fairy-tale villains.

As our default heroine, Mija is brave, smart, precocious and determined. She attempts the sort of stunts that are typically performed by the Ethan Hunts and James Bonds of the cinematic world. But when she, a prepubescent girl, jumps on a moving truck or kicks down a glass door, there’s an added layer of tension. The tension is usually broken by Mija falling because, you know, she’s not a superagent or superhero; she’s just a young girl. Joon Ho goes to great lengths to remind us of that: The aim of Mija’s odyssey is not to save the world, but to save her pet.

In life, the villains are as super as they are in the movies. But their plots are more insidious: Taking over the world doesn’t mean pointing a laser at Earth but creating a monopoly on livestock production. The heroes, meanwhile, are regular people, and their only recourse is to fight capitalism with capitalism and try to do what their 12-year-old selves would want them to do. Bong Joon Ho doesn’t want you to go on a hunger strike or even become a vegetarian; he just wants you to see the world through Mija’s eyes.

"Okja" will be available in select theaters and on Netflix on Wednesday.