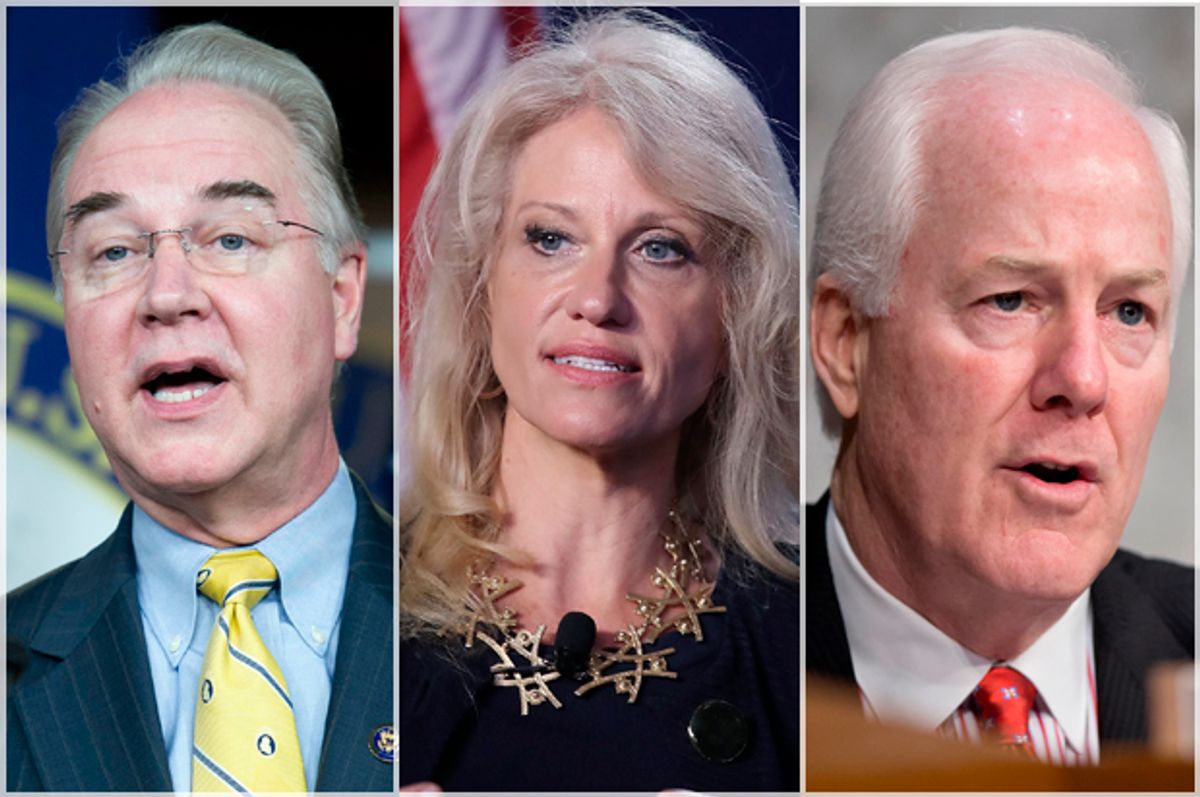 Late on Monday the nonpartisan Congressional Budget Office released its report on the Senate’s version of health care legislation, immediately debunking nearly all the Republican arguments being deployed to bolster the bill.

According to the budget office's estimate, 22 million fewer Americans would have health insurance by 2026 with the Senate bill than under the Affordable Care Act, otherwise known as Obamacare. That's only marginally better than the House bill negotiated last month between the more moderate wing of the House GOP Republican and the ultraconservative House Freedom Caucus, which the Congressional Budget Office concluded would leave 23 million people without coverage.

The Senate's bill is expected to result in 15 million fewer people with health insurance next year — with the majority of the $772 billion in savings coming via disruption in services for poor and disabled people, largely by way of Medicaid cuts.

According to a Kaiser Family Foundation survey conducted earlier this month, 74 percent of Americans have a favorable opinion of Medicaid, the joint federal and state program that provides health coverage to millions of low-income Americans. As the AARP pointed out, Senate Republicans could make deep cuts to Medicaid adding up to as much as $3.8 trillion cumulatively by 2036. Such a withdrawal of funding, the budget office reported, would "disproportionately” increase the uninsured rate among “older people with lower income."

Perhaps that is why GOP proponents of the bill, in the White House and on Capitol Hill, are trotting out boldfaced lies and specious arguments to ram it through Congress as quickly as possible — even as the list of Republicans unwilling to support it grows longer.

Republicans plan to pass their bill through the 50-vote budget reconciliation process, meaning that the six GOP senators who have already voiced their opposition to the current version of the bill put its passage in jeopardy. That number was five until Monday evening, when Sen. Susan Collins of Maine announced on Twitter she would vote no, writing, "I want to work w/ my GOP & Dem colleagues to fix the flaws in ACA. CBO analysis shows Senate bill won't do it." Republicans can afford to lose support of no more than two of their 52 senators, since none of the chamber's 46 Democrats and neither of the two independents will vote for the bill.

Hours earlier, however, senior White House adviser Kellyanne Conway appeared on Fox News to defend herself against charges of lying (accusations largely made by Republicans) after she told ABC News’ George Stephanopoulos on Sunday, “These are not cuts to Medicaid.”

“Medicaid is intended for the poor, the needy and the sick,” she explained on “Fox & Friends” on Monday. “If you are able-bodied and you would like to go and find employment and employer-sponsored benefits, then you should be able to do that.”

But the Senate bill, titled the Better Care Reconciliation Act of 2017, would terminate Obamacare’s expansion of Medicaid as of 2020 and increase cuts further in 2025. Under the Affordable Care Act, 31 states and the District of Columbia expanded Medicaid to cover nondisabled childless adults (many are homeless). Medicaid also pays for 64 percent of all nursing home care in the country.

“I respectfully disagree with her analysis,” Sen. Collins said on ABC after Conway made her implausible claim (and before Collins had officially announced she would oppose the bill). “Based on what I’ve seen, given the inflation rate that would be applied in the outer years to the Medicaid program, the Senate bill is going to have more impact on the Medicaid program than even the House bill.”

Asked by CNN on Monday about Conway’s comments, Sen. Bill Cassidy of Louisiana said, “Kellyanne Conway is not the GOP.”

Even the administration’s biggest supporters aren’t buying Conway’s spin on the GOP’s drastic cuts to Medicaid. “Unless you give some cost controls on the Medicaid program it will bankrupt every state,” former Arkansas governor Mike Huckabee, whose daughter serves as a White House spokesperson, said on Monday.

The Congressional Budget Office score also makes it clear that Health and Human Services Secretary Tom Price has either been lying or engaged in wishful thinking.

“The plan, in its entirety, will absolutely bring premiums down,” Price told CNN’s “State of the Union” over the weekend, claiming that increased competition and choices would work marketplace magic. “We would not have individuals lose coverage that they want for themselves and their family. We want to make certain that health care is available for all Americans.”

But as the budget office said, "insurance would pay a smaller share of benefits” under the Senate GOP’s bill and “most people would have higher out-of-pocket spending than current law." Premiums for individuals with private health insurance would be 20 percent higher in 2018 and 10 percent higher in 2019,  according to the Congressional Budget Office. Then they would begin to decrease, but not for a good reason. Premiums would eventually go down for many people, the budget agency estimated because the Republican-sponsored legislation would leave many people more exposed to medical bills and would force poor people off the insurance rolls altogether.

Lower-income people would face an "unattractive" array of plans that would require spending "a significantly higher percentage of income" on premiums and deductibles, the Congressional Budget Office reported. "As a result, despite being eligible for premium tax credits, few low-income people would purchase any plan" at all.

Still, the GOP leadership in the Senate appears determined to press on.

Despite describing Aug. 1 as the “drop deadline” during a Koch brothers-backed retreat this past weekend, Sen. John Cornyn of Texas reversed course late on Monday to say that the Senate must pass the Obamacare repeal bill this week.

The Senate majority whip has significant problems with the count in his caucus, however. "I would like to delay the thing," Sen. Ron Johnson, R-Wis., said on NBC's "Meet the Press” on Sunday. "There's no way we should be voting on this next week. No way." He further said:

I have a hard time believing Wisconsin constituents or even myself will have enough time to properly evaluate this, for me to vote for a motion to proceed. So I've been encouraging leadership, the White House, anybody I can talk to for quite some time, let's not rush this process. Let's have the integrity to show the American people what it is, show them the truth.

Collins echoed Johnson, telling ABC News’ “This Week”: "It's hard for me to see the bill passing this week, but that's up to the majority leader."

She was, of course, referring to Sen. Mitch McConnell, who is also being lobbied by Republican governors to slow down the rush toward passage of the bill so that it could be more thoroughly inspected. McConnell has repeatedly said he wants a vote this week, before senators leave for the Fourth of July recess. As of this writing, he appears to have nowhere near enough votes to pass it.