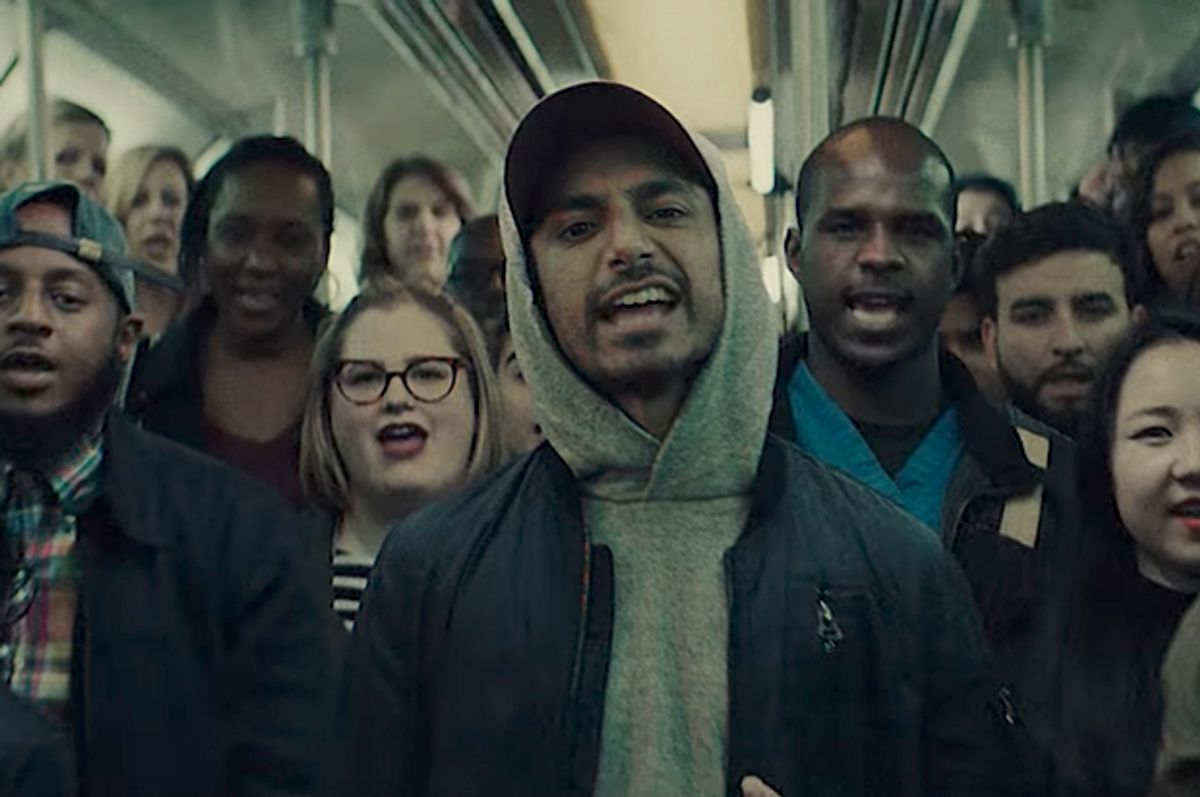 The Hamilton Mixtape: Immigrants (We Get The Job Done) (Youtube/Hamilton: An American Musical)
--

Since its debut in 2015, Lin-Manuel Miranda's "Hamilton: An American Musical" has earned its fair share of plaudits, as much for its stunning sonic and theatrical vision as for its inclusive, progressive look at U.S. history. In particular, the song "Yorktown (The World Turned Upside Down)" elicits a round of cheers in the audience whenever the characters onstage sing its now-famous line "Immigrants/We get the job done".

Now, we're getting a first look at the video for an entire song based off that one clarion call called, yes, "Immigrants (We Get the Job Done)". First appearing on 2016's "The Hamilton Mixtape" — an album-length collection of covers and interpretations of Miranda's original songs — the searing track is now set to equally searing visuals.

Directed by Tomas Witmore (born in Sweden), the video features K’naan (born in Somalia), Residente (born in Puerto Rico), Snow Tha Product (a Mexican-American)  and Riz MC (aka the British-Pakistani actor Riz Ahemd of "The Night Of" and "Rogue One: A Star Wars Story"). All of the rappers included drop bars chronicling both the hardships and strong, frankly American values of immigrants to the United States. Original "Hamilton"cast member Daveed Diggs contributes as well. Throughout, the camera flows through and on top of train — not unlike that in "Snowpiercer" — in which immigrants of all stripes labor, suffer, strive and survive as they chase freedom and success. It's all stunningly well done.

The video itself is part of Miranda's #Ham4All campaign, a promotion in which fans can win tickets to a Las Angeles showing of the musical for posting videos of themselves singing songs from the musical. All entrants must donate $10 to Miranda's Immigrants: We Get the Job Done Coalition, a partnership with the Hispanic Federation that aims to "to provide life-changing services – legal representation, advocacy, and “know your rights” awareness campaigns, and much more – to immigrants, refugees, and asylum seekers who come to us in search of the American Dream."

In the past, "Hamilton" has drawn the ire of President Donald Tump who himself has put forth a number of policies and made a number of statements that either threaten or marginalize immigrants both undocumented and legal in this country.

In mid-November 2016, the cast of "Hamilton" attempted to deliver a message to Vice President Elect Mike Pence after a performance at New York's Richard Rogers Theater. While Mr. Pence was already leaving at the time the cast gathered on stage to deliver the fairly positive, uncritical message, the President Elect tweeted that his vice president had been "harassed last night at the theater by the cast of Hamilton, cameras blazing. This should not happen!" He added, "The Theater must always be a safe and special place. The cast of Hamilton was very rude last night to a very good man, Mike Pence. Apologize!" He later claimed that "Hamilton" was "highly overrated".

Among its many honors, the musical has won 11 Tonys, a Grammy, 8 Drama Desk Awards, an Obie and the Pulitzer Prize. Between its Broadway stand and road tours, the production has sold millions of tickets.

Watch the whole video below, particularly if you're Donald Trump.