Of Caesar, guns and trolls: The evil that men do 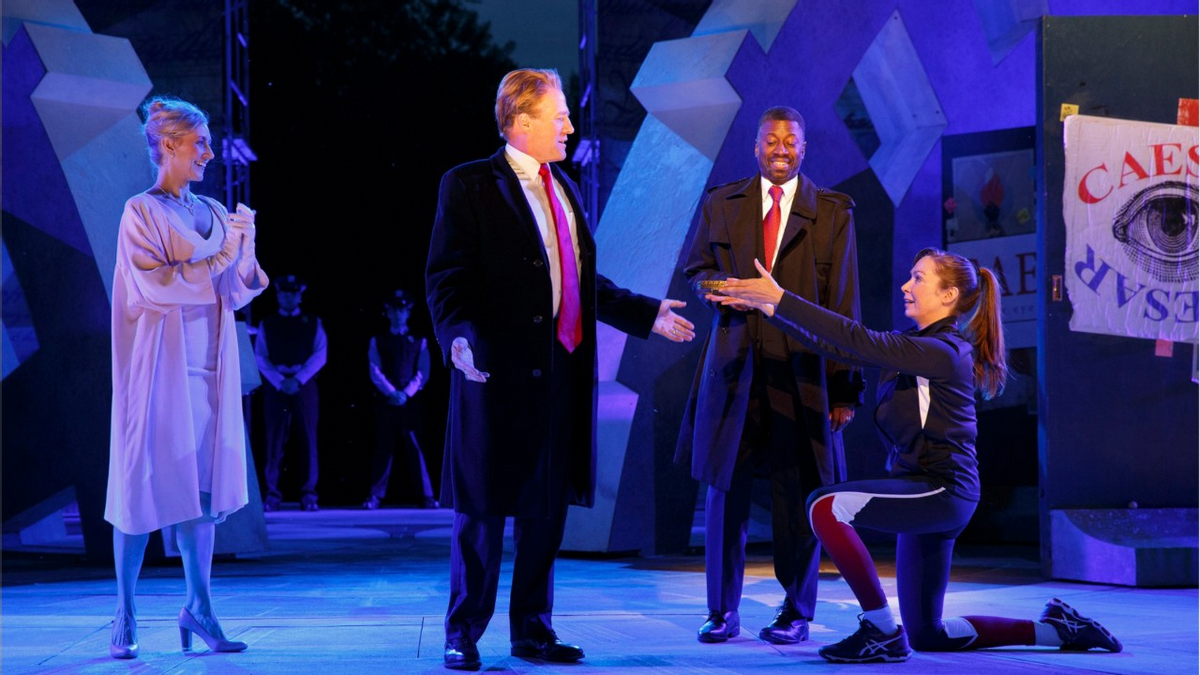 Over in New York’s Central Park, just a short distance from our offices, the curtain came down last week on The Public Theater’s controversial production of Shakespeare’s "Julius Caesar". Controversial because the actor playing the assassinated Caesar looked and sounded like Donald Trump, right down to the overlong red necktie and clownish orange-blond nimbus of hair.

But the curtain didn’t fall because of the outrage that came tumbling from the right — including protesters heckling at a couple of the performances and death threats directed at the production’s director (not to mention feverish tweets and emails from confused trolls hurled at any theatre company with the word “Shakespeare” in its name).

Nor did it occur because two of The Public Theatre’s corporate donors, Bank of America and Delta Air Lines, pulled their sponsorship of the show, a gutless move of appeasement from two businesses, banking and air travel, so well known these days for their dazzling records of customer satisfaction. (Another company, American Express, didn’t yank its cash from The Public but tweeted that its money doesn’t fund Shakespeare in the Park “nor do we condone the interpretation of the Julius Caesar play.”)

No, the fact is, "Julius Caesar" always was scheduled to end the night that it did. That was to make way for the summer’s second Shakespeare in the Park production — "A Midsummer Night’s Dream."

Gentle readers will recall that this is the Shakespeare play in which, among a great many other things, a knavish sprite named Puck turns a man into an ass. Such an act once seemed like magic, but given today’s political climate, the turning of men into asses has become the rule rather than the exception.

Witness the aforementioned kneejerk reaction of the right, so quick to accuse the left of behaving like snowflakes but themselves so hypersensitive to even the mildest heat that they melt as fast as Frosty the Snowman — that is, if he was a whiny Fox or talk radio host instead of a jolly happy soul.

We’ve established before that this is not a crowd that embraces a thoroughgoing knowledge of history in general, and it’s probably fair to assume a knowledge of theatrical history not at all. Elsewise they might realize that "Julius Caesar" is not a play that celebrates political violence but loudly condemns it.

In an email, The Public’s artistic director (and director of "Julius Caesar") Oskar Eustis wrote:

“Those who attempt to defend democracy by undemocratic means pay a terrible price and destroy the very thing they are fighting to save. For over 400 years, Shakespeare’s play has told this story and we are proud to be telling it again in Central Park.”

Back in the day, Queen Elizabeth I herself recognized that the playwright’s scripts often were thinly veiled depictions of the current political scene in Britain and even of herself. Apparently, she had a thicker skin than the gang at Delta Air Lines or Bank of America — she kept encouraging Shakespeare with money from the royal purse.

"Julius Caesar" in particular has always been a play lending itself to parallels with contemporary politics. George Washington hosted an amateur production in Philadelphia during the first full year of his presidency. He didn’t seem to take offense. Orson Welles directed and played Brutus in a 1937 staging that drew parallels with the rise of fascism in Europe, even recreating the infamous “Cathedral of Light” at Hitler’s Nuremburg rallies.

For the last few years, The Acting Company has been touring the country with a version in which Caesar bears a close resemblance to Barack Obama — no one has protested. And ever since Trump started to dominate the electoral landscape, several productions have used "Julius Caesar" as a metaphor for the debilitating illness that pervades our body politic.

“As long as politicians resemble Caesar and as long as their opponents seek to justify their overthrow, ‘Julius Caesar’ will continue to matter . . .

“It is the mark of a tolerant society that we don’t try to shut down the expression of words or viewpoints that some might find disagreeable, least of all Shakespeare’s, whose works we all share.

“We rely on newspapers to learn what is happening in the world. But we turn to productions of Shakespeare to make sense of it.”

But none of this stopped the trolls of the right from throwing a major-league hissy about the show, even if very few of them actually attended a performance. Much of the consternation was based on a video of the play’s assassination scene that went viral.

Some, Sean Hannity among them, even suggested that the recent wounding of House majority whip Steve Scalise and four others at a baseball practice in Alexandria, Virginia, somehow was linked to the production of "Julius Caesar". “The blood of Steve Scalise is on your hands!” screamed one of those who disrupted a performance. And the president’s son, Donald Jr., retweeted conservative commentator Harlan Hill’s comment that the shootings were “EXACTLY why we took issue with NY elites glorifying the assassination of our president.”

This was and is opportunistic sophistry, an attempt to use tragedy to distract by aiming a fallacious attack at “elites” and the left. The production of "Julius Caesar" should no more be condemned for its alleged connection to an act of senseless violence than "The Catcher in the Rye" should be banned because John Lennon’s assassin Mark David Chapman was obsessed with the book.

The attack on Scalise and the others was the act of a deeply disturbed man who had made anti-Trump statements on Facebook and elsewhere. And there’s no denying that it took place in an atmosphere of elevated hate speech from right and left — but face it, mostly from the right — and violence that has only gotten worse since the election, aggravated by the man now president who egged on his supporters at splenetic campaign rallies.

But let’s talk about what also really needs discussing. Not just a production of a classic play that offended some, or the unreasoned words and actions of far too many, including men and women in Congress and the White House.

Since we’re talking about the freedom to speak out, let’s speak out about guns.

For one, given the mental state of the man accused with the Scalise shooting why was he allowed to have weapons? As my colleague Michael Hiltzik at the Los Angeles Times wrote:

“In a country with sensible and intelligent firearms laws, there’s no way a person with the history of domestic violence of James Hodgkinson, who has been identified as the shooter, would be permitted anywhere near the weapons he was carrying on June 14 — and which reportedly he obtained legally.”

Too soon? Let’s pray for Steve Scalise’s continued recovery but not forget his A+ rating from the National Rifle Association or, say, his opposition to stricter gun laws after 26 died in the Sandy Hook shootings of 2014. Hiltzik noted:

“To say Scalise deserves to share blame for this situation is not to say that he deserves the punishment of a grave injury. But nor is this an occasion to ignore the policies he espouses and their relationship to the June 14 event and its aftermath . . .

“Among the bills he has cosponsored is the National Right-to-Carry Reciprocity Act, a 2011 measure that would have allowed anyone with a valid state-issued concealed firearm permit to carry a concealed firearm in any other state that issues concealed firearm permits, regardless of the other states’ standards for issuing those permits. On Jan. 6, 2016, Scalise could be seen on CNN misrepresenting, and then assailing, President Obama’s day-old executive order designed to tighten the rules on background checks of gun buyers.”

Counting the Scalise incident, according to the website Mass Shooting Tracker, as of June 25, 2017, so far this year there have been 211 mass shootings in the United States. Guns have killed more than 6,800 in America this year; 13,500 have been wounded, according to Chelsea Parsons, vice president of guns and crime policy at the Center for American Progress. In a recent op-ed, Parsons pointed out out the gun fatality rate in this country is 25 times greater than in other high-income countries.

And yes, as the argument goes, more people might have died in Alexandria if Scalise had not had armed police protection with him, but they were trained professionals, not the amateurs — including members of Congress — who want to run around with concealed carry permits and handguns wherever they choose.

But that’s what the GOP wants. Jonathan Martin reported at The New York Times:

“The Republican majorities on Capitol Hill have blocked every attempt to enact significant gun control legislation, most recently after the massacre of 49 people in an Orlando, Florida, nightclub last June. Measures to block people on the federal terrorism watch list from buying weapons and to close background-check loopholes failed in the Senate.

“And that was before President Trump was elected with far more help from the National Rifle Association than Mitt Romney got in 2012. Mr. Trump received more money from the NRA than any other outside group.”

The counterintuitive argument that the answer to guns is more guns is madness. As Marc Antony says in "Julius Caesar", during his famous oration at the funeral of the murdered leader, “O judgment! Thou art fled to brutish beasts, and men have lost their reason.”