Republicans kill their own health care bill: It's bizarro-world, but a real win for the resistance 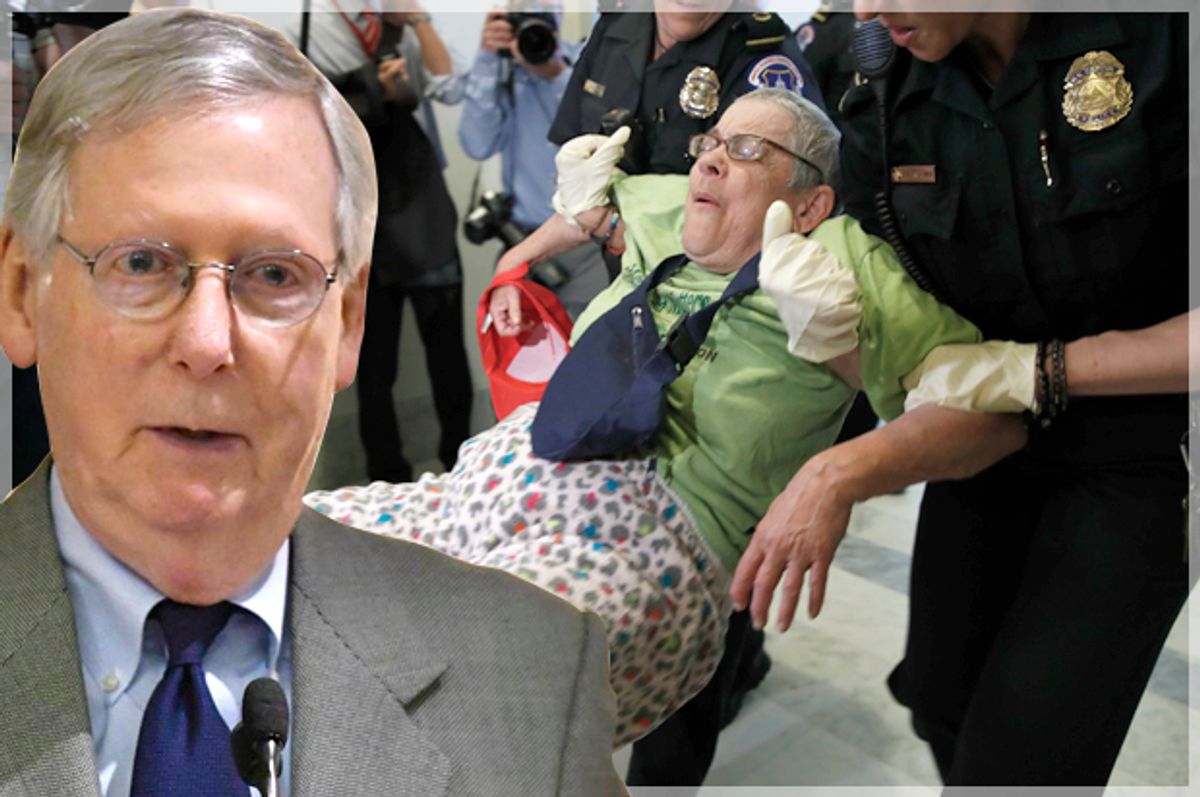 Republicans’ efforts to repeal Obamacare are dead, at least for now. While that is certainly cause for celebration, Democrats are now faced with a new dilemma: Should they rejoice and retrench in resistance, or reorient towards compromise and cooperation?

Mitch McConnell, the GOP Senate majority leader, made the somewhat surprising announcement on Tuesday that his body would not vote on the Republican health care bill -- or at least not until after the Fourth of July recess.

When their votes didn't matter under President Barack Obama, Republicans in Congress voted to repeal the Affordable Care Act, his signature accomplishment, more than 30 times. Now an odd combination of moderate and right-wing Republicans in the upper chamber has come together to quash the Senate’s version of a repeal bill, leaving McConnell and Majority Whip John Cornyn unable to make their self-imposed deadline.

Democrats were certainly the ones celebrating on Capitol Hill late on Tuesday.  “There will be single-payer [health care] in my lifetime,” Sen. Richard Blumenthal, D-Conn., predicted to booming applause from dozens of activists gathered in front of the Capitol. Originally organized for days of resistance and protest in Washington, activists from several states and progressive organizations were suddenly jubilant after McConnell admitted that he lacked the votes within his own caucus to pass the bill this week as planned.

The number that broke the bill's back: 22 million

After the Congressional Budget Office released its report Monday on the impact of the Senate Republicans’ plan to partially repeal Obamacare, known as the Better Care Reconciliation Act, the bill -- already in critical condition -- completely flatlined. Pointing to the 22 million fewer Americans the CBO claimed would be left without health insurance under the GOP plan (compared to the existing Obamacare regime), numerous Republicans backed away from their seven years of promises to enact a full repeal.

By Tuesday, it had become apparent that McConnell just didn’t have the votes for the patchwork, partial repeal in the Senate bill -- let alone the full repeal demanded by hardcore conservatives. In an embarrassing setback, the man lauded by his colleagues on both sides of the aisle as a master tactician is now forced to send his GOP caucus back to their districts for a two-week recess while an increasingly unpopular Republican health care plan is left on the table. The Democratic opposition galvanized by President Donald Trump’s election has used these periods in the past to hammer away at Republican lawmakers at local town halls. McConnell may be hoping that Tuesday’s win takes the wind out of the sails of the so-called resistance. Some Republicans who oppose the bill, like Sen. Dean Heller of Nevada (who is up for re-election next year), are already openly griping about attacks from political organizations supporting Trump. But while the GOP civil war rages on, some Democrats may be tempted to take the path of least resistance.

There are five Democratic senators up for re-election in states won by Trump. That is about the same number of votes McConnell would need if his revised bill caters to the concerns of the more moderate members of his caucus, who oppose the plan’s massive cuts to Medicaid and defunding of Planned Parenthood. Far-right members like Mike Lee of Utah and Rand Paul of Kentucky, on the other hand, have made clear that they oppose the bill because it doesn’t go far enough to repeal Obamacare.

As the New Republic’s Brian Beutler has suggested, some conservative Democrats in electoral danger -- such as Heidi Heitkamp of North Dakota and Joe Manchin of West Virginia, perhaps -- may be quick to jump at the opportunity to appear willing to compromise with Republicans while saving Obamacare. Ohio Gov. John Kasich, the leading GOP voice of opposition to the Republican bill, was quick to make this suggestion on Tuesday.

President Trump, however, has repeatedly suggested that Republicans’ political aims would be better served if the party completely in control of the federal government reneged on its years of campaign promises and allowed Obamacare to collapse (after, of course, creating the conditions for its collapse in the first place.)

"This will be great if we get it done," Trump said to defeated Republican senators who traveled  to the White House for a pep talk after McConnell’s announcement on Tuesday, “And if we don’t get it done,” he added, "that's OK and I understand that very well."

The delay on health care gives both sides time to marshal their forces. Supporters of Obamacare, including activists from Indivisible and Human Rights Campaign, appeared fired up and ready to keep fighting on Tuesday. Planned Parenthood Empire State Acts’ Robin Chappelle Golston explained to Salon that around 300 activists from Planned Parenthood chapters in New York traveled to Washington to protest the GOP bill. Chapters from Pennsylvania, North Carolina, and New Jersey were also set to come to Capitol Hill to keep the pressure on McConnell through the week. With such a win early on, however, organizers didn’t indicate if the planned protests would continue.

“Now it’s time for the next step. And the next step is single-payer,” Massachusetts Sen. Elizabeth Warren argued on Tuesday. The progressive darling -- and the activist base that supports her -- appears set to push the battle on health care to the next level just as Republicans fall on their faces. But with Republicans like McConnell and House Speaker Paul Ryan still in charge of Congress, Democrats should be wary of premature celebration. The resistance may have to morph into the Great Compromise soon enough if the health care of millions is to be saved.