Why is the GOP so terrible at health care? So many reasons — but largely because they don't understand political reality

John Boehner saw all this coming — and despite this week's debacle, Republicans will likely push on toward disaster 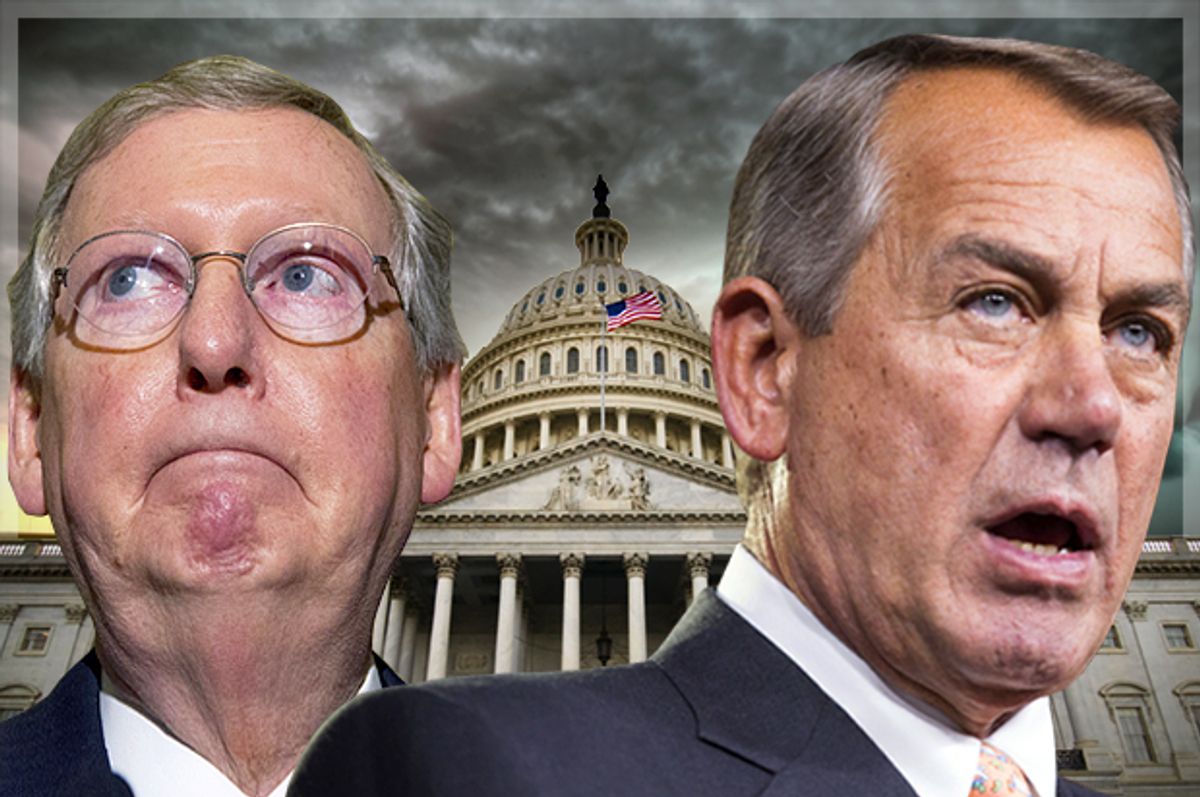 On Tuesday, Senate Majority Leader Mitch McConnell formally decided to call off a health care vote that he and other senior Republicans had been pushing toward for weeks.

Straddling a mere two-seat majority in the chamber, McConnell had to beat a hasty retreat after a number of his members indicated that they would not support the Senate's version of the Obamacare repeal bill, officially called the Better Care Reconciliation Act. The cancellation paralleled an earlier move in March by the House GOP leader Paul Ryan to scuttle a vote doomed to fail.

One person who saw all this coming was former House Speaker John Boehner. Out of Congress since the end of 2015 following a conservative attack on his leadership, Boehner told a high-dollar health care industry conference in February of this year that there was no way that Republicans were going to be able to “repeal and replace” the Affordable Care Act.

"In the 25 years that I served in the United States Congress, Republicans never, ever, one time agreed on what a health care proposal should look like. Not once,” Boehner told attendees, according to a report by Politico’s Darius Tahir.

Boehner continued, recounting that he had advised his former colleagues not to waste their time with bills that would merely repeal Obamacare without implementing some sort of alternative system.

“All this happy talk that went on in November and December and January about repeal, repeal, repeal,” Boehner said. “If you pass repeal without replace you'll never pass replace, because they will never, ever agree on what the bill should be. Perfect always becomes the enemy of the good.”

Instead of repealing Obamacare, Boehner argued, Republicans should make smaller tweaks around its edges, eliminating some of the most unpopular aspects.

In that scenario, the former GOP leader said, Republicans would basically "fix the flaws [of the existing law] and put a more conservative box around it."

Boehner’s predictive record has been better than Nostradamus since then. And the reason is simple: Republicans are bad at health care. McConnell, one of the Senate’s savviest operators in a generation, seems to have been aware of this. It’s why, in 2014, he essentially said that making smaller changes to the Affordable Care Act was his preference. At a Tuesday evening news conference, McConnell signaled to his caucus that he would reach a bipartisan deal with Democrats if Republicans couldn't get to agreement.

Beyond the wide policy differences between his members that have always made McConnell's job difficult, the GOP's health care proposal is extraordinarily unpopular. The House’s version of the bill had a 16 percent approval rating in a recent Wall Street Journal/NBC poll. According to Chris Warsaw, a MIT assistant professor of political science, the bill is even more disliked than the original version of health care reform that spooked Democrats in 1993.

As currently written, either chamber's bill almost certainly will endanger the party’s senators in purple states. Normally, politicians are loathe to stick their necks out for proposals that are unpopular, even if they agree with them. So why bother?

Obviously, political ideology is playing a huge part. Conservatives have long wanted to slash the federal budget or “drown it in the bathtub,” in the infamous words of Americans for Tax Reform’s Grover Norquist. Unified GOP control of the Congress and presidency is a great opportunity in that regard.

But ideology alone doesn’t explain why Republicans are promoting a piece of legislation that is literally the most unpopular bill in the recent history of opinion polling.

The first reason the GOP is pushing for such an unpopular piece of legislation is what might be called the conservative establishment. This loosely connected network of activists and talk show hosts has been whipped into a frenzy for seven years about the horrors of Obamacare. Failing to give them some sizable piece of legislation that they could call "repeal" will engender media attacks and primary challenges.

Party officials are also worried that if Republicans can't manage to achieve some sort of repeal, this will turn off many reliably conservative voters in the upcoming 2018 midterm elections. That matters because, thanks to President Donald Trump, the Democratic base is highly energized. If Republicans can’t get their own team to show up for the vote, they could face heavy losses.

The second pressure on the GOP is its donors. At a conference last week sponsored by billionaire brothers David and Charles Koch, several of the Republican Party's largest benefactors flat-out threatened to close the money spigot unless Republicans in Washington pass major legislation on health care and taxes.

A third reason why congressional Republicans might pass a bill that could well endanger their own re-election prospects is their sheer ignorance of political reality. According to a 2013 academic paper, GOP elected officials think their constituents are much more conservative than they really are. In fact, according to the study, nearly half of all the Republican politicians surveyed believed their voters were more conservative than those found in the furthest-right political districts in the country.

A final reason why Republicans are sure to press forward with some kind of health care bill, after they lick their wounds and return from the July 4 recess, is that most of the spending cuts in the Senate and House bills will affect people on Medicaid. The Senate’s bill, for example, reduces the program’s budget by $772 billion. In the GOP mythos, most of the individuals on Medicaid are poor people in big cities who are likely to vote for Democrats. Lowering Medicaid payments, in the minds of these Republicans, is merely taking money away from lazy slackers who don't deserve public assistance.

White House adviser Kellyanne Conway perfectly illustrated this attitude in a Monday morning interview on “Fox & Friends,” suggesting that the only people on Medicaid are people who choose not to work.

“Medicaid is intended for the poor, the needy and the sick,” she said. “So if you have an able-bodied American who again is not poor, sick, needy  —  we’re not talking about the elderly who benefit, the children, the pregnant women, the disabled  —  if you’re able-bodied and you would like to go find employment and have employer-sponsored benefits, then you should be able to do that, and maybe you belong, as [Health and Human Services] Secretary [Tom] Price has made clear, in other places.”

As was true in the case about how conservative the typical voter is, however, reality is different from Republican perception. According to the Kaiser Family Foundation, 59 percent of adults on Medicaid have jobs. About 80 percent are part of a working family. Many of the remainder of people on Medicaid are people who cannot work, such as individuals in retirement homes.

Even worse for the GOP is that many Medicaid recipients are Republican voters.

Combined with Republicans' ideological urge to cut government spending, these four factors explain why the GOP is going down a path that can only be described as suicidal. In 2010 the right widely mocked then-House Speaker Nancy Pelosi for claiming that Americans would grow to like the Affordable Care Act once it was passed. As it turns out, she was correct. The inverse is likely to happen with the Better Care Reconciliation Act, assuming it ever is passed by Congress. But because conservatives have such a distorted view of political reality, they can’t see the train  coming.

In the end, McConnell may opt to take a short-term hit from the right's outrage machine rather than risk his Senate majority. But there are plenty of reasons he might not be able to.