"Playing House" gets serious — and keeps us laughing

When an unwelcome visitor enters the house, everyone gets involved. Fortunately the playfulness continues 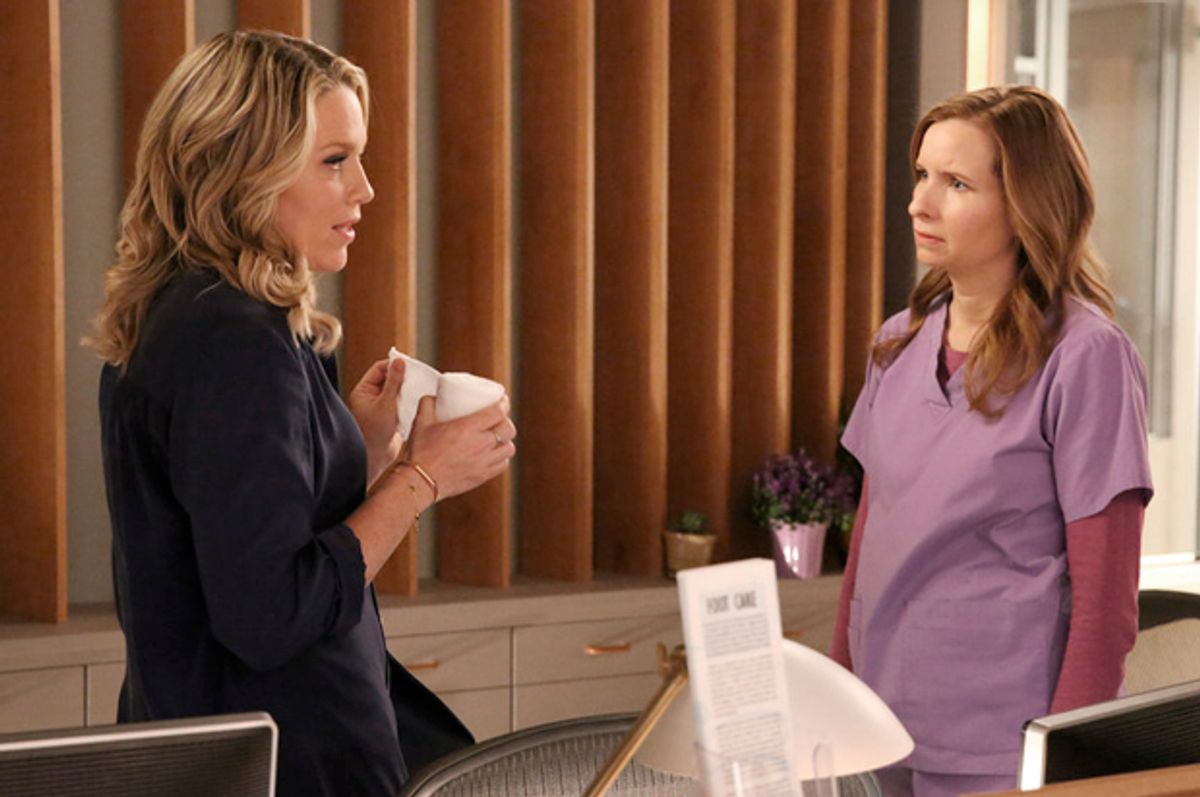 Note to readers: This article discusses a major plot arc in the current season of “Playing House” and contains spoilers.

Calling Lennon Parham and Jessica St. Clair “close friends” doesn’t accurately convey their relationship. “Sister wives” would be a better description, if not for the existence of “Big Love” and that TLC unscripted series about polygamy. Men don’t figure into their closeness at all, you see. These women love each other truly, madly, deeply and, yes, platonically. Subsequently their “Playing House” alter egos Maggie Caruso (Parham) and Emma Crawford (St. Clair) are the type of ride-or-die besties that inspire memes, greeting cards and long essays about the unique hardiness of the female bond.

The new season of “Playing House,” airing back-to-back half-hour episodes on Fridays starting at 11 p.m., gets into the nitty gritty of their camraderie in a way that’s infrequently dissected on television: the role friends play in our survival.

“Playing House” revolves around Emma and Maggie, whose affection for each other is strengthened by their co-parenting of Maggie’s young daughter, Charlotte. In Season 1 Emma gives up her successful career in business to move in with Maggie in their hometown of Pinebrook after Maggie divorces her unfaithful husband. In doing so, Emma, Maggie and Charlotte become a family unit.

The ladies are frequently furloughed from parental responsibilities, however, and do far more than lunch or work or stop at other acceptable locations in the female sitcom character canon. They get in serious trouble like clockwork, grinning and joking their way through every second.

The entire third season of “Playing House” is available to binge on demand, but this week USA debuts the third and fourth episodes — and the fourth marks a turn in the series. Right in middle of a gag Emma orchestrates to force Maggie to move on a new crush, the duo finds out that Emma has cancer.

“We were worried about bringing such serious subject matter to a comedy show, but we’ve always written what we’ve lived,” St. Clair wrote in a poignant essay posted on Stand Up 2 Cancer’s website. “And our real story is that with the help of her best friend, and the people who love her, my character is able to get through the treatment and actually emerge somehow happier and more fulfilled than she was before she was diagnosed.”

Emma’s diagnosis and the process that follows mirrors what happened to St. Clair: In 2015, at the age of 38, she was diagnosed with stage 2b estrogen positive breast cancer. Parham supported St. Clair through her treatment and recovery, just as Maggie does with Emma.

Because of that, Parham was initially reluctant to re-create the experience on their show. “I had just been beside her through it, and it’s not a fun thing to go through, cancer,” she said in a phone interview with Salon. “I was having a hard time seeing the comedy.”

St. Clair, on the other hand, knew exactly where the laughs were. Parham recalled that as she was pitching the idea to a roomful of people they know and trust, “she was telling it like it was a hilarious romp. And there were funny things that happened.

“Moving through it again,” Parham continued, “I can see how it was really good for us to tell it the way we wanted to tell it, because when cancer happens, it comes out of nowhere, it happens how it happens, and you don’t know what’s going to happen [in the end]. It felt good to take control of it together. And I felt like it was really important to her, and thus, important to me.”

Television series have celebrated female friendships ever  since Lucy Ricardo and Ethel Mertz binged on chocolates and stomped grapes together on “I Love Lucy.” A few of these pairs and groups become archetypal representatives of specific generations. That's probably why the majority of friendships portrayed on the small screen focus upon youthful players. Think “Insecure,” “Broad City” and “Girls.” Or, for that matter, “New Girl,” “Friends,” “Girlfriends” and “Crazy Ex-Girlfriend.”  The popular assumption is that the lives of 20-somethings are looser and lack ponderous responsibility. This grants writers more latitude to toss them into preposterous situations.

A recurring theme in these comedies has to do with the fear of maturity and the benefits and drawbacks of settling down and entering family life. And whether this is inferred or declared outright, most of those comedies sentimentalize the durability of the chosen family unit, sometimes as a replacement for blood relations, sometimes as a bonus feature.

“Playing House” embraces these concepts and tweaks them in substantial ways. They're middle-aged, for one thing, and other people play significant roles in their family structure. Maggie’s ex Bruce (Brad Morris) shares co-parenting duties with her. Maggie’s brother Zach (Zach Woods) is the weird comic relief who drops by from time to time, and their childhood friend Mark (Keegan-Michael Key) has fallen in love with Emma again.

But Maggie and Emma are the central couple here, and their loyalty to each other is absolute. Parham remarked that their characters contradict the idea that intimacy between friends is a surrogate for romance. “For a lot of women, those relationships are not placeholders,” she said. “They’re as important as a relationship with your spouse or your partner.”

Every character in “Playing House” understands this. Mark, a cop, tells one of Maggie’s potential love interests that she and Emma have a penchant for “lots of chicanery, tomfoolery and shenanigans.” This is after he confesses that he’s arrested them multiple times. He’s just learned to roll with it. Indeed, Parham and St. Clair write the men in their series in a way that’s as well-rounded as they are, making them supportive participants in and witnesses to the benign chaos Maggie and Emma create.

When cancer enters the house, everybody joins in the battle — but the playfulness doesn’t cease. In a lot of ways, the humor takes on a different vitality. Parham and St. Clair also found new ways to address the stops in the journey everyone is familiar with. It was important to them to feature the ways the caretaker needs and receives support, for instance. And in place of the obligatory wig-fitting episode, Emma and Maggie take a magical ride into the world of drag.

“We didn’t want to all of a sudden have a different show, where it was Sad City all the time,” Parham said. “It was very important to Jess to give comfort and optimism.” It was especially important to St. Clair, Parham added, to provide other women going through a similar experience “a way to look at it that wasn't so bleak. She wanted to keep it upbeat, keep it positive.”

Before the current season began Parham and St. Clair screened the episode for a group of their closest friends and crew, and Parham confessed to being nervous about how it would be received. When it comes to cancer and other serious illnesses, a lot of folks feel like they have to give themselves permission to lighten up.

Once the preview got underway, her fears abated. “I was really proud to see that people were continuing to laugh,” she said. “When I watch it, I don’t laugh anymore, because I lived through it. But other people find it funny, which is very awesome.”