As Mitch McConnell scrambles for votes in the US Senate, protesters target Republican senators in 10 states. 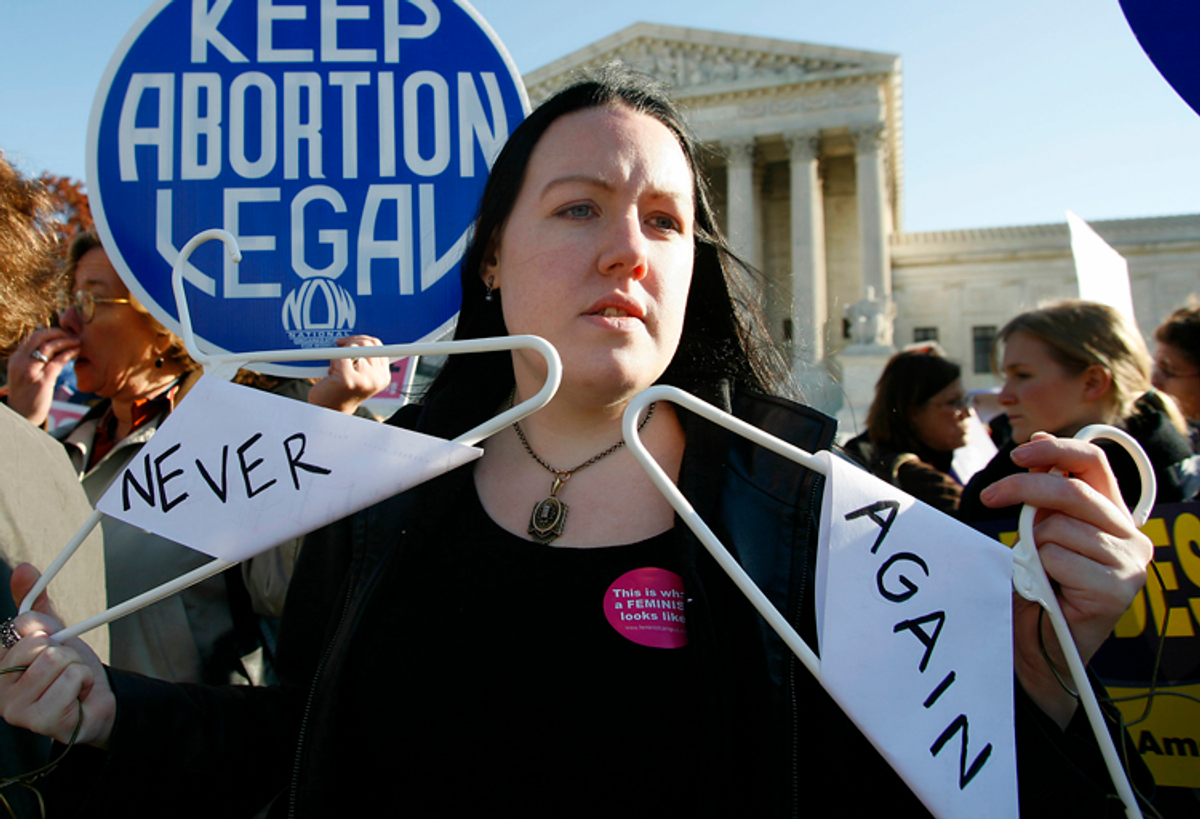 The political battle to stop the GOP-led Congress from destroying healthcare safety nets — via House and Senate bills to dismantle Obamacare and shrink Medicaid — jumped into a new orbit Wednesday, as the Senate Majority Leader said he would keep revising the legislation and numerous pro-healthcare groups stepped up their protests.

On Tuesday, Mitch McConnell announced he did not have enough votes to pass his healthcare-cutting bill before the upcoming long July 4 holiday recess. While McConnell said on Wednesday that he hoped to have a revised bill before the weekend, his failure to get 50 out of 52 Republican senators to go along prompted progressives and Democrats to launch a new wave of protests, phone-banking, letter-writing and other efforts targeting Republicans in 10 states before Congress reconvenes in mid-July.

These efforts come as new polls find that only 12 percent of the public supports the Senate Republican’s healthcare plan. “A 53% majority say Congress should either leave the law known as Obamacare alone or work to fix its problems while keeping its framework intact,” the USA Today/Suffolk University poll said.

By midday Wednesday, protests had begun. Outside the Capitol, NARAL Pro-Choice America held a rally attended by several Democratic senators and Vermont Independent Bernie Sanders. Meanwhile, on the opposite side of the country, Progressive Democrats of America activists hovered in the Phoenix and Tuscon offices of Arizona Republican Sen. Jeff Flake, where they held signs saying, “Healthcare is a Right,” “Medicare for All,” and wore hats saying, “Single-payer now.”

Flake is among a handful of GOP senators who have not endorsed McConnell’s bill or are seen as vulnerable in 2018 targeted by PDA. The other senators are Alaska’s Lisa Murkowski, West Virginia’s Shelley Capito and Nevada’s Dean Heller, who all would see draconian cuts to health care safety nets in their states.

PDA is one of many groups urging members to contact their senators. They have phone and letter-writing tools on their Facebook page. Others, like ActionNetwork.org, seeks volunteers for sit-ins at Senate offices on Thursday, July 6. While other Trump protests are planned, stopping McConnell’s health care bill is the most immediate priority.

“AllOfUs, Democracy Spring, Democratic Socialists of America, Our Revolution, and The People's Consortium are working together to organize, coordinate, and support sit-ins at Senate offices across the country on Thursday, July 6th,” ActionNetwork’s website said. “We will target as many Republican Senators as possible with a common demand that they vote NO on the Better Care Reconciliation Act.”

“Every day, Indivisible will post daily calls scripts to use on your calls to the 11 Senators in 10 key states focusing in on specific topics that must be addressed in the Senate's work. Check back here and spread the word,” they said. “McConnell’s “delay does not mean the bill is dead; it means this recess will determine whether the bill dies once and for all or lives to see another day.”

Indivisible’s site also had an interactive state-by-state map that gives callers specifics about how the Senate bill would raise premiums in each state, how many people would lose private insurance, employer-provided healthcare or coverage through Medicaid. It explains that callers to Senate offices need to speak knowledgeably to Senate staffers, because those conversations from home-state callers are noted and tallied.

“Find out how much premiums would increase and how many people would lose health coverage in your state under TrumpCare then contact the Senate staffers handling health care for your Senators and tell them to vote NO on TrumpCare,” their website said. “As we said in the Guide, the person answering the phone when you call your member of Congress’ office will be a staff assistant or intern. You should always ask for the Senator's legislative assistant who handles that particular issue for the Senator. In this case: health care. Often times, you'll be put through to that person’s voicemail. Leave one. And then use the information below to send a follow-up email.”

What stopping the senate means

The stakes are enormous in the fight over the Senate’s bill. McConnell’s legislation is not merely fulfilling the GOP’s promises for the past seven years to “repeal and replace” the Affordable Care Act (ACA), known as Obamacare. The House and Senate have used that pledge to shoehorn in another longtime GOP goal, so-called federal entitlement reform, which, in this case, has meant cutting back the future funding of Medicaid by a quarter.

Each of these elements has very different implications. The Obamacare repeal provisions deregulate the health insurance marketplace. Congressional budget analysts have said it would leave the public paying less for premiums — but far more for out of pocket costs due to escalating co-pays, deductibles and having insurance policies cover less than is now the case. As Drew Altman, president of the Kaiser Family Foundation, told NPR on Tuesday, GOP lawmakers are not concerned with cutting the same costs as the public.

“The conservatives — they’re focused on what the federal government spends on health care, reducing federal spending and cutting the federal budget and capping entitlement programs,” he said. “The American people are focused on something entirely different: their own health bills, their premiums, their deductibles, and their drug prices.”

Altman said that the House and Senate bills do nothing to address pocketbook concerns of ordinary Americans. In fact, by deregulating insurance markets, he said the GOP’s bills would make these costs take even bigger bites out of household spending.

“The biggest change in health care today has been the steady rise in deductibles and other forms of cost sharing,” Altman said. “That change in insurance is probably a bigger change than the ACA, which has occurred under the radar screen while we’ve had this great debate about the ACA. And the biggest question in health care we’re not debating is how much cost sharing is too much.”

Meanwhile, as the Wall Street Journal reported Wednesday, the real impact of the GOP’s decision to go after Medicaid (the government health plan for the poor and disabled) and mostly leave Medicare (the government plan for seniors) alone, “pits the elderly against the poor.” (The GOP bills still cut into Medicare, because Medicaid pays for nursing home care under that program.) But, as the Journal wrote, “By singling out Medicaid, it would signal that the burden of cost containment will fall largely on the poor while sparing the elderly.

The deliberate undermining of healthcare for people with private insurance and lower income people on Medicaid — tens of millions of whom are woman and children — has left longtime Democratic lawmakers like Rep. John Lewis, D-GA, and Sen. Dianne Feinstein, D-CA, saying they have never seen a bill as cruel, heartless and backwards as the GOP health care proposals. To make matters even worse, the bills’ spending cuts would be given to the wealthiest Americans as tax relief.

“Can you even believe what this does for wealthy people who can afford whatever they want with respect to healthcare?” Feinstein said Tuesday. “And all these children, five million of them [in California] that depend on Medi-Cal, or there is no health care… My voice level goes up two octaves when I talk about it — it makes me so upset.”

“I think it’s a shame and a disgrace that we are moving down this road,” Lewis said on Monday, during a discussion with Sen. Corey Booker, D-NJ, on the Capitol steps that went viral. “Telling the most vulnerable segment of society you’re on your own.”

Because of the Senate’s arcane rules and the procedural tactics that McConnell is using to push the bill through with a simple majority of 51 votes, no other Senate business can be taken up until the healthcare bill is passed or set aside.

This means that stopping the GOP’s Obamacare-Medicaid-tax cut bill will could force the Republicans to work with Democrats going forward, as much as they have refused to do so thus far. On the other hand, if they pass it (and President Trump signs it), they will quickly move onto tax reform, where the GOP wants to give even more to the wealthy, leaving, as John Lewis said, the rest of America to fend for itself.

That’s why the protests this weekend and into early July will be pivotal — as important as any seen since Trump and the current GOP-majority Congress too office.