WATCH: Can you be pro-Trump and pro-LGBTQ rights? Liberal and conservative activists disagree

What has Trump done for the LGBTQ community? Were Pride marches justified in excluding pro-Trump groups? 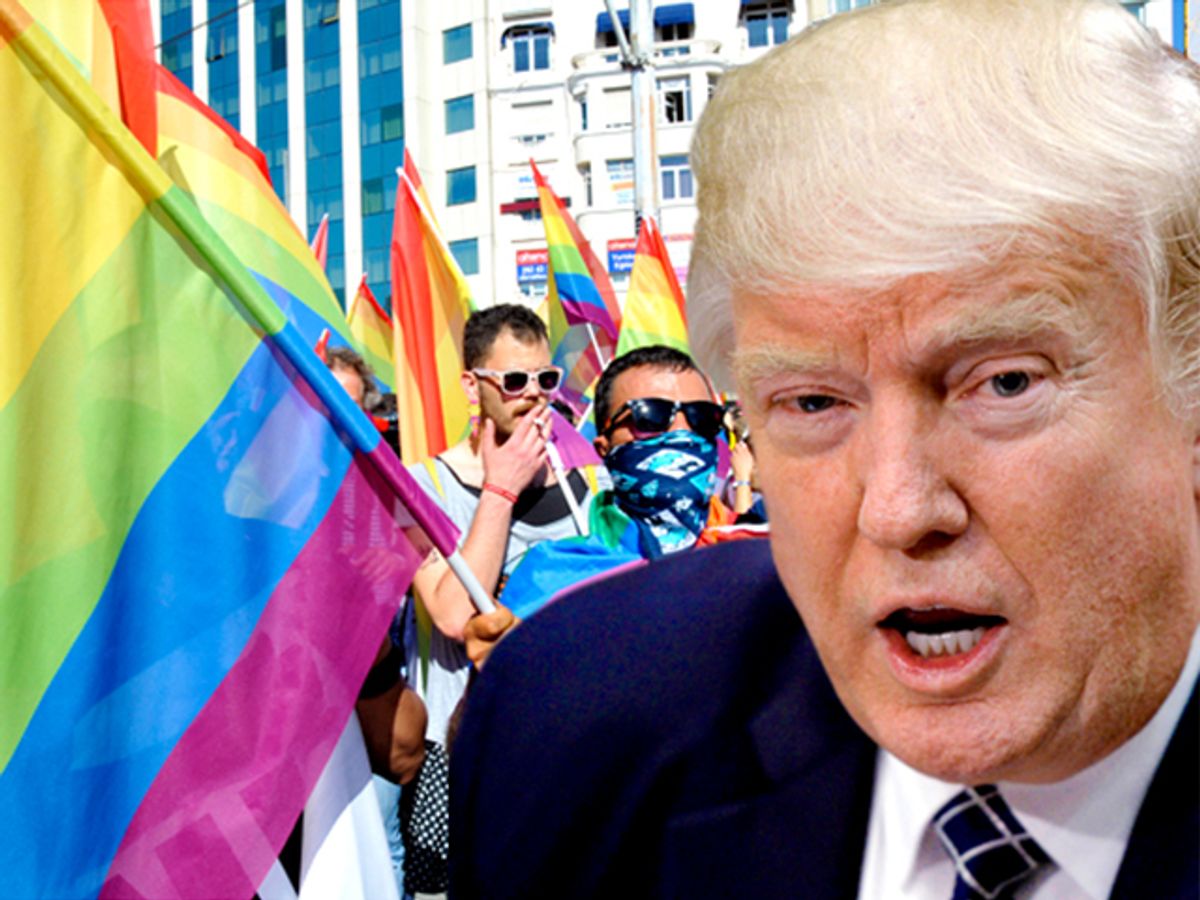 Chris Barron, a conservative strategist who leads LGBT for Trump and co-founded GOProud, believes that President Donald Trump is a champion for LGBTQ rights -- which may come as a surprise to many Trump supporters, as well as to many activists in the LGBTQ movement. Marybeth Seitz-Brown, a program associate at the progressive Roosevelt Institute, strongly disagrees, arguing that despite his limited public statements, the president has played strongly to homophobic prejudice. Barron and Seitz-Brown joined Salon Talks recently for a bracing debate on these issues.

Barron: "His positions on LGBT issues are-are longstanding. He was pro-gay long before it was trendy to be pro-gay. He is somebody who has put his money where his mouth is throughout his entire business career. He has led the way on LGBT issues with companies [that] offered domestic partner benefits [and] the first golf course that started allowing same-sex couples to be members. All of his companies have really phenomenal non-discrimination protections for LGBT folks. So for candidate Trump, now President Trump, these are not issues he’s unfamiliar with. He grew up and lived and worked here in Manhattan surrounded by LGBT people. So these are not issues he needed advising on. This wasn’t Mitt Romney."

Seitz-Brown: "I think when we think about what people’s stances are toward LGBT issues, we also have to look at their actions. So what have their policy positions been, but also how have they treated people in their lives? So all of those positions sound really great -- they also tend to benefit white and more wealthy people. Let’s not forget that Trump’s history is as a real estate mogul and a landlord who has discriminated against black Americans in this country as well. Black people are part of the LGBTQ community, they are queer and trans, they exist. So, while Trump may be a little bit less awkward about communicating his stances of support for the LGBTQ community, [when it comes to] his economic positions, his positions against immigration and his positions not standing up for people of color -- yeah, it’s really only looking at the 'G,' and the white 'G.'"

Should conservatives be concerned that the Republican brand is so weak in the LGBTQ community, a driving force in American culture?

Barron: "What bothers me is that so far multiple Pride parades have not allowed LGBT for Trump to participate ... Charlotte Pride made the decision to exclude LGBT for Trump after initially accepting it. Bangor, Maine, Pride did the exact same thing. So, look ... you don’t have to love Trump and you can pretend that nobody who is LGBT voted for Trump. But plenty of us did. And the fact is that it’s kind of disgusting and gross to think that the LGBT community that has talked so much about diversity and acceptance and everything else is now saying, 'We’re going to choose to exclude LGBT people who we disagree with about who they voted for. It’s perfectly fine to import people into this country who want to kill LGBT people, but we can’t allow somebody who voted for Trump to participate in LGBT Pride because we’ve decided you don’t get the letters anymore. You’re no longer LGBT: You’ve forfeited it because you voted for somebody that we decided we don’t like anymore.’"

Seitz-Brown: "I think we have a fundamental disagreement and misunderstanding of like what the legacy of LGBT activism is. For me, it’s not just, you know, we celebrate any kind of opinion ... and if you’re gay, great, we celebrate you, we love you. Stonewall was a riot led by Sylvia Rivera and Marsha P. Johnson, who were trans women of color who fought against capitalism, who fought against the white supremacist state, and who said, 'We are fighting for our liberation,' not 'Anyone who loves the cops or who loves the free market is welcome.' There was a specific goal for liberation. I want to make sure that we actually remember that history."