No black person is safe in America

If you are white in America, you have an unfair advantage solely based on skin color. So deal with it 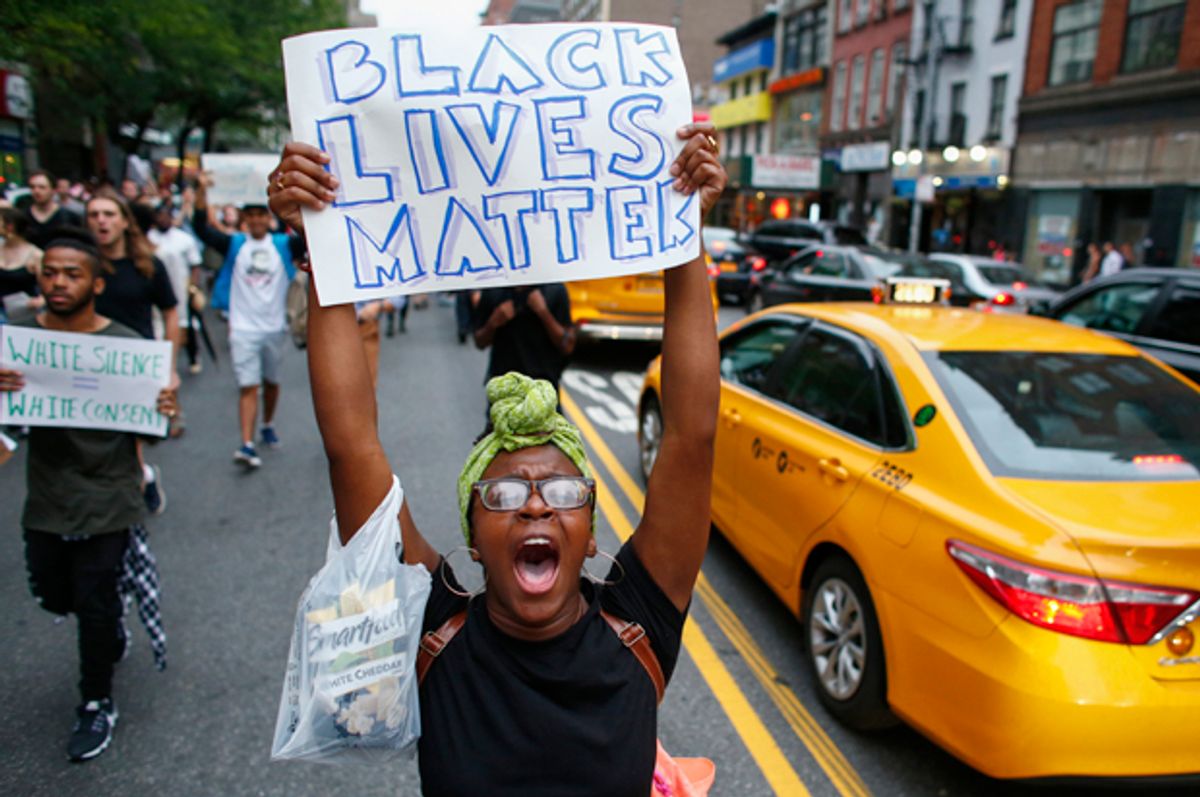 Excerpted with permission from "The Beast Side" by D. Watkins. Copyright 2015, Skyhorse Publishing, Inc. Available for purchase on Amazon, Barnes & Noble and IndieBound.

One night, I participated in a peaceful protest near downtown Baltimore. My fellow protestors and I were standing in solidarity with the citizens of Ferguson, Missouri, over the murder of Mike Brown—an innocent African-American teen, who was on his way to college when he was cut down by a policeman’s bullets. It felt good to unite with so many different people for the same cause, a diverse group with handmade signs and a shared sense of outrage. But even as we shouted for justice, I knew it wasn’t enough, from my experiences in rallying for the Jena six and Trayvon Martin. I do have immense respect for protestors, marchers and organizers, but in the end, after all that chanting, marching and lying down in traffic, Darren Wilson, the cop who murdered Brown, still went free, and cops in America still feel comfortable killing innocent black people. Every time a black body falls at the hands of a rogue cop, the same protests erupt on one side, and the same naive voices echo the same nonsense on the other: “Well, if they were innocent, why did they run? Why did they attack an officer, why didn’t they obey?” I get where these confused voices come from. In a perfect world, innocent people should not have to run or protect themselves from the people responsible for protecting us. However, America is far from perfect, and African-Americans are about as safe as a chunk of steak in a den full of starving lions. It doesn’t matter if you stay or fight back or run, because either way they’ll murder you.

Freddie Gray in Baltimore ran, and when they caught him, he was murdered.

Walter Scott in South Carolina ran, and he was murdered, too.

Oscar Grant in Oakland was face down on the ground with the cuffs on, and they murdered him.

John Crawford in Dayton was minding his own business, shopping at WalMart, holding one of the store’s BB guns and an officer opened fire within seconds of interacting with him.

Mike Brown in Ferguson, whom we were rallying for that day in Baltimore, put his hands up, and the cops blew holes through them.

Sean Bell in New York was just trying to get married, and police killed him.

Eric Garner in Staten Island pleaded for his life after he was in custody—on video, in public, broad daylight—and they still killed him.

Ervin Edwards — mentally ill and partially deaf — had his pants hanging low, so police tasered him to death after he was in custody.

Jonathan Ferrell in North Carolina wanted some help because he was in a car accident; cops shot him to death as he reached out to them for assistance.

Tamir Rice in Cleveland was only 12. Being a kid can’t save you, because he was gunned down, too.

Thaddeus McCarroll in St. Louis was killed because he had a knife and a Bible.

Rekia Boyd in Chicago was killed by an off-duty cop who fired into a dark alley.

Ramarley Graham in New York tried to run into his home, and they got him.

Kathryn Johnston, a 92-year-old woman in Atlanta, was relaxing in her home, and police stampeded in like cowboys and killed her in a botched drug raid.

Akai Gurley in Brooklyn just happened to be in his stairwell minding his own business — with no weapon — and was killed for that. Just like they heedlessly murdered Sandra Bland and Alton Sterling and Philando Castile.

You can be from Africa like Amadou Diallo in New York or known as a nice guy around Baltimore like Tyrone West or Anthony Anderson: It doesn’t matter, no black person is safe. Kids, grannies, city workers, hustlers, church boys, prom queens, junkies, whatever — they’ll murder you.

These killings happen almost every day in America, so often that the newspapers should print a daily death count, with photos of the casualties, the way they do during wartime, because for black America, this is wartime. What’s disgusting is that nearly all of the officers who commit these heinous acts are found innocent. Many aren’t even charged due to the various versions of the “Law Enforcement Officers’ Bill of Rights” that exist in every state. In Maryland, where I live, police officers get 10 days before they even have to speak about the killings they’re involved in, giving them ample time to assemble the mountains of lies that normally get them off. The Guardian recently reported that police will kill blacks this year at twice the rate of whites, and this is the norm.

If some racist cop isn’t gunning us down, then a racist psycho is trying to do the same. And just like in the police cases, white privilege prevails — even in outrageous incidents like the massacre at Charleston’s Emanuel AME Church.

At the time of his arrest, Roof was an armed and dangerous fugitive, who had heartlessly gunned down nine church members. But he still received the utmost care when he was taken into police custody. The cops even bought him a hamburger and fries at a nearby Burger King when he told them he was hungry. Later they gave him a nice bulletproof vest to ensure that he wouldn’t receive any harm as he was gently escorted to and from the courthouse. When the cameras flashed, he was clean and spotless, with every hair of his Lloyd from "Dumb and Dumber" cut in place.

Imagine how the cops would have reacted if a hate-spewing, black extremist had shot up a white church prayer meeting, telling his victims as he blasted them at point-blank range, “I’ll give you something to pray about.” Let’s just say he wouldn’t have been treated to a Whopper. If he were black, he probably would have ended up like the innocent and unarmed Cleveland couple, Timothy Russell and Malissa Williams, who also fled the police but received no empathy restraint or burgers when they were apprehended — just 137 bullets sprayed into their car for being on the wrong side of privilege. There’s a collection of contemporary cases that display similar results.

Talking about white privilege and its role in these shootings always makes white people uneasy, probably because no one wants to feel like he or she has an unfair advantage over another person solely based on skin color. However, if you are white in America, you have an unfair advantage solely based on skin color. So deal with it. You’ll probably go to a better school, have a higher-paying job, live in a safer neighborhood, never be profiled by police officers, get lower interest rates, and always have the luxury of walking around stores in peace. It is that way, it has been that way and chances are it will remain that way for the foreseeable future. Dr. Karl Alexander of Johns Hopkins University recently completed 35 years of research dealing with the poor white experience vs. the poor black experience. He published his findings in his book "The Long Shadow," observing that whites use more drugs but are less likely to be charged with a crime. In Baltimore — where 97 percent of the black people who are born in poverty die in poverty — it’s easier for white people with some jail time on their records to get a job than black people with some college.

Like many, I’m sick and tired of the same old, same old when it comes to the inequality of justice in America. I’m tired of officers getting away with murder, and even though I value all of the protestors and street organizers, the stream of outrageous verdicts in police shooting cases finally made me realize that marching is not the best way for me to create the change I’d like to see.

As a result, I decided to shift my mission toward literacy, broadly defined. Poverty, injustice and reading comprehension issues go hand in hand, like white cops and innocent verdicts. On the other side of the spectrum, I believe that the officers who commit these crimes are semi-literate as well, especially in terms of understanding the world of those they interact with on the streets of Baltimore, Ferguson and many other urban places around the country. That leaves us with two groups who can’t communicate, so they clash and it ends in death.

Putting out "The Beast Side" is my first contribution toward combating this national crisis. Telling our stories and educating people are the best things we can do, if we hope to pull ourselves out of this bloody mess. My goal is to write stories that get nontraditional readers excited about reading — as reading saved me.

Before I became a reader, I had no problem breaking a Hennessy bottle across the back of some guy’s head. That type of anger in me was solely attributed to an inability to communicate. It’s the same anger that many officers carry inside them when they patrol the streets, and it’s identical to the rage that burns in the poorest parts of cities. Reading has given me the ability to channel that anger into strategic, solution-based thinking, the kind of thinking that will be key in fixing our cities. I also want to encourage more young and poor minorities to write and raise as much awareness as possible about the ills we all face.

"The Beast Side" also recognizes that killer white cops aren’t the only ones plaguing the black community. Black cops kill us, too. We kill ourselves through violence and by the food we consume from the poisonous restaurants that surround our neighborhoods in addition to some of the food we cook for ourselves. And then there’s the major health-care disparities between blacks and whites, our troubled schools, our poor living conditions, and the many racist policies our system has in place (e.g., the War on Drugs and our ever-growing prison-industrial complex). "The Beast Side" tries to shed light on all of the factors that negatively affect our communities and the many ways that society tries to bury us, not realizing that we are seeds, growing into the change that has been forcing our nation to reform. I was once a part of this vicious cycle in many capacities, so I have some valuable insight to share on coping mechanisms, what’s needed in our neighborhoods, and some of the things that saved many of the people I grew up with.

I hope "The Beast Side" will do the same for many, by exposing these problems, sparking a national dialogue for change, challenging our elected officials and inspiring others to look deeper and to fight the underlying, systemic ills responsible for our pain.