The Trump resistance vs. the Tea Party: So far, a story of immense potential — and great danger 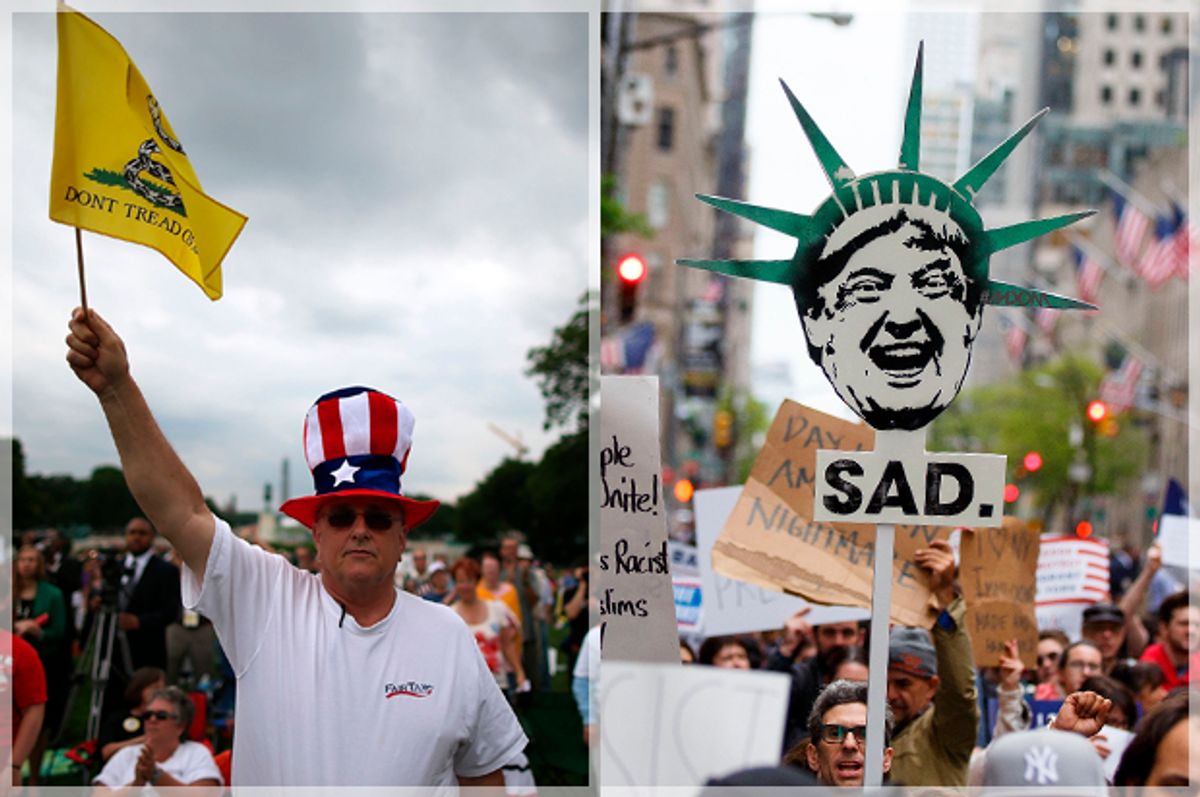 Shortly after Donald Trump’s victory last November, calls for the left to form its own version of the Tea Party to resist the newly elected president were almost instantaneous. Panic-stricken at the mere thought of a Trump administration, liberals and progressives found something vaguely comforting in the idea of a “Tea Party of the left.” Although it was never quite clear how people envisaged such a thing, it is obvious why the right-wing movement came to mind. The Tea Party was, after all, largely successful in transforming American politics and paving the way for Donald Trump.

It is easy to forget that just eight years earlier the Republican Party looked doomed as a national party. Barack Obama had been easily elected as the first African-American president and Democrats had gained seats in both the House and Senate, giving the party control of both the executive and legislative branches for the first time in nearly 15 years. In other words, the “emerging Democratic majority” seemed inevitable — and so did the death of the Grand Old Party.

Looking back, it certainly seems possible that the GOP would have continued down this death spiral had it not been for the Obama backlash that manifested itself in the Tea Party. That movement mobilized thousands if not millions of Americans (with the help of billionaire donors), and eventually led to the Republicans' taking back the House in 2010 and narrowing the Democratic majority in the Senate. But it was the GOP’s success at state and local levels that had a far bigger impact on the future of American politics.

The Republican Party made historic gains in state legislatures that year, winning majorities in 20 new legislative chambers that had been in Democratic hands going into the election. It is now widely recognized, seven years after the fact, that the GOP invested heavily in local and state elections in order to seize control of the redistricting process (which happens every decade following a census year such as 2010).

“Drawing new district lines in states with the most redistricting activity presented the opportunity to solidify conservative policymaking at the state level and maintain a Republican stronghold in the U.S. House of Representatives for the next decade,” explained Chris Jankowski, the Republican strategist behind the notorious REDMAP project. At the time, of course, most people — especially Democrats — were caught completely off guard. The great gerrymander of 2010 was unlike any gerrymandering plan in history, and new redistricting softwares turned the age-old practice into a precise science that secured the GOP’s House majority for at least a generation.

All of this made the Republican Party’s revival (and the Democratic Party’s collapse) possible, and it is hard to imagine that historic turnaround without the Tea Party, which used local and state politics to overcome a clear national disadvantage. It worked in spectacular fashion: Since 2010 the Democrats have lost about 1,000 state legislative seats in total.

It is only natural, then, for Democrats and progressives to look back at the Tea Party for some guidance in 2017, which is exactly what the authors of the widely read Indivisible document did last December, offering  “a step-by-step guide for individuals, groups, and organizations looking to replicate the Tea Party’s success in getting Congress to listen to a small, vocal, dedicated group of constituents.” While their report highlighted the obvious importance of local politics and grass-roots lobbying (e.g. ,town halls, sit-ins, coordinated calls, etc.), the authors also identified characteristics of the Tea Party that should be absolutely avoided — such as ignoring reality, making up one's own facts and threatening anybody who is “considered an enemy.”

In the six months since the Indivisible document was released, people seem to have heeded the calls for a “Tea Party of the left,” and popular protest has become a constant theme of the Trump era. Trump’s presidency kicked off with massive protests against the new president, and the day after his inauguration the Women’s March attracted millions of peaceful demonstrators across the country. Protests have continued since then — on the streets, at town hall meetings, on college campuses — and Republicans have had great difficulty enacting their agenda (thanks in large part to the president’s unwavering incompetence). The Trump presidency has also prompted a huge increase in donations to nonprofit groups like the ACLU, which received six times its annual average of donations in just one weekend after the first version of Trump’s Muslim travel ban went into effect.

Of course, the “resistance” has been far from perfect, and at times liberals seem to be imitating the Tea Party in all the wrong ways. For example, many liberals have also come to ignore reality and create their own facts, while falling for conspiracy theories that bolster their increasingly paranoid worldview (particularly when it comes to Russia). Just as Tea Partiers once accused Obama of being a Kenyan-born Muslim, many liberals are today convinced that Trump is a Russian spy who is guilty of treason.

If the resistance has been all too ready to embrace the Tea Party’s paranoid style of politics, it has simultaneously been too reluctant to adopt the anti-establishment politics that made the Tea Party such a dominant force in American politics. The Tea Party wasn’t committed solely to opposing Obama and his “liberal agenda," but also to challenging the Republican establishment and its “crony capitalist” policies as well (the bank bailouts in particular). While the Tea Party’s grass-roots credibility was always in doubt, as it was largely bankrolled by billionaires and corporations, on the surface it was a populist movement, which made it appealing to those who were not just fed up with one party or one politician but with the whole of Washington.

While there are certainly some populist and anti-establishment elements in the Trump resistance — evinced by certain progressive groups that are challenging centrist Democrats in the primaries — a kind of single-mindedness has limited the movement’s scope. Liberals have become so fixated on Trump and Russia that the Democratic establishment has been able to avoid taking responsibility for the massive failure of 2016, while co-opting the grass-roots energy to serve its own purposes.

The failed campaign of centrist Democrat Jon Ossoff, who raised more than $20 million for a special election in Georgia yet lost decisively to his Republican opponent, was the clearest sign yet that the resistance shouldn't just resist Donald Trump, but also the political establishment that got us here in the first place. Ossoff was the ideal candidate for the DNC establishment: He is young, handsome, educated, articulate and notably averse to progressive policies that are seen as too contentious, such as single-payer health care. (Of course, these policies are only “contentious” with the donor class; they consistently garner support from the majority of Americans in polls.)

In the end, for the resistance to stop Trump and resurrect the Democratic Party -- if that is indeed the goal -- it will have to transform American politics as the Tea Party did before it. This is no easy task, and while the Tea Party helped raise the GOP from the dead, it also created the party’s very own Frankenstein monster in the process — the orange-hued monster is now the public face of the party.

If the left plunges further into conspiracy theories and magical thinking, while avoiding larger questions about how to transform America and tackle major problems like inequality and political corruption, it may end up creating its own partisan monster while hastening the decline of our democracy. If, on the other hand, the grass-roots energy that has been inspired by Trump's election can be harnessed to create a sustained popular movement, then the Trump resistance could have an even greater impact on American politics than the Tea Party ever did.