"There's no crying in baseball!": "A League of Their Own," a film about the sport's women pioneers, resonates at 25 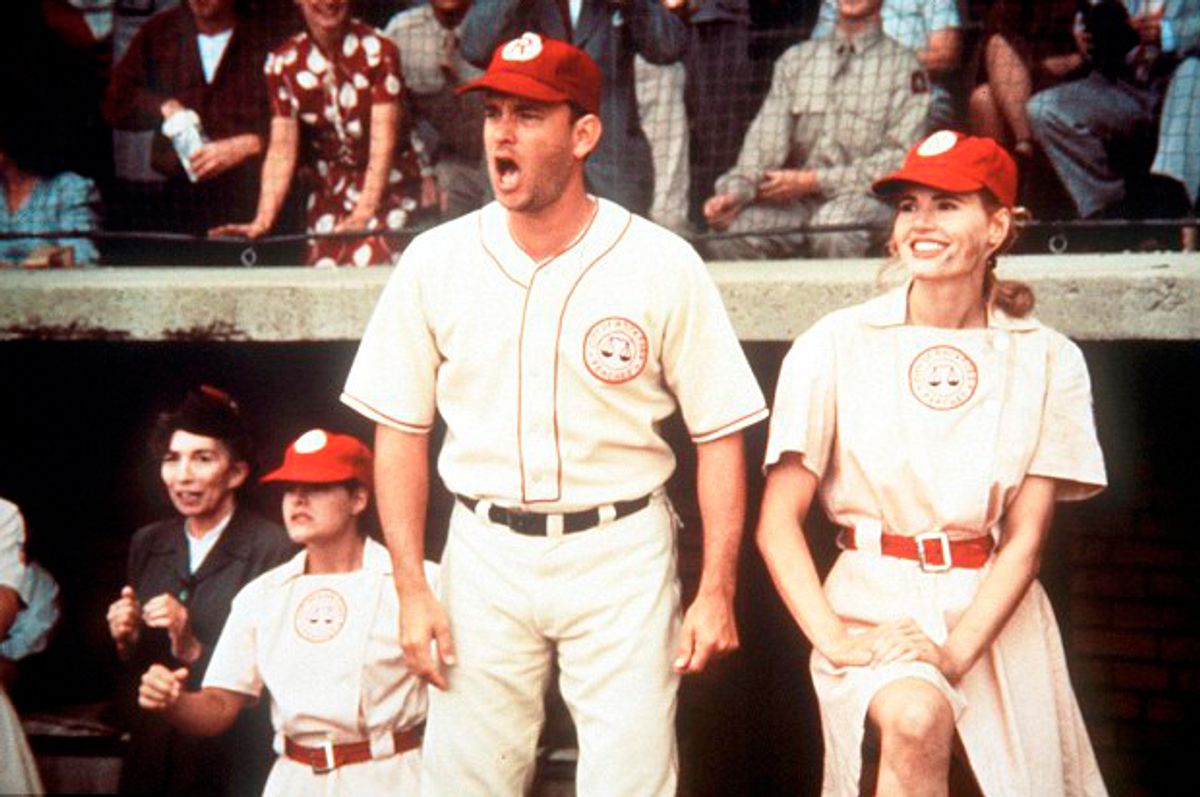 It's easy to get sentimental about baseball. Not only is the sport conducive to majestic tales of redemption and/or heartache — look no further than the 2016 World Series, as any long-suffering Cubs or (sob) Indians fan will attest — but its penchant for attracting colorful characters makes for compelling narratives. It's no wonder the baseball films genre thrives: When the sport's dramatic tension is paired with Hollywood razzle-dazzle and story-shaping, the results are weepers such as "Field of Dreams," rom-coms akin to "Fever Pitch," or screwball comedies like "Major League."

On July 1, 1992, another indelible baseball movie, "A League of Their Own," landed in theaters. The Penny Marshall-directed film details a fictionalized version of the first season of the All-American Girls Professional Baseball League, a real-life, all-women league founded by Cubs owner P.K. Wrigley that operated from 1943 to 1954. Plot-wise, the focus is mainly on the ups and downs of the Rockford Peaches. The team makes the league's World Series and squares off against the Racine Belles, a matchup made all the more dramatic because it pits two sisters, Dottie and Kit Hinson, against one another.

The movie grossed $107.5 million against a budget estimated to be $40 million, and was nominated for two Golden Globes. This success can largely be attributed to the cast. Tom Hanks was fresh off a couple of career duds ("The Bonfire of the Vanities" and "Joe Versus the Volcano") but portrays the Rockford Peaches' recovering-drunk manager, Jimmy Dugan, as a stern teddy bear. Geena Davis, just a year removed from the career-making "Thelma & Louise," also shines as no-nonsense star catcher Dottie, who is stoic about her husband's Army stint.

Madonna and Rosie O'Donnell, meanwhile, play to type: The former is a wisecracking, cigarette-smoking sexpot nicknamed "All the Way Mae," while the latter is a tough-talking, take-no-guff New Yorker with a thick, gruff accent. The next tier of actors is just as good: Lori Petty plays Dottie's petulant younger sister, Kit, who can't stand to be in her older sister's shadow, while Jon Lovitz is a sexist, fast-talking scout. "Did you promise the cows you'd write?" he sneers at the sisters, after they leave jobs working at a dairy for the baseball league.

"A League of Their Own" has its Hollywood cliché moments (a Carole King song at the beginning, a player depicted as homely who magically finds true love), but it doesn't treat players like novelty acts or caricatures. That's testament to the script's attention to detail and the athletic talent on display: The actresses trained for months for their roles, reportedly did their own baseball stunts and played actual games so Marshall could get authentic footage.

Of course, it helps that the creators were invested in telling the story correctly. The movie was co-written by Kelly Candaele, brother of ex-major leaguer Casey and the son of an ex-AAGPBL player. (His aunt played in the league, too.) Another ex-player, Lavon "Pepper" Davis, was a consultant on the film, and approved of the finished product, according to the Los Angeles Times. "[The filmmakers did] a fine job," she said in 1992. "It captured our spirit. We were funny at times and dramatic at other times and always good ballplayers. The movie showed that."

That complexity shone through as I rewatched the movie for the first time in years to write this piece. Although the players fit several well-trod tropes, they're not defined or demeaned by these categorizations; there's a palpable sense that everyone is bonded together within this new endeavor. The women respect one another during embarrassing moments — such as when an illiterate player was caught in front of the entire league unable to read her own name, and then is tenderly saved by a future league-mate — and provide support through rough road trips and lonely nights. That solidarity is portrayed as a nonchalant fact, not a rah-rah experience, which makes it sincere and meaningful — less like forced empowerment and more like genuine friendship.

Viewing the movie with fresh eyes was also a surprisingly emotional experience. World War II's disruptions occasionally rise to the foreground in poignant ways, which creates subtle depth. There's a scene later in the movie when a man shows up to deliver a telegram from the military, which means one of the players' husbands has died in the war. The tension is unbearable: Hanks yanks the message away and slowly walks around the room until he reaches the recipient of the unthinkable news, who quickly becomes inconsolable. The very next scene shows Davis alone in her room, sobbing in relief and grief.

In his contemporary review, Roger Ebert astutely pointed out that Marshall's presence and approach also brings nuance. "Marshall shows her women characters in a tug-of-war between new images and old values, and so her movie is about transition — about how it felt as a woman suddenly to have new roles and freedom," he writes. For example, when outfielder Evelyn Gardner is forced to bring her high-spirited son, Stilwell, out on the road with the team, the sacrifice she's making to follow her dream is loud and clear. Although her teammates are initially irritated, they all grow to tolerate, if not actually like, the kid.

And then there's the strained relationship between Kit and Dottie. Their interactions start off somewhat predictably, with a stereotypical big sister-little sister dynamic, but the schism evolves and resolves itself naturally as the movie progresses. Kit hits her stride at the expense of her sister, but her personal growth overall feels entirely due to her own realization that she needs to grow up.

On the downside, it's disconcerting how many of the sexist asides still feel familiar and relatable today. The players are required to wear uniforms with provocative short skirts, while any carousing is quashed via strict team rules about nights out and mandatory charm school attendance. A retrogressive radio report about the baseball league intones that "careers in higher education are leading to the masculinization of women, with enormously dangerous consequences to the home, the children and our country. When our boys come home from war, what kind of girls will they be coming home to?" These are all supposed to be hallmarks of the 1940s, but the shaming mind-set behind them — especially a disapproval of ambition and harsh expectations of how women "should" act in public — lingers in the modern world.

In a testament to the endurance of "A League of Their Own," the movie was named to the National Film Registry in 2012. Media-wise, it opened the doors for other chronicles of women athletes, such as this year's "The Founders," a documentary about the groundbreaking LPGA pioneers, or the short-lived TV drama "Pitch," which is about a woman breaking Major League Baseball's gender barrier. On a more sobering note, the movie's power imbalances are also relevant to today's professional sports landscape:  Take the example of the U.S. women's soccer team, whose battle for equal pay and working conditions made headlines last year.

In another moving moment in the film, real AAGPBL veterans gather at the Baseball Hall of Fame with actresses, in a scene simulating the pioneers' being inducted into the museum. An actress playing an older version of Geena Davis attends and runs into the now-adult Stilwell, who sadly reveals his mom passed away a few years before.

"When I heard about this [gathering], I just felt like I owed it to her to be here," he says, the regret, wistfulness and sadness evident in his facial expression and vocal inflections. "She always said it was the best time she ever had in her whole life." The moment is wrenching and resonating, as it summarizes how important "A League of Their Own" is not just to pop culture, but to the real-life women who played in the league.

A League Of Their Own Baseball Enterntainment Women In Sports