Why we’re obsessed with millennial pink — the concept, not the color 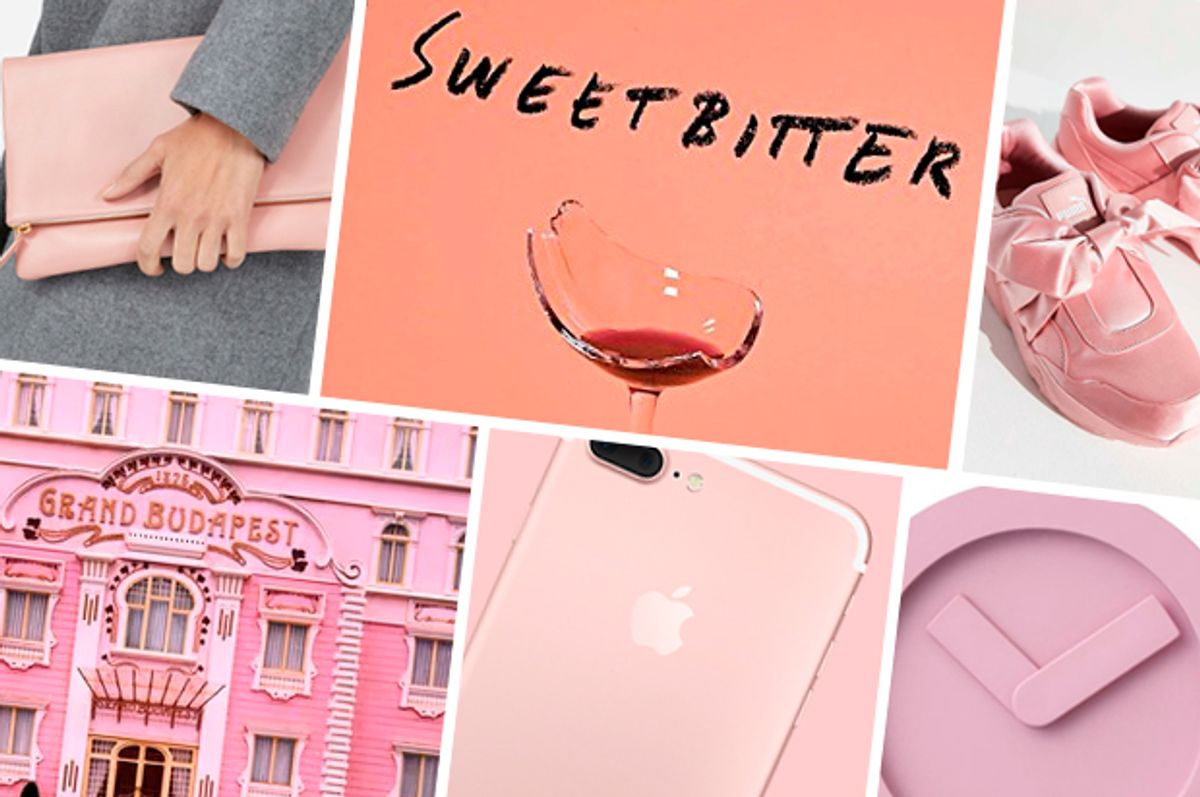 The rose-gold iPhone, “The Grand Budapest Hotel,” Glossier packaging, Thinx print ads, the cover of Stephanie Danler’s pop-novel “Sweetbitter,” the shag pouf in the showroom you wish your living room could pull off. The common denominator? The aesthetic trend the world can’t seem to get enough of: millennial pink.

More than a seasonal fad, the color is here to stay, at least for a while, and it’s everywhere. The shade itself is not exactly well-defined — at any given time, “millennial pink,” or even “Tumblr pink,” refers to shades of blush, rose, grapefruit, salmon, adult bubblegum, or somewhere in between. It's like the untouched pink shelves of a girly childhood bedroom, covered in a thick film of dust. Pantone coined it “Rose Quartz” and named it Color of the Year in 2016, but the shade has been gaining momentum for years. Fashion house Acne Studios rolled out their signature pink shopping bags all the way back in 2007.

Despite the color’s apparent rampancy, not everyone knows it by its adopted name, and for many its prevalence hasn’t even registered. Mention “millennial pink” to the eponymous generation and you’ll get a mixed bag of reactions that range from “OMG I bleed millennial pink” to “literally what are you even talking about.” (The latter usually offers a slow, knowing nod after a quick image search.) Love it or hate it, few would deny the reign of Millennial Pink.

For non-aesthetes, it’s hard to wrap our heads around a cheeky hue reminiscent of our once-treasured Crayola boxes having any cultural significance. By why wouldn’t it? Designers would balk at such a primitive understanding of color, a la Meryl Streep’s iconic takedown of Anne Hathaway’s cerulean blue (Pantone’s 2000 Color of the Year) sweater in “The Devil Wears Prada.” Others who would explain the shade’s prevalence by noting that it’s “pleasing to the eye” are similarly missing something. Clearly there’s some meaning behind the staying power.

Historically speaking, this isn’t the first time a color scheme has defined a generation or a decade. Think of the psychedelic, swirling brights of '60s hippies, and the way the pendulum swung in the opposite direction in the '70s, toward a vomit schematic of browns, olives, mustards and rusts that signaled a departure from the flower-child aesthetic and archetype.

So what about our time? Why are we so obsessed with this shade of pink? Considering its endurance, calling it a trend is a cruel underestimation. For all its lack of specificity, millennial pink can certainly be defined in part by what it’s not. For decades, pink not only denoted a gender (ahem, baby blankets), but came to symbolize a kind of hyper-femininity, manifest in shades probably borne of the Barbie craze — bubblegums, fuchsias, magentas and hot pinks often used to boldly assert one’s girlishness.

But as gender sheds its once-binary definition in favor of a more complex, inclusive and comprehensive one, pink is undergoing a similar rebranding, rejecting the increasingly defunct girly-girls-only interpretation of femininity. With the rise of identity politics and the gender and sexuality dialogue approaching its zenith, it seems obvious that this generation’s creative types would, knowingly or unknowingly, foster an aesthetic that followed suit, the color’s softer nature mirroring the softening of rigid gender boundaries. Millennial pink is like the next-gen version of the early 2000s’ favorite t-shirt expression “real men wear pink,” like a “real people wear pink” for the modern age. It’s a pink for everyone because, hey, it’s not pink, it’s millennial pink.

It’s hard to say with any precision, but millennial pink might be peaking. As so often accompanies the explosion of a uniquely creative concept, especially one with a progressive political angle, in rolled the market analysts and the hungry startups who correctly identified the color as a money-maker. As millennial pink’s popularity surges, the profit-seekers dilute its significance, and the tastemakers are losing their stronghold. When a design trend turns into a market trend, it usually means it’s the beginning of the end.

Still, however long millennial pink remains the it-color doesn’t really matter. It has completed its gender-bending mission with aplomb. And anyway, isn’t there some whimsical delight in the zeitgeist finding physical manifestation in a pretty, pretty pink?