Under Trump, religious right leaders plan a big comeback: "We are in a war for the future of this republic" 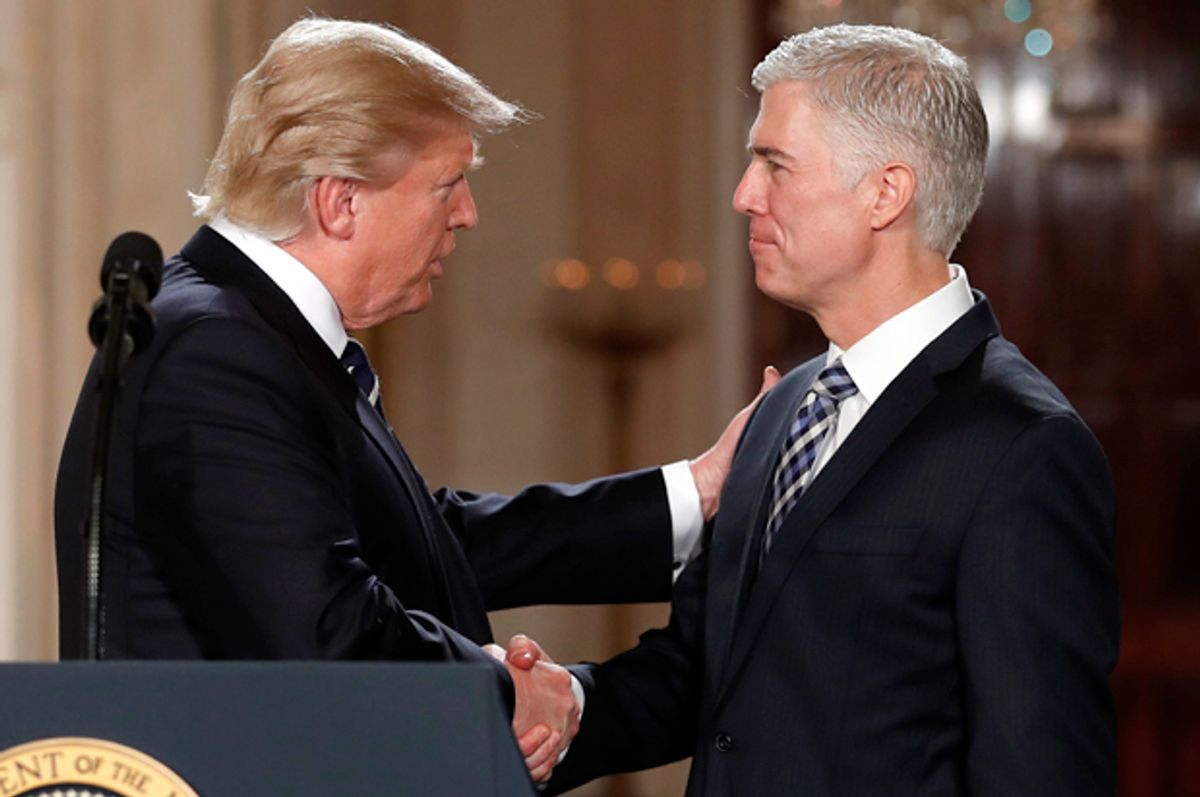 This story was originally published on Right Wing Watch.

The entire Trump presidency has been pretty much a nonstop horror show for progressive Americans, but the month of June made it clear that if you are worried about President Trump and the Republican Congress rolling back advances made during the Obama administration, you aren’t worried nearly enough. Right-wing strategists seeking to undo what they see as federal overreach are looking back as far as the New Deal, and some even further, to the Progressive era at the turn of the 20th Century. With Neil Gorsuch on the Supreme Court and hundreds of Gorsuch-like judicial nominations in the pipeline, they’re making big plans.

Earlier in the month, the Faith and Freedom Coalition’s “Road to Majority” conference brought Religious Right activists to Washington, D.C. The atmosphere was triumphalist, almost giddy, in sharp contrast to previous years’ complaints about Barack Obama and dire warnings about a potential Hillary Clinton presidency. Religious Right leaders had hitched the movement’s wagon to the Trump train, and they had already begun reaping the rewards.

Candidate Trump had overcome conservative Christians’ qualms about his character with a set of too-good-to-resist promises. He said he’d give them the Supreme Court of their dreams and he pledged to make them more politically powerful by doing away with restrictions on churches’ political activities. He won their trust by making one of their own, Mike Pence, his running mate. Religious Right leaders pulled out all the stops to help Trump rack up a massive margin of victory among white evangelicals.

Trump spoke at the event’s opening luncheon, where Reed declared, “We love him because he is our friend.” Trump in turn told the conservative Christian activists, “You didn’t let me down and I will never, ever let you down, you know that.” And, offering a subtle olive branch toward activists who were disappointed that last month’s executive order on religious liberty did not include sweeping exemptions for anti-LGBT discrimination in the name of religion, Trump assured them, “Believe me, we’re not finished yet.”

A number of Trump actions won loud cheers, including his withdrawing the U.S. from the Paris climate accord and his sweeping ban on foreign aid funds going to groups that even support, much less provide, access to abortion. But by far the biggest prize for Trump’s right-wing supporters was the Supreme Court seat that McConnell kept vacant for a year by refusing to allow Senate consideration of Barack Obama’s nomination of the widely respected Merrick Garland. For that step alone, McConnell has entered the Religious Right’s pantheon of heroes.

Religious Right leaders have a half-century-long grudge against the Supreme Court over rulings on church-state separation, the right to privacy, legal equality for LGBT Americans and more. Religious Right leaders were thrilled when Trump nominated Gorsuch. They rallied support for his nomination and celebrated when he was confirmed. They made it clear that they are counting on him to undermine the separation between church and state. National Organization for Marriage President Brian Brown saw in him the first step toward overturning the Supreme Court’s 2015 marriage equality ruling. Anti-abortion activists are dreaming of the day that Roe v. Wade will be overturned.

But today’s conservative evangelicals are interested in far more than abolishing legal abortion and reversing civil rights gains for LGBTQ Americans. Much of the Religious Right is also fully committed to the Tea Party’s radically restrictive view of the proper role of the federal government. At Road to Majority, Trump adviser Steven Moore said the government should get out of education and health care. That stance draws on both a right-wing ideological view of the Constitution and a Christian Reconstructionist worldview that God did not grant government the authority to be involved in education or the alleviation of poverty, jobs that they believe He assigned to the church and family.

Sen. David Perdue of Georgia gave one hint about what Cruz might mean, declaring, “We are in a war for the future of this Republic.” Perdue cited the New Deal and the Great Society as consequences of periods with Democratic political dominance. “The great progressive experiment of the last 100 years, with bigger and bigger government, has failed, period.”

A primary vehicle for reversing the “great progressive experiment” will be by packing the federal courts with judges committed to a far-right view of the Constitution and laws. Gorsuch was part of Trump’s list of potential justices pre-approved by the Heritage Foundation and the Federalist Society, which has been working for decades to achieve right-wing ideological dominance in the federal judiciary. In 2001, during the first 100 days of the George W. Bush administration, the Federalist Society held a forum on “Rolling Back the New Deal.” While the Obama administration interrupted that effort, a Trump administration and a Republican congressional majority could put it back on track.

This year’s Road to Majority featured a session with a group of GOP staffers from the White House and Congress: Paul Teller, a special assistant to the president for legislative affairs and liaison to conservative members of Congress and movement groups; Erica Suares, a policy adviser to McConnell; and Will Dunham, policy director for McCarthy.

Teller has clearly adopted his boss’s hyperbolic style, describing Trump’s first few months as “fantastic,” with “great success” on healthcare and a “huge, huge, huge victory” with the Gorsuch confirmation. He said that getting Gorsuch on the Supreme Court is “something that is really going to change America.” Another Supreme Court nominee, he said, would let Trump create “epic, titanic shifts.”

Suares, who said that McConnell has “a laser-like focus on judges,” echoed Teller, saying another Supreme Court nominee could “fundamentally change the country.” What kind of change? She cited government programs that Democrats had passed when they had wide congressional majorities, including the New Deal and Great Society. Said Suares, “We now have to undo so much.”

Suares said that, along with lifting the economy, a major goal for Republicans is making sure that legislation is geared to “shifting the culture” toward a more limited role for government. Suares celebrated the “100-plus” vacancies on the federal courts, acknowledging “a lot of that is because of what we did last year and the year before” with “slow-walking” Obama nominees. Legislation has its ups and downs, she said, but “with these lifetime appointments, we can really change the country in a short period of time.”

Faith and Freedom Coalition executive director Tim Head picked up on that point, saying that there are 120 positions open on the courts “because of the, uh, deliberation of the Senate” during the Obama administration. He said that during an eight-year period, typically about 400 federal judges would be replaced; adding that number to the current vacancies could mean 525 new judges in a two-term Republican administration, something he called “extraordinary.”

Dunham, who formerly worked at the Heritage Foundation and the Republican Study Committee, agreed that for conservative activists there is “pent-up frustration” with eight years of Obama, “and even further back, all the way back to the New Deal.” Said Dunham, “We are, one piece at a time, incrementally, slowly but very surely, restoring freedom in America.”

McConnell himself said that he was looking forward to Trump nominating Gorsuch-like judges for every judicial opening, giving him an impact “far beyond his time.”

Not long after Road to Majority, Gorsuch gave Religious Right leaders evidence that he will indeed be the far-right justice they have longed for. He joins Clarence Thomas and Samuel Alito at the far-right end of the bench, signaling a willingness to further dismantle regulations on money in politics, undermine church-state separation, and reverse gains on LGBT equality. Right-wing activists celebrated Gorsuch’s end-of-term contributions as a harbinger of things to come.

One other point worth noting: Religious Right leaders have been telling their supporters — and Trump himself — that he is on a divine mission. Religious Right leaders had warned that the election of Hillary Clinton would mean an end to religious freedom in America. They had given their supporters dozens of religious rationales for supporting Trump, declaring him anointed by God to save America by destroying political correctness and bulldozing the Washington establishment. During a Road to Majority session on Capitol Hill, McCarthy said of Trump’s election, “I think that was God’s hand.”

At Road to Majority, author Eric Metaxas was one of those portraying Trump’s election as a sign that God has given America one more chance to stave off His judgment, saying, “the governor of the universe has given us a reprieve in this election but we now need to stand and fight.” Rep. Barry Loudermilk, R-Ga., told Road to Majority activists that he is “genuinely excited about what God is doing in America right now.” He said God had given Americans “an opportunity to have a re-founding of our nation” and return it to “those ideas of our founding fathers, those principles, those things that our founders were clear were biblical mandates.” Loudermilk said Election Day was like the landing at Normandy, with the real fight ahead against the enemy, which he defined as “an ideology that is destructive not only to our ideas but to mankind altogether.”

During a Road to Majority session on Capitol Hill, Meadows, whose Freedom Caucus is most closely identified with hostility to big government, demonstrated the extent to which the Tea Party and Religious Right have always been overlapping movements. Meadows told Faith and Freedom participants that he was their “brother in the Lord” and that “we have work to do to take this city and return it to its rightful place to honor God and faith.”

Meadows also echoed Religious Right leaders’ claims about religious persecution in America, saying “there is an attack that is going on.” It’s OK, said Meadows, “to be of a faith as long as it’s not a Christian faith, in this city.” There is an effort, he said, “to silence the pulpits and the pews across this country.” Meadows urged attendees to pray for President Trump, who he said “is trying to do what he can do for the unborn and for marriage” and “Judeo-Christian values.” Meadows said “the option of failure is not possible” because “our God still reigns over the affairs of nations.”